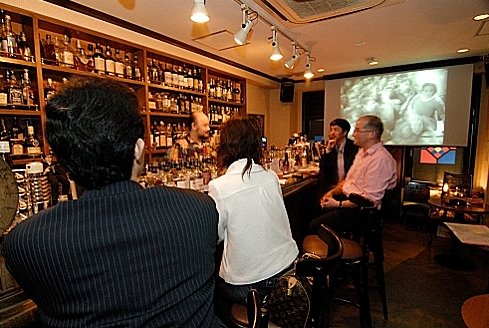 Photograph of Zoetrope by Tony McNicol

Zoetrope is the best place in the world to drink Japanese whisky. It is that simple.

Atsushi Horigami has 250 Japanese whiskies on his shelves and 100 other bottles, including Japanese rum, Japanese vodka and even Japanese grappa. The focus, as you have already surmised, is on Japanese alcohol, and specifically Japanese versions of foreign alcohol. Among the intriguing bottles that I will definitely be returning to sample was a couple of versions of Suntory`s fabulously named "Special Mysterious Whisky", so called not because of some nefarious blending ruse but because of a hook up with the Mystery Writers of Japan association.

Zoetrope is the only independently run bar specialising in Japanese whisky. Unlike the bars run by Suntory and Nikka, it therefore offers a full range of Japanese drams including Nikka, Suntory, Karuizawa, Mars, Eigashima, Ichiro`s malt and I am sure a few others that I have never heard of. Atsushi himself is a very engaging man with an infectious enthusiasm for his subject. He has all sorts of goodies under his bar: a facscimile of Masataka Taketsuru`s diary from Scotland and a full Nikka "Rare Old Whisky Bottle" from the 1960s are among the treasure trove.

It is probably only in Japan that you could call a bar "definitive". Zoetrope is the "definitive" Japanese whisky bar. Yet, despite the incredible range of drinks on offer, Zoetrope lacks that slightly obsessive edge you get in some Tokyo specialist establishments. The theme of the bar itself has nothing to do with whisky: at the far end of the bar there is screen showing a continuous loop of silent movies and the sound track is randomly selected from more modern film soundtracks. The name comes from a 19th Century device that prefigured moving pictures - a drum with slits in the sides which, when rotated, animated a series of pictures arrayed around the inside of the cylinder. Horigami-san has a zoetrope under the bar to show anyone who asks. I am not quite right when I say there is no connection between the film theme and whisky: zoetrope means wheel or circle or living wheel which of course has a nice resonance for fans of the water of life (uisge-beatha, whisky).

Taylor Smisson switched me on to Zoetrope. His review of the bar is here.

Opening hours
7pm to 4am
Closed Sundays and national holidays.

Directions:
Zoetrope's Map
A google map of Zoetrope (far better than the bar's own version) is here.
Basically, go out of either the east or west exits or Shinjuku station (the east is slightly easier) and walk north, with the tracks either to your immediate left or immediate right until you get to the big underpass under the tracks. There should be a stream of people passing under the tracks to go and get their rocks off in Kabukicho. I have marked it with a red cross on the map. If you are to the the east of the tracks, go under the underpass. If west, stay where you are. You should be able to find it using the google map from there.


The photograph was provided by Tony McNicol, a journalist and photographer who was interviewing me at Zoetrope.
Email Post
Labels: Atsushi Horigami Bar Shot Bar Zoetrope

Kel said…
Going to Tokyo next week and would love to try this place. Was it very expensive for a drink? I'm so worried that everything will be just too much!
July 15, 2008 at 2:29 AM

cocktail:30 said…
Taking Nonjatta's advice I paid a visit to Zoetrope on 6/19/08. I found the prices to be quite reasonable. I opted for the premium sampler, which included the 20 Year Yoichi Single Malt *1987*, while my companion had a non-scotch cocktail. Atsushi Horigami is a great guy to boot! I highly recommend Zoetrope as a "must visit" locale for anyone visiting Tokyo!
July 15, 2008 at 7:52 AM

negz said…
I recommend going even if you're worried about the price. I went around November 2008 - I was the only one in the bar and Horigami-san was brilliant. Though I don't speak Japanese I received an education in Japanese single malts. He poured me a few half drams of his favourites, which I gather were fairly expensive, so I could try them at a reasonable price.
July 16, 2009 at 10:50 PM

Kharnifex said…
Horigami still delivers, I visit as often as I can, great nostalgia. Amazing Single Malts.
January 9, 2013 at 7:38 PM