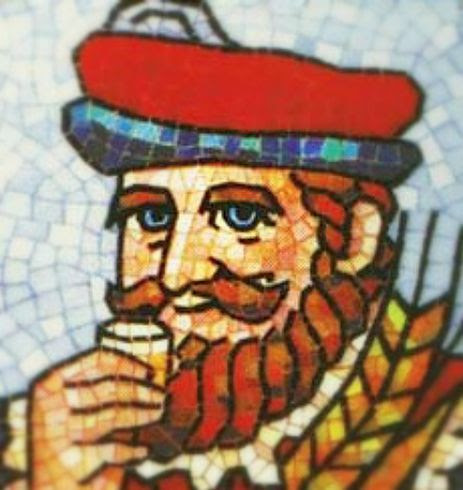 A few weeks ago I asked readers if they could help identify Nikka whisky`s iconic "King of Blenders"? To those not living in Japan this may seem an abstruse topic but the logo is ubiquitous in Japanese liquor stores. I need to know whose icy blue eyes are staring at me from every bottle of Nikka Black.

Well, Taylor Smisson has written in with a definitive answer. Nonjatta has mentioned Taylor before. I`m not sure he would thank me for saying this, but he is the doyen of whisky drinking foreigners in Japan. Until earlier this year, his "Malt Drinkers Diary" website tracked a "bottle-by-bottle journey through the city that is the Scotch single malt drinker's heaven on earth: Tokyo." He finished that project this April but not before he had tasted more than 4,000 malts. 4,000!

I am just going to dump his very thorough bearded man research straight onto the site. It might make the post overly long but this information has not been brought together anywhere else, either in Japanese or English:


The person that Nikka refers to as

is apparently W. P. Lowrie (William Phaup Lowrie) who founded W.P. Lowrie & Co. Ltd and after whom the "Lowrie's" blended Scotch was named. He is referred to in various whisky books and some whisky websites but I have not found any with more than a few paragraphs on him. Some references with excerpts are below:

The Chameleon's Eye, James Buchanan & Company Limited, 1884-1984. Brian Spiller (James Buchanan & Co Ltd, London & Glasgow, 1984) Page 14: "He [James Buchanan] borrowed the money to start his business from William Phaup Lowrie of Glasgow, one of the largest stockholders of Scotch whisky and a leading figure in the industry. Buchanan described him as an old friend who 'largely contributed to my prosperity, and through his firm I drew my stocks.' No record of the agreement survives, but the circumstances suggest that it had advantages for both parties. Lowrie had enough experience to recognize a good commercial risk. Born at Dalkeith in 1831, he had served an apprenticeship in the Commercial Bank of Scotland before being employed by John Ramsay, MP, in the management of Port Ellen Distillery on the Isle of Islay, and of Ramsay's agencies for wine and spirit producers. According to his own public statement, 'he thought he could lay claim to be the first to begin the bottling of whisky in an Inland Revenue warehouse.' It was not until 1869 that he set up his own business in Glasgow as a wine and spirit broker and commission agent. Agencies were acquired in Scotland for Gonzalez Byass sherries, Renault brandy and Charles Heidsieck champagne. A bonded warehouse was opened at 30 Washington Street and a cooperage in Hydepark Street. It has been stated that Lowrie revolutionized the cooperage trade by arranging to have staves cut, in the forests of America, to standard sizes. The wine-seasoning of casks was his patent. He was one of the largest holders of whisky stocks in 1884, when malt whisky production had been expanding almost without a break for twelve years. The trade press noted in January that prices for all categories of whisky, which had been steady through the previous year, had begun to collapse. The fall looked like becoming prolonged and severe, so that holders of stocks bought at the higher process would have problems in reselling at a profit. In this situation, it made sense for Lowrie to support a whisky merchant who might become a useful customer."

The Whisk(e)y Treasury. Walter Schobert (Angels' Share, an imprint of Neil Wilson Publishing Ltd, Glasgow, 2002). Page 211:
"Lowrie's: Scotch blend from GuinnessUDV which bears one of the most significant names in the history of Scotch whisky. It is named after William Lowrie who in his youth worked at Port Ellen and in 1869 became self-employed and was one of the first to take an interest in developing blends (although the 'official' story credits Andrew Usher with this). The company also claims to have been the first to have bottled in bond. In any case it was important in the blossoming whisky business and not only had its own blending and bottling plant but also made the cases and the bottles itself. There were particularly close connections with James Buchanan whom it initially supplied and who, upon Lowrie's retirement, took over the company. With this company, with which it jointly owned Glentauchers (whilst having sole ownership of Convalmore), it passed to DCL."

Scotch Whisky, A Liquid History. By Charles MacLean. Cassell Illustrated, London, 2003. Page 111: "William Phaup Lowrie (1831-c.1910) himself maintained that he thought he could lay claim to be the first to begin the bottling of whisky in an Inland Revenue Warehouse. This has been interpreted as implying that he was 'the first blender'. Neil Wilson thinks not: 'he was later erroneously credited for having initiated these practices in Scotland…he did introduce some innovation into the production and marketing of Scotch which remain with us today.'"

Scotch, The Formative Years. Ross Wilson (Constable & Company Ltd, London, 1970). Page 487:
Wilson states Lowrie died in 1916. [Nonjatta: this was two years before Taketsuru made his historic visit to Scotland so the two men can never have met.]

There is also the puzzle of Nikka's frequent use of honorifics for their bearded icon. They often refer to him as

, or "Lowrie Kyoh", which implies he had a knighthood. And there is also the "King of Blenders" title, which Nikka sometimes implies was bestowed on him in Britain because of his formidable reputation. It seems Nikka has its own Order of the Crane and has been bestowing the honours itself, because Taylor has found no trace of them in the UK:


I could find no reference in English to Lowrie being referred to as the "King of Blenders" or anything similar, and I could not find a reference referring to Lowrie as "Sir Lowrie"as denoted by "Lowrie Kyoh".

The final puzzle is the bearded man's dress. It is not what you would expect someone who lived in the mid to late 19th Century to be wearing. It is more Tudor. Perhaps it is a bit of a relief that this last fragment of the bearded one's modesty remains intact. Taylor says:


My best guess is that somewhere along the way the inability of katakana to distinguish between "Lowrie" and "Raleigh" resulted in W.P. Lowrie and Sir Walter Raleigh somehow being merged in a "The Fly" like mishap, but I doubt we will ever know for sure exactly what happened.

Also, there are references to Sir Walter Raleigh creating (blending?) the "Great Cordial" while he was imprisoned in the Tower of London so that tale might have added to the confusion.

Now I can look the King of Blenders in the eye!
Email Post
Labels: Nikka