I set up Nonjatta in 2007 after a chance encounter with a bottle of Japanese whisky in a supermarket outside Tokyo. I'm now mothballing the site.
Nonjatta and the projects springing from it have been covered by media organisations including the Guardian, Reuters, the Los Angeles Times, the New York Times, El Globo and many others. We've been nominated for the James Beard Award. We've published three great books that have been translated into three languages. We've played our part in telling the story of Japanese whisky.
But it's time to call it a day. All the content will stay up and you can still contact us, but we're moving on to new projects.
Nonjatta wasn't particularly pioneering. There was some really useful information online about Japanese whisky before I first posted in 2007. I remember Serge Valentin's Whiskyfun.com website being a particular inspiration, Takeshi Mogi's site (gone but not forgotten) was a great source in the early days, and writers like Dave Broom were already well aware of Japanese whisky's virtues. Japan's distilleries were already making a habit of winning international competitions.
But Nonjatta filled in detailed background and was written by enthusiasts who were living in Japan and who were enjoying its thriving scene. We are proud of what we contributed and we want to thank all our readers for their contributions, interest and support. We've been quite a hive of activity:

In 2017, Stefan Van Eycken, the driving force behind Nonjatta after I left Japan in 2011 who took the site to new heights, published 'Whisky Rising', a definitive guide to the subject that has been translated into Chinese and Japanese. He has contributed extensively to the whisky press and is the innovator behind the charity event Spirits for Small Change and the Ghost series bottlings, among many other things.

In 2011, I published 'Drinking Japan', which I have bored everybody rigid claiming it was the first comprehensive guide to Japanese alcohol in English. The point of the book was to convince readers that Japanese alcohol culture ≠ sake (and Japanese spirits ≠ whisky.)  It told the stories of sake, shochu, Japanese whisky, awamori, Japanese wine, Japanese beer, and an extraordinary bar scene. It came second in its category of the Gourmand Awards, the world cookbook awards,(and top among English-language guides) and was republished in an updated edition in French in 2014. 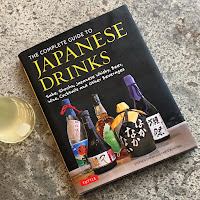 This year, Stephen Lyman and I were nominated for a James Beard Award for our sequel to 'Drinking Japan', "The Complete Guide to Japanese Drinks". We were up against Jancis Robinson, Hugh Johnson and Oz Clarke in the final and lost out to the 'World Atlas of Wine.' We both felt it was a great honour. Stephen has completely overhauled what I wrote in Drinking Japan and I think 'The Complete Guide' is an essential read if you want to understand Japanese alcohol.
When I first posted on Nonjatta, there were no books in English devoted to the broad acres of Japanese alcohol beyond sake. Now we are almost spoiled for choice. I want to mention Brian Ashcraft's Japanese Whisky, published in 2018, David Broom's "The Way of Whisky," published in 2017, and Chris Pellegrini's "Shochu Handbook", published in 2014. They are all excellent books, there have been other great contributions, and I know there are more in the works. It is very exciting.
In the meantime, I am going to try over the next few weeks to make it a bit easier to browse Nonjatta's more than 800 posts (spread over three days short of exactly a decade, from 5 April 2007 to 2 April 2017). Thanks to Stefan and all of the other people who made this site a joy to maintain (including N.N., who did so much behind the scenes). I think it was worth doing.
By Chris Bunting
Twitter @Chris_Bunting
Email Post