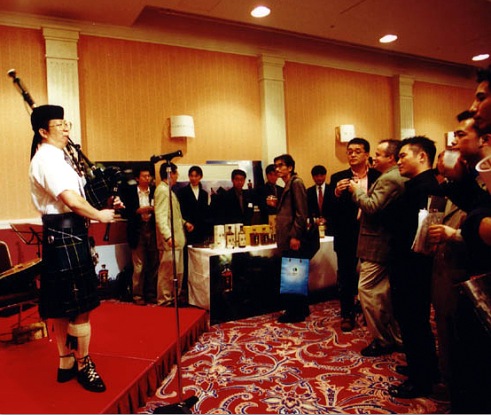 The message about Japanese whisky is just beginning to reach a mass audience. It has been the talk of whisky enthusiasts for several years now but when The Sun has a story on it, you know you are no longer dealing with a minority interest. Here at Nonjatta, readership has been increasing steadily. I was just breaking out the champagne ... er, sorry, Japanese whisky... after passing the 2000 individual readers a month mark, only to find Nonjatta's counter recording 120 and 170 individual visitors a day recently. That is a proper readership.

As we begin to make this transition to the mainstream, it is worth looking back at the relatively small group of people who have helped spread the word. Of course, first credit must go to the distilleries themselves. They are making this excellent spirit, after all. Then there are the dozen or so influential reviewers who have been open minded enough to receive and spread the message - the folks associated with Whisky Magazine and its associated events and competitions have been really vital in this, but so have people like the late, great Michael Jackson, Jim Murray, the Malt Maniacs etc. etc. etc. - and innovative distributors like La Maison du Whisky and the Number One Drinks Company that are bringing this stuff to markets outside Japan.

But there is one person who has really kept out of the limelight who has been an absolutely key figure in this movement: an unassuming pharmacist called Takeshi Mogi.

I met Mogi-san last Friday above his family's drug store, a small shop in one of those endless suburbs that stretch outside Tokyo until the mountains ranges stop them. It is a prosperous enough looking area, in that messy, telegraph wire festooned way that Japanese cities have, but there is nothing particularly remarkable about it.

Mogi-san, however, is a very remarkable man. He was taking a couple of hours out from the daily grind of work in the pharmacy on Friday but, as soon as he was in his tasting room, the mild-mannered chemist was transformed into a compelling and unpretentious interpreter of not only whisky, but a whole range of drinks and other interests. After first seriously getting into Scotch in his twenties, he has become a regular visitor to the mother country. His heart has been left in Islay and the highlands and he says he hopes he can "do something to represent Islay and Scotland to Japan". He has a number of websites in Japanese to tell people about Scotland. He even plays the bagpipes and speaks Gaelic! ("When I first went there, I thought I would need it.")

But it is in spreading the world about Japanese whisky that his influence has perhaps been most profound. Mogi-san's website and a miniature bottle of Hakushu 12 was what first switched me on to this whole Japanese whisky thing, but there are many others far more influential than I who have been helped by the Tokyo pharmacist. Much of his work has been behind the scenes: fixing up tastings and establishing contact between key reviewers and the Japanese distillers. You will often find his name in the acknowledgements at the back of general whisky guides but the small print doesn't begin to tell the full story. It is my impression that a great deal of the coverage of Japanese whisky in some of these guides simply would not be possible without Mogi-san's help.
Email Post

Anonymous said…
"That is a proper readership."

I'm one of your more recent subscribers. It doesn't surprise me at all that you are building a strong readership - your website is first-class in both content and design.

I only tried Japanese whiskey for the first time recently (Yamazaki 10) and it left me eager to try more. I'm sorry to say I was living in Tokyo back in the mid-90s and did not realise I should be sampling the local whiskey product. I'm kicking myself now!
April 30, 2008 at 7:27 PM

Anonymous said…
Thanks for the kind words. I am a big fan of your website - Irish Whiskey Notes - too and recommend Nonjatta readers to take a look (click David`s name at the top of the comment). One of the very interesting things that has been happening with whisky writing recently is these specialist websites - Nonjatta, Irish Whiskey Notes, http://americanhooch.com/
http://www.boysofbourbon.com/
just to name the ones that at the top of my mind at the moment. These are really adding something to the superb more general sites like Scotch Blog, Whiskyfun, Dr Whisky. Their specificity is really valuable and I am fascinated to see where whisky writing on the internet is going to take us. I am sure it is somewhere quite exciting and there are so many other special niches, not just in whisky but in all sorts of drink, that talented writers will be able to explore in fine detail. An extraordinarily interesting patchwork is emerging.Someday, I reckon we should think about stitching together our patches because the depth of coverage that is going to be produced across the drink world will really be something new and exciting for readers.
April 30, 2008 at 8:56 PM

Anonymous said…
"Someday, I reckon we should think about stitching together our patches because the depth of coverage that is going to be produced across the drink world will really be something new and exciting for readers."

That is something worth working towards. I have a lot of content to add to my site in the meantime but I'll certainly be taking a lot of inspiration from Nonjatta and the other sites you mention.
May 2, 2008 at 9:13 AM