It is customary when writing the history of Japanese whisky to talk about two men: Masataka Taketsuru and Shinjiro Torii. Depending on which company's creation myth you are listening to, either Taketsuru or Torii or both brought whisky to Japan in the 1920s.

It is a fascinating beginning, but talking only about Taketsuru and Torii seems to me a bit like trying to write the story of Rome and stopping at Romulus and Remus. Let`s talk about the Caesar of Japanese whisky: Keizo Saji (1919-1999). Without mention of Saji, I don't believe it is possible to properly understand Japanese single malt. 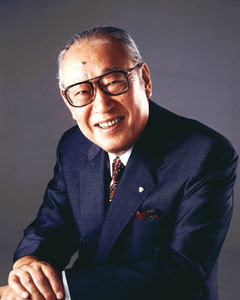 Saji was Shinjiro Torii's second son* and became president of his father's company, Kotobukiya, in 1961. He renamed it Suntory in 1963 and under him the firm developed into the Colossus it is today. During the 1970s, Japan experienced a whisky boom and Suntory was sitting right on top when it went off. It seemed every salaryman had a bottle of whisky waiting for him in his favourite bar. All of this whisky was blended and some of the stuff the office workers were sticking in their "mizuwaris" (very diluted whisky and water mixes) was of dubious quality but, in the midst of all this heavy drinking, Saji became convinced that the market would eventually develop in the direction of premium products. He started to build the "Hibiki" brand, a top quality blended whisky, and quietly began to prepare Suntory's range of premium single malts. In 1984, Yamazaki 12 years old, Japan's first really mass marketed single malt whisky, was launched. The Yamazaki distillery was largely refitted five years later and that investment paid off in 2003 when a Yamazaki 12, laid down after the refit, won a gold medal from the International Spirits Challenge. By that time, single malts from Suntory's deadly rival Nikka were also making a splash globally, but Saji Keizo and Suntory can claim a good deal of the credit for launching Japanese single malts on the world.

Saji's vision has yet to fully play itself out. Men from the 1970s and 1980s generations still, as a whole, have very little idea about the distinction between single malts and blends. They would generally identify a bottle of Johnnie Walker as the very finest whisky money can buy and reflexively stick half a bucket of water and some ice in their whiskies. A boom in the demand among younger people for Shochu, Japan's indigenous spirit, has hit whisky consumption. Shochu has less of a fuddy duddy image than whisky and its producers are now producing a variety of top quality products rather than the tubs of cheap booze that Shochu making used to be associated with. However, in the long run, I think it would be foolish to bet against Saji's assessment. I have a feeling that the real explosion in popularity of single malts will come from the sophisticated younger Shochu drinkers, educated by their adventures in that world and looking for something new, rather than the whisky boomers. Meantime, the top shelves of the liquor stores are filling up with good malts, both Scotch and Japanese.


*Saji was adopted by his mother's relatives, a common practice in Japan, and so took a different surname from his father Torii.
Posted at 6:19 PM

I have this bottle of suntory: president's choice whisky signed by Keizo SAJI (see the pictures) have you an idea of his history?
thank's
ps: how to charge the pictures?