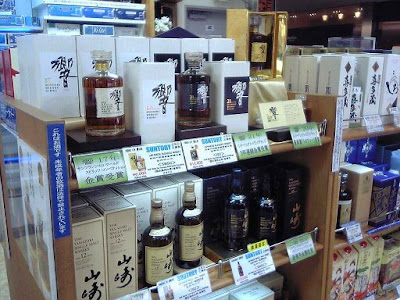 Update 1.6.2010: Katherine, who recently traveled through Narita Terminal 1, reports that the array of Japanese whiskies now available there is fairly impressive: "In March they were still carrying basically Hibiki and Yamazaki. This time around they had several Yoichis (12, 18 and even 20 year-olds), and the Taketsuru 21, which was selling for only ¥6000. I paid ¥10500 at Ebisu Kinokuniya in March. I also saw a Hakushu, although I don't remember the year." For more information on people's experiences at Narita, take a look at the comments on this post.

The duty free shops at Tokyo's Narita airport have a limited selection of single malts. Please remember that not all travelers will be able to rely on a last minute duty-free dive. Anyone transferring at a second airport in a jurisdiction that doesn't allow large bottles of liquids in hand luggage may find themselves trying to glug back 700ml of premium whisky at a security gate.

None of the smaller Japanese makers were represented and the only Nikka whisky I saw was an odd "Gold and Gold" bottle dressed up as a Samurai helmet. Incidentally, there was a lot of Scotch that is difficult to get outside Japan, including blends such as Old Parr Superior (6000 yen), at prices that were much better than the Tokyo department stores. There was also a very limited selection of shochu.

Anonymous said…
Do you have a duty free stores list at this air port? I am going there this month
thanks you can sent email
james at firebay.ca
or james at ipage.asia
December 17, 2008 at 6:10 AM

Nonjatta said…
When I went they had no Hakushu. Stupid question but have you been looking in Japan? I am surprised you cannot find it. Many department stores and bigger supermarkets routinely stock it.
April 8, 2009 at 10:20 AM

Unknown said…
ah, i'm sorry to leave out an important piece of info: i live in PA, USA.

not the best place for exotic single malt scotch. >_<

Nonjatta said…
See the bottom of this post for why you might have trouble with Hakushu in the US: http://nonjatta.blogspot.com/2009/04/hibiki-12-to-be-released-first-in.html

Suntory`s company strategy document for 2009 signaled a push for export sales for their top whiskies. They have just appointed a global brand manager.

Good idea to pick it up at Narita. If I lived in the US I would not spend a fortune on getting rare Japanese whiskies at the moment. I believe that in two years time they will be much more available in your neck of the woods.
April 14, 2009 at 9:35 AM

Nonjatta said…
Thank you very much for posting that info, Scott. These sorts of updates are really useful. Anybody who finds a new retail outlet or finds one of the ones mentioned here much changed, please please post the info!!
January 25, 2010 at 11:27 AM

Sanjay said…
I have a friend who will be in transit in Taipei. Does the duty free store at the airport carry any Japanese whiskies and if so how are the prices compared to those in the city?
September 2, 2010 at 2:36 PM

Sanjay said…
I heard that there are lot of Japanese whiskies available cheaply in Taiwan, hence was wondering if anyone would know where to buy them.
September 2, 2010 at 2:52 PM

Anonymous said…
I have just returned from recent vacation in japan in 2012 here is an update on duty free shop at narita airport (*warning long post).

In other airports of the world probably if you are departing or arrival from airport you can buy duty free but in narita airport if you are arriving there is no duty free at all. Me and my buddy were quite shocked to find this my buddy he wanted to get a carton of camels smokes but couldn't do so and my plan was to buy the hibiki 30yo for duration of my vacation then Yamazaki 25yo to bring home when I depart from japan via narita and I couldn't do so when I arrived at narita.

Before you buy any duty free liquor at narita, please ask your airline during the check-in time if you are allowed to buy duty free liquor and carry on board your plane. We were flying ANA airways and they allowed it but I hear delta airways may not allow it so please check.

if you buy NON-duty free liquor from many supermarkets in japan you will have to pack into your luggage and check it in they probably will not allow you to hand carry aboard any liquor.

For narita duty free shop, I saw a wide range japanese whiskies, the hibiki 30yo and yamazaki 25yo that I was after it was available but was way too expensive. 75,000 yen each only slightly cheaper than what I was able to get at non dfs whisky retail outlets here in my country. So it was quite a let down not able to sample either hibiki and yamazaki's.

In the end I just bought old parr superior 18yo for 6500yen that was not available in my country and it came along with a nice men's wristwatch memorabilia.

here are my videos of japanese whiskies that are available at narita duty free shop. if you like you can use a youtube downloader to get the videos and incorporate into nonjatta site.

Sanjay said…
Thanks for the videos. If I am not mistaken, the price for Nikka Taketsuru 17 shows up as 5500 yen for a 700ml bottle, is that correct. I have a friend who is flying to Japan so this video is really helpful, I am assuming the prices would still be around the same.
Do you remember any other Japanese whiskies priceed below $100.
June 12, 2012 at 5:34 AM

Nonjatta said…
Dear Sanjay
I haven`t been through there in a while, but I suspect the cheaper single malts are hovering around your price limit.
Chris
Nonjatta
June 12, 2012 at 11:07 AM

Sanjay said…
I had sent an email to the duty free store at Narita Airport, they sent me a link of the products being offered(though it's in Japanese)