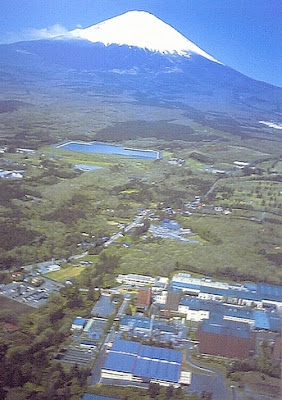 As iconic locations go, it is hard to beat a distillery hidden in forest at the foot of Mount Fuji. A note of caution though: you may not see the mountain if you visit. It is only a few miles away but the trees get in the way and, anyway, Fuji isn't one of those gals who just takes her clothes off for anyone. More often than not, she is shrouded in clouds. The photograph at the top is a publicity shot taken from the air.

At the moment, both brands are marketed as 18 year old malts (there is also a 15 year old single grain Fuji Gotemba). This can lead to confusion between the two but they are priced very differently: Fuji Sanroku 18 is 15,742 yen, while Fuji Gotemba 18 is 8,392 yen. How can the same distillery produce two such differently priced but similarly aged malts? The answer I was given on my visit was that Fuji Gotemba contains only 18 year old malt, while Sanroku also contains a 24 year old malt produced at Gotemba. (Malts are always aged by their youngest component.)
There is a non-single malt version of Fujisanroku, so make sure you look for "single malt" spelled out in Roman characters on the bottle. The non-single malt version has its alcohol content of 50 per cent displayed prominently. The label below shows Fujisanroku in Japanese characters: 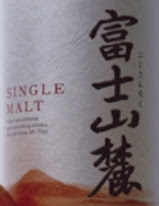 The Gotemba labels seem to be spelled out in Roman characters on the bottles I have seen but would comprise of these characters if they appeared on a label:

This is the current Fuji Gotemba single malt bottle:

In addition to the main Fuji Gotemba and Fujisanroku single malt brands, there are 500ml bottles of 10-year-old single cask Gotemba whisky being sold at the distillery and through its online shop for 4,200 yen. There are several different styles. I have not seen this stuff being marketed more generally: 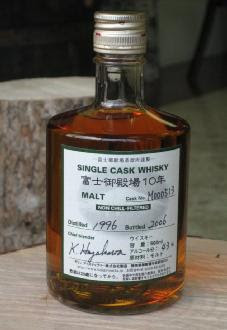 At over 2,000 feet above sea level, Fuji Gotemba's elevation means it is cooler than the great Kanto plain stretching to its east. Down in the flatlands is it is extremely hot and humid in summer but the distillery's temperatures range only a few degrees higher than the Scottish distilleries.

Fuji Gotemba's water is originally rain and melted snow from the top of Mount Fuji. It is drawn up from streams running down between the relatively porous rock of "New Fuji", formed a mere 10,000 years ago, and the non porous "Old Fuji" base layer, which spewed out of the ground about 90,000 years before that.

The distillery was opened in 1973 by the Kirin conglomerate. A huge 1.7 million square feet facility, it includes a bottling plant as well as the distillery. It is just off a busy main road heading into Gotemba city.

Fuji Gotemba is open to the public between 9am and 3.30pm but is closed every Wednesday and over the New Year period. There is a warning on the Japanese website that they sometimes close on other days and asking people to telephone before their visit. When I visited there was a woman with reasonable English working on the reception, so this may not be too arduous for non-Japanese speakers. Parties of more than 10 people need to book ahead anyway.

There is a free tour which involves walking around a set course on your own, with views through glass of the various processes. There are posters explaining what is going on in each room and some translation into English. Kirin says this walking course takes 50 minutes. It took my wife, my two year old son and I 20 minutes, and that was with a lot of running after my over excited son up and down the corridors (in general, the distillery seemed quite child friendly. No disapproving glances). If you telephone ahead of your visit, I think you can book a guided tour. There is no single malt whisky being offered as part of the tour. The single malts are there but you have to pay: 500 yen for the Fuji Gotemba, and 1000 yen for the Fujisanroku.

Drink drivingKirin have flags declaring their opposition to drink driving all over the entrance to the distillery and have a highly effective way of stopping it. The designated driver has to wear a badge saying so throughout the tour. They are given a small miniature of blended whisky/Bourbon in lieu of their tasting and can drink fruit juices and water while their passengers sample the nectar of the Gods.

LocationView location on my Google map of Japan's single malt distilleries. (If you download Google Earth and click on the "KML" button above this map you can see the topography in 3D! Scroll to the bottom of the page for more on this.)
Address: Shibanuta 970,
Gotemba-shi,
Shizuoka-ken
412-0003
Twenty minutes by taxi from JR Gotemba station.
Tel：0550-89-4909
Address in Japanese:
〒412-0003 静岡県御殿場市柴怒田970番地
The Fuji Gotemba website in Japanese
Online distillery shop in Japanese
Email Post
Labels: Distilleries Fuji Gotemba Fuji Sanroku Kirin