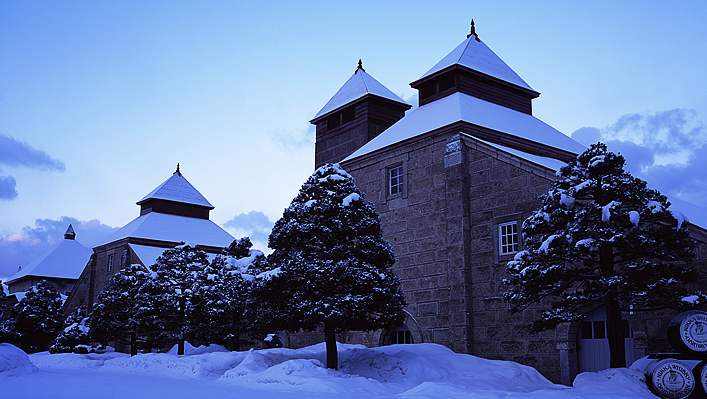 The Yoichi distillery is on Japan's Northern island of Hokkaido. It is owned by Nikka, one of the two dominant Japanese single malt whisky makers. Nikka says that it typically produces "rich, peaty and masculine" malts.

And in computer text, in case you want to search for these whiskies on the Japanese internet: 余市 (Yoichi), ウィスキー (whisky). (Can`t see it?)

The distilleryMasataka Taketsuru, one of the two founding fathers of Japanese whisky, chose Yoichi as the site of his new distillery when he left Suntory to found Nikka in 1934. They began distilling whisky in 1936 and released their first dram in 1940. Taketsuru is supposed to have chosen Yoichi because of its similarity to the distillery sites he had seen in Scotland. I have never been there but it is supposed to be beautifully located, next to the sea and surrounded by mountains. It takes its water from underground springs.

The peculiarity of Yoichi is its use of old coal-fired pot stills, a method which Taketsuru learned in Scotland but has now almost completely died out in that country.

Single malts from Yoichi
See the side bar.

The virtual life of the distillery

A web clip hosted by Nikka. And a beautiful 360 degree photo of the distillery