It is not really in the interests of Japan's big two distillers to tell you too much about it but Japanese whisky had a prehistory.

If you listen to the official versions from Nikka or Suntory, Japanese whisky started with a bang in 1919 or 1924. They have slightly different versions of the creation myth, emphasising the role of either Masataka Taketsuru or Shinjiro Torii in bringing the gospel of authentic whisky from Scotland, but basically they agree: quite suddenly, out of the blue, Japan started making proper Scotch style whisky. 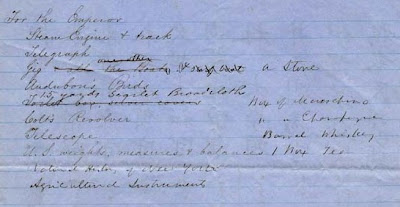 Whisky arrives in Japan? Perry`s list of gifts for the Emperor

It is not quite as simple as that. Japan had a long dalliance with whisky before Taketsuru travelled to Scotland or Torii opened the Yamazaki Distillery. I have not yet found any reference to whisky in the Edo period, when Japan had a policy of excluding foreigners, but it may well have made an appearance. Even when the country was closed, the Japanese kept close tabs on things foreign through their experts in "Dutch studies" and through Dutch traders given limited rights to trade.

What is certain is that whisky, or rather "whiskey", arrived simultaneously with Japan's opening to the West. When Commodore Matthew Perry came in his black ships to negotiate a treaty with Japan in 1854, he brought with him a barrel and 110 additional gallons of American whiskey as a gift for the Emperor and his subjects. (By all accounts, the Emperor's barrel was purloined by the Shogun's retainers and never reached the Chrysanthemum Throne.)

In the murky half century between that first introduction and the 1920s, numerous Japanese (and, perhaps, foreigners) had a go at producing whisky, in the broadest sense of a bottle with the word "whisky" on it. Indeed, some quite large companies seem to have entered the market. Olive Checkland, in her book Japanese Whisky, Scotch Blend


"Foreign liquors are known in Japan as 'yoshu'.... In general, spirit manufacturers emerged in Japan from chemists working in the chemist's shop. In 1871, the English factory at Yamashita in Yokohama was attempting its own manufacture of 'yoshu'. Later, Karakichi Takiguchi experimented making spirits at his own chemist's shop at Takekawa-cho, Itabashi-ku, Tokyo. By 1912, when the Meiji Emperor died, there were several companies manufacturing spirits. These included Kanseido, foreign drinks manufacturer of Takiguchi, Tokyo; Denbei Kamiya, a foreign drinks maker who also ran Kamiya Bar in Asakusa, Tokyo; and Nishikawa who made foreign drinks in Osaka." (p.31)


Shinjiro Torii worked as a young man with the Konishi foreign drinks maker in Osaka, owned by his uncle Gisuke Konishi. From 1888, Konishi was making and selling "whisky" as well as beer and brandy [1]. The Konishi company of today, most famous for its production of fine glues, traces its history back to those early days of Western liquor production. There is reason to believe that some of the whisky produced by these pioneers might have more in common with a firm holding glue than a proper whisky. Checkland describes Masataka Taketsuru's first job, as a chemist for the big alcohol producer Settsu, as involving producing "artificial spirits ... by judicious mixing of a wide range of alcohol, sugar, perfumes, spices and flavourings." Ew!

There was some importing of whisky but there was also quite a lot of Japanese-produced synthetic "whisky" masquerading as the real thing. The first appearance of Shinjiro Torii's legendary Torys brand came around 1919 on a bottle of "Finest Liqueur Old Scotch Whisky" ("liqueur" was sometimes used as a synonym for "blended" in those days). The label said it had been bottled by the "Torys Distillery". This was before any genuine Japanese distillery had been built.

This may, of course, may have been a genuine import suffering from a certain looseness of language but there were other clearer cases of fraud. On April 19th, 1923, the commercial supplement of the Japan Chronicle reported Scotch whisky being sold in Japan from "Leith, London".

That October, a month after the Great Kanto Earthquake had annihilated Tokyo and Yokohama with the loss of 140,000 lives, Shinjiro Torii bought land between Osaka and Kyoto to build the Yamazaki distillery. It is with Yamazaki and its first manager, Masataka Taketsuru, that the official history of Japanese whisky making begins.
Email Post
Labels: Distilleries History Nikka Suntory Taketsuru

Very interesting blog, am really glad i managed to find it was a very interesting read. I am a big fan of whisky i have even started brewing it and have been designing my own whisky labels to go on the bottles. As much as i love it though i think it is great to learn the history behind it all aswell and when i find blogs like this one which gives you a bit more information about whisky in the past it is defiantly worth while reading.
April 23, 2008 at 8:54 PM

Anonymous said…
I am trying to find evidence of the first scotch whisky imported to Japan after 1857. I suspect that the Grand Hotel established in Yokohama shortly after the opening of the port was the recipient of these first bottles of Scotch. I have asked several Japanese bartenders in Tokyo and Yokohama and the concensus seems to be that Old Parr was the first. I'd like to find evidence that this is the case. Where should I seek my info? Also, does anyone know what whiskey was in that barrel designated for the emporer?
November 6, 2008 at 5:26 PM

Anonymous said…
Interesting questions. One good way of finding this out would be to search through old newspapers (either Japanese or English Language, depending on your Japanese ability). There is a library in Yokohama which keeps the Japan Chronicle (which was a newspaper written in English and published in Kobe) back to very early dates in the Meiji period. Also, other Japanese publications. You would have to trawl through the papers and find adverts. I have worked through much of 1922/3 on a different subject and there are numerous ads from hotels/shops and restaurants saying what they have available. I do not know precisely what was in the barrel brought by Perry but somehow I have it in my head that it was not Scotch but a US whiskey. On what basis do they think Old Parr was the first? I know from my own research that there were all sorts of brands then that do not exist anymore. It may well be that the first Scotch was not a brand that would be recognisable now.
November 6, 2008 at 5:33 PM

Anonymous said…
I'm not sure why these guys think it was Old Parr. I didn't probe any deeper but I found the coincidental answers to be interesting. Thanks very much for the tips. I was trying to get away with not spending hours going through old newspapers. I am also assuming there are import records from the period as well, however, I have no clue where these are kept. I will scout around in Yokohama. This is a very enjoyable blog, thanks for the great info.
November 6, 2008 at 6:00 PM

Anonymous said…
Good luck and be sure to tell us here on Nonjatta first (or at least second if you are publishing elsewhere.) I will always publish any information of this nature and Nonjatta reaches most people who are interested in Japanese whisky. By the way, the newspapers are actually quite fun to read if you have a spare afternoon. Good luck!
November 6, 2008 at 6:07 PM

Unknown said…
Interesting blog Nonjatta.
I must ask however, is there any evidence of Japanese Whisky production prior to 1924? By this I mean not only rumours or stories but real evidence of the manufacturing of a beverage fermented and distilled from malt?
I am doing research on the topic as we speak and I am very interested in the topic.
Thank you for a great blog btw :-)
//Erik
January 13, 2011 at 2:22 AM

Nonjatta said…
No. There is no conclusive evidence of a drink distilled from fermented malt before 1923/24, when Yamazaki was built and opened. (I have seen a Yamazaki barrel marked 1923). I think we can say that there was very probably some experimental distilling from 1921-ish, when Taketsuru returned to Japan.
http://nonjatta.blogspot.com/2007/08/1919-1920-unlocking-scotlands-secretss.html
However, before that, there is conclusive proof either way.We certainly cannot definitely say that there was no whisky production before that date. As I map out in a book I am about to publish on Japanese alcohol, beer brewing was well known and established in Jａｐan early in the Meiji period, so the fermenting of malt was not a problem. There was technical publishing about alcohol making techniques in Japan, and distilling has been known for centuries. There is a very strong local tradition of spirits that is notable for its liberal use of a wide variety of ingredients (including unmalted barley). So, it is quite possible that some whisky distilling was done well before this date. Certainly, there was a pretty healthy market for imported whisky as well as things calling themselves "whisky" that had been made in Japan from well before 1923. If you look around on Nonjatta you will find quite a few pages talking about this. Personally, my guess would be that there was some limited, probably odd, fermented malt distilling well before the official start. It just seems unlikely that these enterprising guys would have been selling "whisky" and not at least trying to make it in the way that it was well known it was made. They didn't show any such tardiness in beer and wine.
January 13, 2011 at 1:19 PM

Nonjatta said…
I should add that what I mean by "there is no conclusive evidence" is that I don't know of any. THere may very well be such conclusive evidence that I have not yet come across in the Japanese literature.
January 13, 2011 at 1:21 PM

Unknown said…
Thank you for that elaborate answer :-) Looking forward learning more on the topic from your site!!
All the best,
Erik
January 14, 2011 at 9:42 PM

Dave Waddell said…
Coming to this late. My understanding - from memory - re. the Old Parr was that it was a case requisitioned by Japanese delegates sent by the Emperor to Great Britain a few years after Perry's gift. No one knows what the original gift was - bourbon or scotch - and no one really knows, I don't think, whether Perry's sweetener actually made it to the Emperor himself. The layers of intrigue between port and court, together with that which dominated the different Shogunate and Emperor factions, were such that its likely to have ended up in the lap of somebody else. This is conjecture, of course.
September 2, 2015 at 8:55 PM

Unknown said…
I have a bottle with lid. On lid it says Product of Japan Established 1899. No markings on bottle except the bottom. It says as follows, Suntory Ltd. 4 YT. Liquer Bottle. 1 - 1111. Japan. Has this got any value. In perfect condition.Would appreciate any info. Thank you Lesleigh
December 20, 2015 at 9:17 AM