In September 1918, as the senseless slaughter of World War I played out its last act in Europe, the people of the remote northern Japanese town of Hakodate must have been a little taken aback to see two large US transport ships sail into their port unannounced. 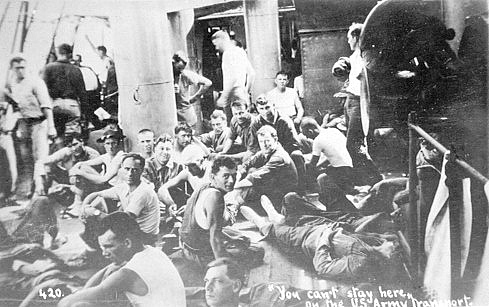 Siberian expedition soldiers on a troop ship
The boats were full of American soldiers destined to spend the next two years in Siberian wastelands fighting Bolsheviks, long after the kit bags in Europe had been packed up. It was one of the more obscure, unsuccessful and just plain odd adventures in American military history, but it does not concern us here. We are interested only in what happened that night in Hakodate.

The town had nothing to fear from the unexpected arrival of the doughboys - Japan and the US were on the same side at the time - so the bar owners must have been rubbing their hands when the US commanders decided to allow their 3,700 seasick men to go for a stroll while the ships took on coal. One enterprising bar enlisted a foreigner with a sense of humour to try to pull in the troops. A sign in English was erected outside:


"Notice!! Having lately been refitted and preparations have been made to supply those who give us a look-up, with Worst of Liquors and Food at a reasonable price, and served by the Ugliest Female Savants that can be Procured. This establishment cannot boast of a proprietor, but is carried on by a Japanese lady whose ugliness would stand out even in a crowd. The Cook, when his face is washed, is considered the best looking of the company."

The place was soon packed, as were all the other bars and brothels in the town. Major Samuel I. Johnson, with the American Expeditionary Force in Hakodate, told his fellow officers what happened next:


"All the cheap bars have Scotch whiskey made in Japan ... If you come across any, don't touch it. It's called Queen George, and it's more bitched up than its name. It must be eighty-six per cent corrosive sublimate proof, because 3,500 enlisted men were stinko fifteen minutes after they got ashore. I never saw so many get so drunk so fast."

Captain Kenneth Roberts was part of a team sent out to round up the paralytic soldiery:


"Intoxicated soldiers seemed to have the flowing qualities of water, able to seep through doorways, down chimneys, up through floors. When we slowly edged a score of Khaki-clad tosspots from a dive and started them toward the ships, then turned to see if we had overlooked anyone, the room would unbelievably be filled with unsteady doughboys, sprung from God knows where, drunkenly negotiating for the change of American money or the purchase of juss one more boll of Queen George."

The ships hurriedly left Hakodate without the coal they had come for. At the next port, Otaru, only a few troops were allowed off. Queen George had her say there too: an American soldier smashed a bottle over the head of a Japanese policeman.

And so began the GI's long and loving relationship with Japanese whisky. It was not the first time Americans, whisky and the Japanese had been mixed. When Commodore Matthew Perry came in his black ships to negotiate a treaty with Japan in 1854, he brought with him a barrel and 110 additional gallons of American whiskey as a present. By all accounts, quite a time was had by all. But it was the first time the Japanese had served up their own version and, as you can see, it was a bit of hit.

Incidentally, one slightly serious point can be got from the tale: this all happened in 1918, five years before Suntory built the first proper Japanese distillery at Yamazaki, but the American soldiers definitely thought Queen George, or whatever they were drinking, was whisky in a Scotch style rather than anything more American.

Anyway, as I say, it was by no means the last time US soldiers drank Japanese whisky in large quantities. World War II memoirs are full of captured Japanese whisky keeping the GIs warm at night. They seem to have developed a taste for it because, as soon as the Japanese whisky companies lost their vital Japanese military patronage, they found a new military Sugar Daddy in the shape of the occupying Americans. My trip down this little byroad in Japanese whisky's story was prompted by Serge Valentin, who has this interesting bottle in his collection (visit his website, it's great): 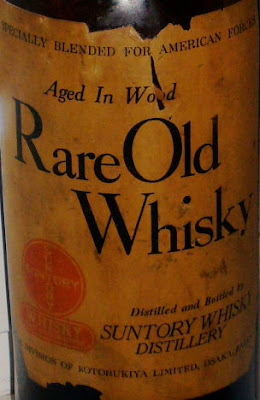 I think it was bottled by Suntory, or Kotobukiya as they were calling themselves then, at some time between 1945 and 1963. (For those who want some of the nerdy detail on why I think that, I have put it here ... and here is an update). It is tangible evidence of the American occupation's part in the Japanese whisky story.

Immediately after 1945, most Japanese people were desperately poor. Things were so bad that a lawyer, who famously tried to live honestly on the standard Japanese rations without resorting to the blackmarkets, died of starvation. There was plenty of drinking going on, but the average Japanese was certainly not drinking quality whisky. A famous drink was the "bakudan" ("bomb"), a mixture of methyl alcohol and disguising liquids. In 1946, the Government recorded 384 "bakudan" deaths. A slightly less deadly moonshine called "Kasutori" was so widely consumed that it gave its name to the whole intoxicated subculture of post-defeat decadence. One blackmarket trader of the time said:


"I drank trying to forget a life that hung suspended like a floating weed."

Whisky was part of a different culture, that of the American occupiers and the favoured Japanese elite who did business with them. The accounts of the US diplomats, administrators and soldiers who ran Japan as a kind of colony between 1945 and 1952 are full of empty bottles of Japanese whisky. The Japanese whisky makers were definitely not complaining. The arrival of the foreigners brought unprecedented profits. In 1940, before Pearl Harbour, Nikka whisky had made 66,662 yen profit before tax. In 1950, it made 278,106 yen. Five years later, it was making 17 million yen. We have to be a bit careful with those figures because there was very high inflation in the first years of the occupation, but the point is that the Japanese whisky companies were still making money. They had managed to change horses from the old elite to the new.

Then came the Korean war. American military procurement accounted for more than a quarter of Japanese exports during the conflict and the Japanese economy never looked back. During the 50s and 60s, normal Japanese people were increasingly able to buy proper whisky and they did so in their millions. It is impossible to say why whisky became the iconic drink of the Japanese boom years. Was its glamour something to do with those over sexed, over paid American soldiers everybody had seen knocking back whiskies in the years of Japan's humiliation? We can't know.

As Serge's bottle shows, however, there was more direct continuing patronage by the Americans for Japan's whisky industry. In the Vietnam War, the local bars and brothels where the GIs drank away their nightmares were often stocked with Japanese whiskies (see, for instance, "Two Score and Ten", History of the 3rd Marine Division, p. 211; or "British GI in Vietnam" by Ian Kemp, p. 178). I contacted the US forces in Japan while writing this post to see if they still sell the stuff in their bars but I haven't had a reply yet. I hope they do because it wasn't just existentialist French philosophers and Imperial Japanese Naval officers who helped build this industry. The humble GI has been doing his bit too ever since that first, "bitched up" encounter in Hakodate. 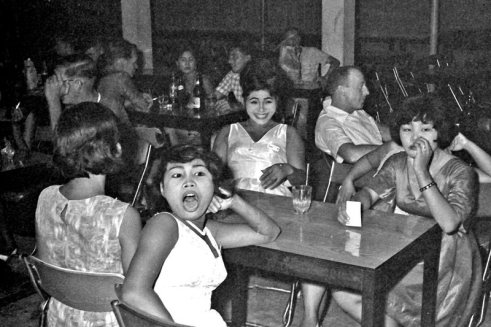 GI bar during the Vietnam war by Fes Cannady


The Hakodate story is from "Russian Sideshow: America's Undeclared War" , 1918-20 (2003, Brassey's) by Robert L. Willett. pp. 168-69.
The troop transport photograph is from the "America`s secret war" website. I have sought permission to use the photo. The photograph of the GI bar is by Fes Cannady and he has given permission to use the image while retaining all rights.
The account of Kasutori culture is from "Embracing Defeat - Japan in the Aftermath of World War II" (Penguin Books, 2000) by John Dower. pp. 108 and 145. Great book.
I used Olive Checkland's "Japanese Whisky, Scotch Blend" as a source for the financial figures.
Email Post
Labels: History Nikka Suntory