A visit to the new distillery at Chichibu 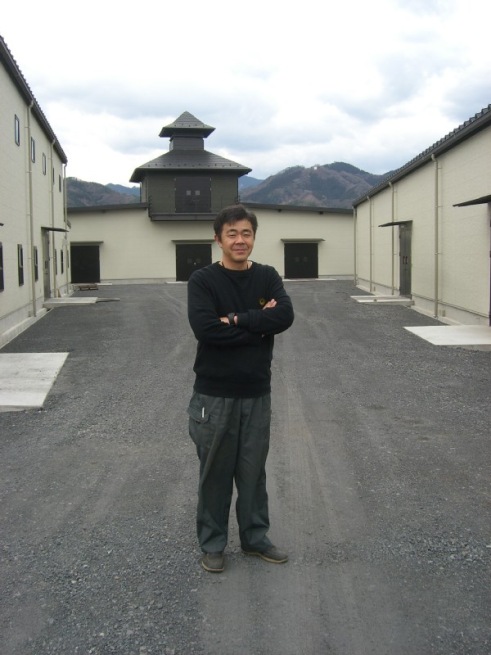 Update: The ground breaking ceremony at Chichibu
Update: I think I have located the distillery on the Japanese single malt distillery map.

The hottest story in Japanese whisky right now is the the new Chichibu distillery, a really heart warming tale of the son of a centuries old alcohol making family being brought to ruin in his attempts to make top quality whisky and then picking himself up and building a brand new distillery at Chichibu.

Well, John Hawkins has gone and got the scoop. John is a good friend of Nonjatta`s, having previously shared his Tokyo whisky bar [1,2] knowledge with us. He now lives in the UK but a recent visit to his old Japanese haunts brought a real coup: a visit to Chichibu, a meeting with Ichiro Akuto himself, and some wonderful photographs of the new distillery [full gallery here]. He has been kind enough to write up an account for Nonjatta:

"I had been fortunate enough to meet Ichiro Akuto on several occasions previously. Akuto-san is a friend of Watanabe-san, the owner of Quercus - my favourite whisky bar in Tokyo. So I had met him in Quercus a couple of times, in addition to his appearance at Whisky Live Tokyo in 2006. I was a big fan of the Ichiro's Malt series - the fine whiskies from the old Chichibu distillery (also known as Hanyu and Golden Horse), and so was naturally very excited to hear about Akuto-san's project to build a new distillery in Chichibu.

Ahead of my most recent visit to Japan I had heard the good news that the new distillery was now complete, and Akuto-san had been granted a license to start distilling. Better still, Watanabe-san had managed to arrange for us to be among the first people to visit the new distillery, shortly after it began production.

Chichibu is about an hour and a half by train from central Tokyo, and then from Chichibu station there was a 15 minute taxi ride to get to the distillery itself. As the taxi came over the brow of a hill, the distinctive pagoda roof of the new distillery came into sight, nestled amongst the mountains of Saitama. The sense of excitement in the taxi was palpable.

We were greeted by Akuto-san at the entrance to the distillery, and in that delightful Japanese way we took off our shoes and put on slippers before entering the building.

The tour started in the milling room, where Akuto-san showed us the two types of malt he is currently using. One of these is imported from Germany, the other from England. The mill itself was also imported from the UK. His intention is to eventually source barley locally from Saitama prefecture and he is currently discussing this with local farmers.

He has also discovered that he can source peat within Saitama and so eventually he will be malting and peating his own barley, using raw materials entirely from the local area. I couldn't help but admire Akuto-san's commitment to an area of Japan which some might consider a bit of a backwater. It isn't particularly famous for anything, although I'd like to think in the future Saitama will be synonymous with fine whisky.

After leaving the milling room we moved on to the main hall of the distillery building, where the majority of the rest of the whisky making process is carried out. We started here with the mash tun and, as far as I could tell, the production of the wort adhered largely to the standard process. Akuto-san mentioned that he had recently found a local farmer to take away the draff to use as animal feed (although thankfully he avoided making the now somewhat weary "happy cows" gag). He later told us that some of the distillery apparatus had been purchased from a local brewery. I think the mash tun may have come from there. 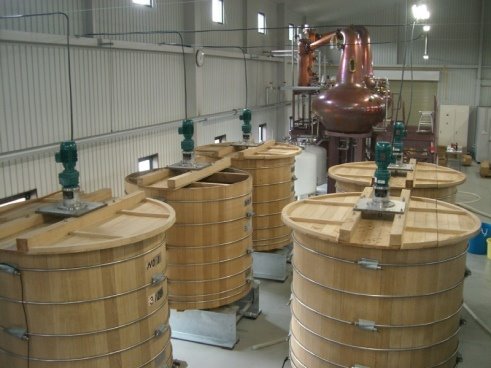 Next up were the wash backs - there were five of these and they had a distinctly Japanese look to them - to my eyes similar to those used in sake brewing. They were made of a Japanese oak, mizunara (Quercus crispula). Akuto-san said that as the wood was still very new. They were having to use higher than normal quantities of yeast initially to counteract the tannin.

From there we proceded to the piece de la resistance: the stills. There is just one wash still and one spirit still, both fairly squat and similar in appearance to each other. Both were manufactured by Forsyth's and imported from Scotland. Akuto-san has been particularly meticulous here, travelling to Scotland on at least three separate occasions to discuss their design and construction. To my eyes they were quite similar to the stills at Kilchoman - the same sort of size and shape - although I'm sure a distiller would shake his head at that. 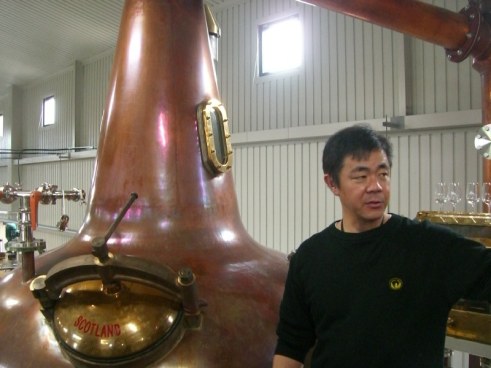 Ichiro Akuto and the wash still

Distillation at Chichibu only started within the last few weeks. Even though our visit was on a Saturday, we were fortunate enough to see the distillery in full swing. We could actually see the new make in the spirit safe. We'll have to wait and see how it tastes.

We moved on to the warehouse. This was also a glimpse of things to come. At the time of our visit, there were only a few dozen barrels in there and none had yet been filled. Akuto-san expects to start filling barrels in April. All of the spirit produced until then will be stored temporarily in vats. The foundations of a fourth building, a visitors center, are being laid.

It will be several years before we can really know what the finished product tastes like, but everything about the distillery and the great man behind it gives me a very good feeling. We may be witnessing a classic in the making. I believe Akuto-san is already taking orders for advance purchases of casks. I am extremely tempted." 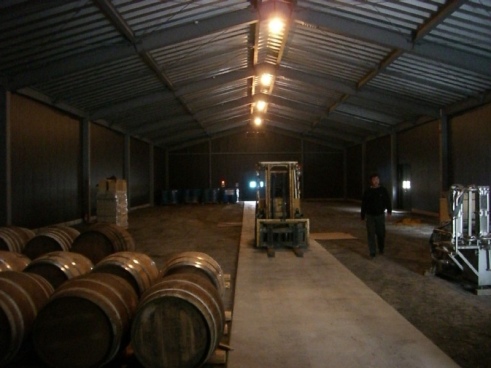 The warehouse (above and below) 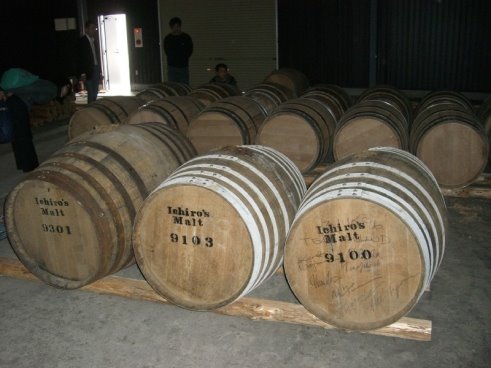 John also has another post about this visit on his own, excellent blog.

I am not sure, but after a lot of searching, think I have pinned down the address of the distillery:
49 Midori ga oka, Chichibu Shi, Saitama, Japan
埼玉県秩父市みどりが丘49
0494-62-4601
Email Post
Labels: Distilleries Ichiro`s Malt Venture Whisky

Anonymous said…
Amazing! I agree that this may mark the first glimpse of the birth of a new whisky force. If the market's trajectory continues (and the whisky's are as fine as expected), Ichiro will be filling a insatiable demand for hand-crafted small batch malts. Yeah!
April 8, 2008 at 12:38 AM

Anonymous said…
Yesterday evening we had a fantastic time with Akuto san, five different Hanyu's and the Chichibu newmake (of which I now have a signed bottle on my shelf).
190 swedes from Vaxjo were grateful to Akuto san for saving the famous Hanyu casks and for the presentation he made. Keep up the good work!
November 12, 2008 at 4:33 PM