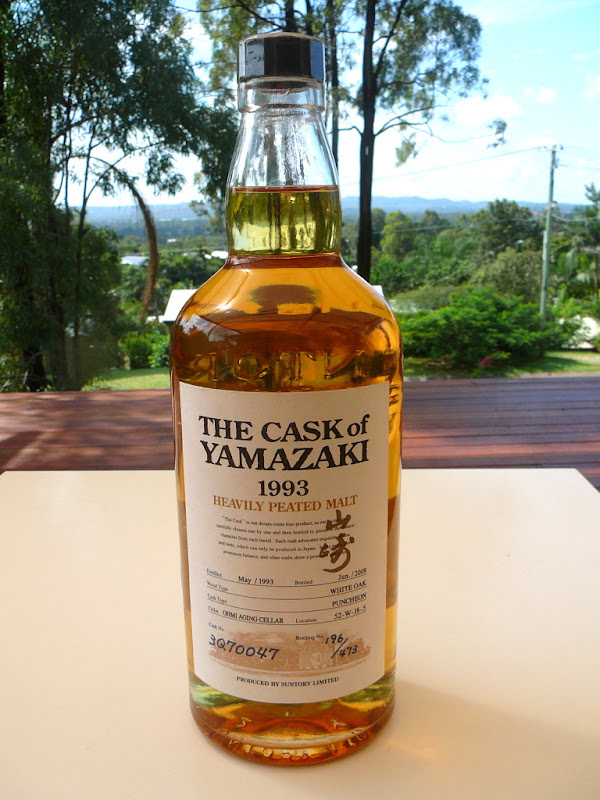 Visit Serge`s website, the definitive Whiskyfun.com.
"The Cask of Yamazaki 1993/2008 (62%, OB, puncheon #3Q70048, 492 bottles) This is a brand new peated version (26ppm) and the puncheon was a 2nd fill one (American oak).
Colour: Pale gold.
Nose: Similar in some respects to the Osaka Kita NBA bottling reviewed below but more phenolic, resinous, smoky (pinewood) and herbal (patchouli, hashish). Quite spectacular, even at 62% ABV. With water: a tad less resinous but also a tad peatier. Greens, shoe polish, mushrooms (do you know blue foot or wood blewit? They smell exactly like this malt.) Big stuff. Mouth (neat): almost the same whisky as its sister cask, only fruitier and more flavourful. Unusual notes of lychee liqueur and rose jelly. With water: again, close to the NBA’s cask but with an extra-dimension, brought by these very fruity notes (lychees and such) that I never found in any Scotch – I mean, to this extent. Spectacular whisky. Finish: long, on a very unusual lychee/peat combo.
Comments: Had you told me a whisky would taste like peated lychees, I’d have told you to stop drinking. It’s like a mixture of 80% Ardbeg and 20% fine Gewurztraminer. I love this, mind you.
SGP:555 – 91 points." (Serge`s scoring system is explained on this page.)
Email Post
Labels: Suntory Yamazaki

Nose: lots of peat straight away, even when opening the bottle I could smell it immediately. Some licorice, wet moss and a little bit of salt. With a little water is all much more nuanced. Somewhat sweeter and maritiemer too. Delicious!

Taste: again a lot of peat. It really lives up to it's name "Heavily Peated". It is remarkable that when consumed pure at 62% it remains perfectly drinkable. The balance is just perfect. With water you can taste so much more. Less pronounced peat. There is a flavour that I notice and that I had never tasted before. Some calls it lychees, but I don't know. My son really likes lychees so I recognize the taste and smell. It is fruity, though. And delicious! It is an oily whiskey (even with water) that lays a film on your palate.

Finish: peat, pepper (except for addition of water). Again some liquorice. With water everything remains much longer.

Comment: If you didn't know that it's a Japanese whisky, you'd never guess. Really. The tears of the whiskey run down in very thin lines. IF they get down all. They seem to stick for an eternity to your glass.

Finish: Sweet and woody with cookie dough, plenty of peat smoke. More of the berries from above, a hint of dark chocolate, the comes apple peels and brazil nuts.

Comment: Like a peated fruit and berry pie with a dab of custard. I want to carefully crack the glencairn to pieces and lick the insides of the shards.
May 8, 2011 at 7:57 AM