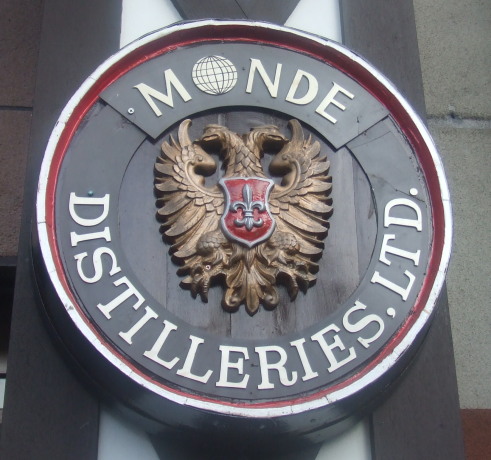 There are rumours flying around that there will be an official single malt bottling issued by Monde Shuzou in Yamanashi prefecture by the end of the year. I have no idea if those whispers have any basis in fact and will try to firm them up with Monde when I can. In the meantime, an independent bottler called Tokuoka Ltd. has bought a supply from Monde and stolen a march on the story. Tokuoka's product is called "Usuikyou" and is a single malt. 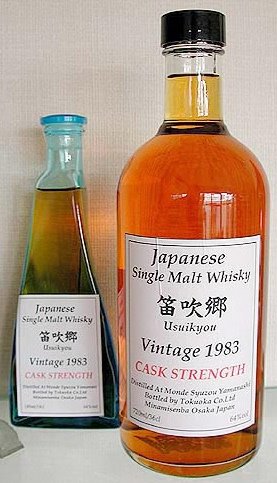 Usuikyou's name literally refers to flute playing but is derived from the characters used in writing Fuefuki, the city from which it comes. The whisky was distilled in 1983 but appears to have been cask matured for only 20 years. It is cask strength at 64 per cent alcohol. Katotomo has tasted it and, though he did not exactly rave about it, was not wholly dismissive either. He described the nose as oily, rubbery, burned corn with a touch of ammonia. The taste combined sweetness and sourness. There was a lot of grain on the palate with grilled soya beans. 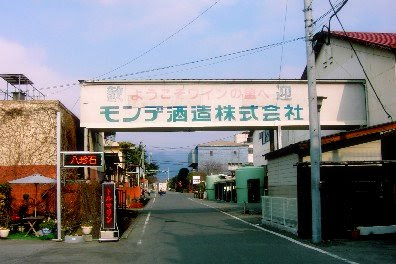 So, we have a newcomer to add to our list of single malt distilleries! Monde Shuzou, established in 1952, is a reasonably well established wine maker. Yamanashi is one of the main Japanese wine making areas and Monde (pronounced Mon-duh in Japanese) can pump out 20,000 bottles of the stuff a day. It has a workforce of 44 people.

Like many Japanese wine makers, it has a long history of dabbling in other foreign alcohols. It has been selling very small amounts of its two brands of blended whisky for a while: "Royal Crystal" and "Fuji no Sei". I have never tasted them 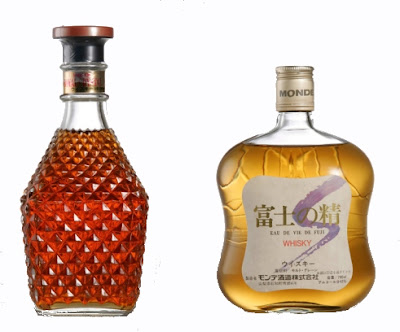 These are not mainstream whiskies and belong to an interesting category of the Japanese industry that I have been meaning to post about for some time: "Ji-whisky".

The "Ji" in "Ji-whisky" means local and is roughly equivalent to the concepts of "micro-brewing" or "micro-distilling". There are very healthy "Ji-biru"(beer) and "Ji-zake" (sake) sectors in Japan, with lots of bars specialising in selling their often delicious products. The "Ji-whisky" sector is still very much in a formative stage. In fact, although I have heard this term bandied around recently, I had to think carefully before adopting it myself because it gives the misleading impression of a movement of new and high quality distillers. Hopefully, that will come to pass but at present there is a tremendous variety in the quality of the spirits being sold and no clear focus from many of these small distillers on producing the small batch single malts that would start to get them a toe-hold in the market.

Ichiro Akuto's Venture Whisky, which opened the new Chichibu distillery this year, might be defined as a "Ji-whisky" operation but they are so far ahead of the bunch that they should perhaps get their own category until the rest catch up. Other small batch whisky sellers/producers are Sapporo Shusei (Hokkaido), Sasanokawa Shuzou (Fukushima), Kanemasu Shuzou (Niigata), Gyokusendou Shuzou (Gifu), Aioi Unibio (Aichi), Wakatsuru Shuzou (Toyama), Chugoku Shuzuo (Hiroshima) and Herios Shuzou (Okinawa). Eigashima Shuzou in Hyogo prefecture is a slightly larger operation than the rest, selling the well established blended whisky brand "White Oak". Not all of these companies are necessarily currently distilling. Some may be selling old casks from previous whisky experiments, and the general feeling I had until I saw this Monde single malt is that they just didn't get it: that they were just trying to hawk a few cheap bottles of whisky in their winery shops and were doomed to obscurity. I must say it is rather typical of the sector that this innovative Monde single malt should have come from an independent bottler. If, however, the rumours of an official Monde single malt bottling are correct and that turns out to be a high quality product then perhaps the idea of "Ji-whisky" isn't just a pipe-dream after all? This may be the start of something significant.


I am usually religious about asking permission from everyone whose images or content I use/refer to on Nonjatta. On this occasion, however, I had a computer crash just as I was about to do this. I lost a browser full of open pages of blogs with the images used in this post and have no way of matching the photos I had already downloaded, short of starting the picture research from scratch. They were all, I think, either publicity photos or amateur blogs so I am just going to publish and be damned and, on this occasion make do with sending out a general thank you to the Japanese blogosphere. Never again though. The only exception is the photo of the new whisky itself which comes from Katotomo, who also tipped me off about the whole Monde whisky story. As usual, a big thank you to Katotomo.
Email Post
Labels: Monde Usuikyou

Anonymous said…
I think the "ji-" in jizake, etc, is less like "micro-" and more like an French-style designation of terroir. It's not a perfect translation, but I think it's better than "micro" because microbreweries rarely have such a strong association with the place they are made.

Anonymous said…
Yes, I think I am coming at this with the ji-biru (Japanese microbrewery beer sector) comparison slightly more in mind, rather than the ji-zake one. In beer, the term is best translated as "micro" and it links in with a world movement in small scale beer production. I think that is the only sense in which this terminology might be applicable to whisky.

As I tried to make clear in the original post, I am not 100 per cent convinced that we really can talk about a "ji-whisky" sector as yet. In both the beer and sake worlds, the "ji" sector comes with strong ethics of very high quality production from individual high quality producers. In whisky, this small scale sector's commitment to quality is unproven. Indeed, you could look in another direction and see these producers as a continuation of the old "Yoshu" tradition. In some cases, the companies concerned do have an uninterrupted lineage back to those bad old whiskies (http://nonjatta.blogspot.com/2007/05/history-1854-1919-jurassic-period.html). There is only one company that I can definitely say is part of an incipient top quality ji-whisky sector and that is Venture Whisky at Chichibu. Nevertheless, the term is starting to be bandied around and I decided to report it to readers here.

But, anyway, back to the terminological issue you raised. Terroir is a complex and contested topic in whisky circles (see http://www.thescotchblog.com/2006/05/terroirists.html) but, in a very general sense, all single malt whisky is "ji-whisky" in its emphasis on the locality from which it comes. Suntory and Nikka have, until now, been far bigger promoters of the idea of terroir in connection with their distilleries than these small boys. So, to take the jizake concept's emphasis on locality and high quality and apply it to whisky would not be very useful, as it is already the dominant meme in the mainstream and, in Japan at least, still struggling to gain acceptance among the small producers. Maybe you could see the use of this "ji-whisky" term as more a statement of hope than of existing fact.

A very important aspect of the "jizake" movement has been the promoting of relatively small local producers (although really widely distributed products like "Hakkaisan" are, I think, also jizake) and it is this aspect of the meaning of the term that has given it wings. It has allowed it to be transplanted into the world of beer, where "ji-biru" really is much better translated as "microbrewery beer" than as "terroir beer", whatever that would mean. In whisky, the same is true. "Terroir whisky" would mean nothing. "Micro-distillery whisky" carries some meaning.
August 18, 2008 at 10:21 AM