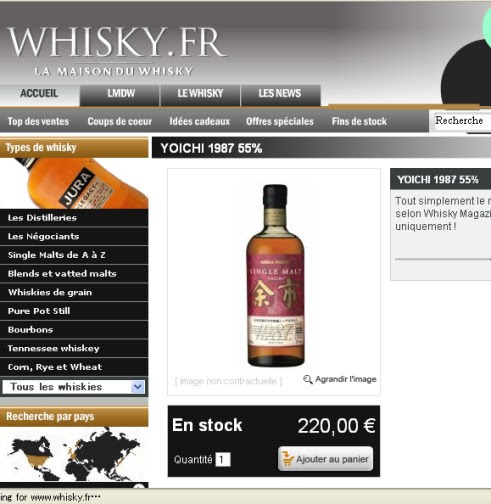 Any European eager to taste the Yoichi 1987 which won the best single malt award at the World Whisky Awards this year, should get over to the Maison du Whisky`s website pretty sharpish.

Alexandre Vingtier of Maison du Whisky, the European distributors for Nikka, says: "Only 150 bottles of Yoichi 1987 55% 20yo have arrived from Japan for Europe, simply the best single malt of the world according to Whisky Magazine. I personally regard it as one of the best dram I have ever had... I tried it a few month ago in Japan and I just poured myself one more dram of it in order to celebrate this award!"

"The new Master Blender of Nikka is extremely talented [Ed.: This is Tetsuji Hisamitsu, the chief Yoichi blender who we understand has either got or is getting the Master Blender title]. It has a special vibrance for him, as he designed it for his daughter's 20th birthday, when Japanese get adults and drink and smoke with their parents for the first time," says Alexandre.

You can order it online here. There is a restriction of one bottle per customer and it will set you back 220 Euros which, though it looks high, seems a remarkably reasonable price given the likely demand for this one. The whisky available through Maison du Whisky consists of 24 bottles from the original bottling and 150 bottles of a second bottling which was done by Nikka after winning of the World Whisky Award. The label on the second bottling records the prize. Nikka has done these second bottlings of popular limited edition whiskies in the past and the fact that whisky from the same batch is left unbottled for a few months does not effect the taste of the whisky by all accounts.