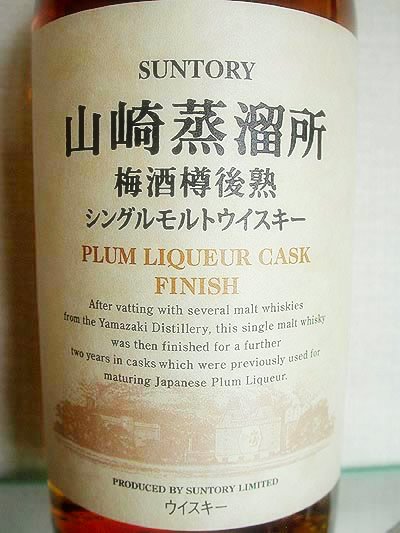 I often get asked whether there is a Japanese style of whisky making and usually respond by playing down any idea that it really can be considered as something separate from the Scottish tradition. The Japanese distillers have spent far too much effort trying to make excellent Scottish whisky to really be regarded as a distinct style, in the manner of US or Irish whiskey. That said, the Japanese distillers do have access to a very different alcohol heritage and that is going to occasionally produce things that are unique. This is one of those products.

The new Yamazaki Plum Liqueur Cask Finish (tug of the forelock to Katotomo's website for alerting me to this) is a fascinating hybrid: a combination of whiskies stored in white oak, mizunara, and Spanish oak casks for more than 12 years, then finished in an umeshu barrel for 2 years. We have discussed umeshu on Nonjatta before. It is a staple of Japan's long humid summers, a delicious traditional plum liqueur based on shochu spirit (or, more rarely, whisky) combining sweetness with the tartness of green Japanese plums.

Hiroyoshi Miyamoto, general manager of the Yamazaki distillery, let slip at Whisky Live Tokyo in February that Suntory had a few innovative projects in the pipeline. I didn't think too much about it at the time but this certainly fits snugly into that category. Suntory have not gone in for much cask finishing in the past and nobody that I am aware of has ever tried an umeshu finish. According to Katotomo, there are some whiskies being stored in umeshu barrels at Hakushu but this is a Yamazaki single malt. Can we expect a Hakushu version in the near future?

It is not going to be easy getting hold of this whisky. There are only 3,000 bottles and I have not yet found it on general sale.

But what does it taste like? Katotomo says it tasted more like umeshu than he had expected, which is not terribly helpful, I know, to those of you who have never tasted umeshu. Imagine a slightly tart plum liqueur. Katotomo liked the combination of sweetness and sourness in the whisky. A real "Love it or hate it" dram, he said. He also detected chocolate, banana and some smoke. It is only 40 per cent alcohol, but has a solid whisky kick. But what really struck Katotomo was the transformation when water was added: the sourness really came to the fore. In a mizuwari, it just tasted like umeshu. Got to taste this stuff.


Thanks to Katotomo for the photograph as well as the tip-off for the piece.
Email Post