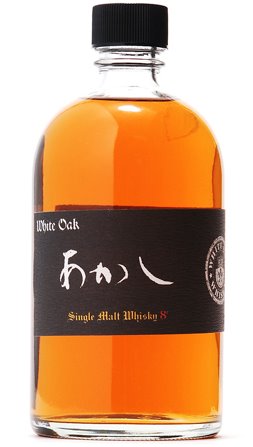 Changes are coming thick and fast to the Japanese whisky world. Last month, Nonjatta stuck another pin in the Japanese single malt distillery map with the announcement of an unofficial bottling (and rumours of an official one) from Monde distillery in Yamanashi prefecture. However, an official bottling from the White Oak Whisky Distillery in Hyogo-ken had slipped under our radar. They now have a single malt called "Akashi" on the market.

"Akashi", which takes its name from its hometown, is aged 8 years and 4,500 bottles have been released. It is 40 per cent ABV and costs 2,620 yen for 500ml (note that, not 700/720ml). This means that one of the longest established names in Japanese whisky has now joined the premium single malt tussle. I have ordered myself a bottle, so I will post my impressions as soon as possible.
Email Post
Labels: Eigashima White Oak

Anonymous said…
Hi Chris,
One may wonder why they're using so many plastic twist caps in Japan (vs metal or cork). Maybe a question to ask one of their good people one day?
September 12, 2008 at 4:44 PM

Anonymous said…
I will ask that question. Do you think it makes a difference to the taste.
September 12, 2008 at 4:47 PM

Anonymous said…
Well, there are dozens of different kinds of plastics but I'm sure they used inert ones. I'd say plastic is maybe less 'sexy' but maybe it's got better 'mechanical and chemical' properties. On the other hand, we've seen plastic caps on Scotch (like on Douglas Laing's little 20cl advance samples) that were terrible (huge evaporation, can't be kept).
Again, I'm sure the Japanese do it right, but I was wondering why they used plastic.
Santé
September 12, 2008 at 8:17 PM

Anonymous said…
Interesting. I think it may be dangerous to generalise about the Japanese companies. Some of them, absolutely certainly, will have got it right and researched it thoroughly. Others may not have.
September 12, 2008 at 9:38 PM

Unknown said…
I got hold of a bottle "Akashi 8yo" and it was much taste of green apples, although it feels quite young. Look forward to try to get hold of the 12 year old. I hope and believe that the extra years of maturing makes it wonderful!
March 28, 2009 at 1:38 AM