What does Japanese Oak do to whisky? 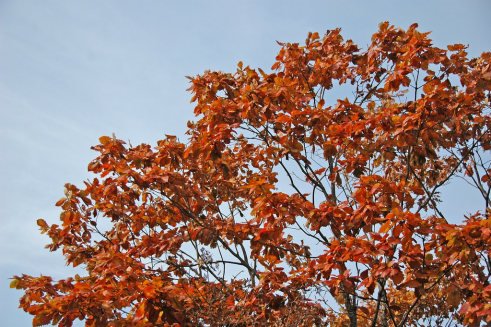 I am always being asked whether Japanese whisky has any defining characteristics that set it apart from its very close relative, Scotch whisky. I am usually sceptical of efforts to draw stark distinctions because the Japanese distillers are so loyal to the Scotch whisky making tradition that they have been imbibing since 1923. There have been some recent developments that suggest greater freedom in the future and there are some drinking customs, such as the Japanese habit of eating while drinking and mixing whisky in mizuwaris and oyuwaris, that undoubtedly influence some sectors of the Japanese whisky market. Overall, though, Japanese whisky is firmly within the Scottish tradition and it is not possible to reliably distinguish Scottish and Japanese drams by taste.

However, one major difference that is already well established is the widespread use of Mizunara (Japanese Oak) barrels for maturing whisky by many of the major Japanese distillers. This is by no means a universal practice but it is an additional option not presently available to the Scottish.

Do Mizunara barrels give a distintive flavour to their whisky? Most people agree they do. This special taste/aroma has been variously described as evoking "sandalwood", a type of oriental incence called "kara" etc.. However, more recently, scientific research has focused on a distinctive coconut aroma associated with Mizunara barrels. A paper delivered by Yushi Noguchi at the Worldwide Distilled Spirits Conference 2008 in September tried to pin down this characteristic and makes fascinating reading.

The researchers, supported by Suntory, The International Centre for Brewing and Distilling and the Scotch Whisky Research Institute, asked a panel of testers to score how much coconut smell they detected in two types of whisky: one matured in Mizunara and the other matured in White Oak barrels. 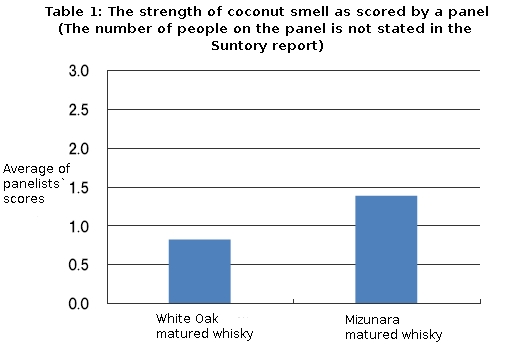 As you can see, the Mizunara matured whisky appears to have had a much more definite coconut aroma.

But why? Whisky lactone (3-methyl-4-octanolide) has long been known to have definite coconut aromas. It is found in all types of oak. The researchers then tested three types of whisky for lactone content. 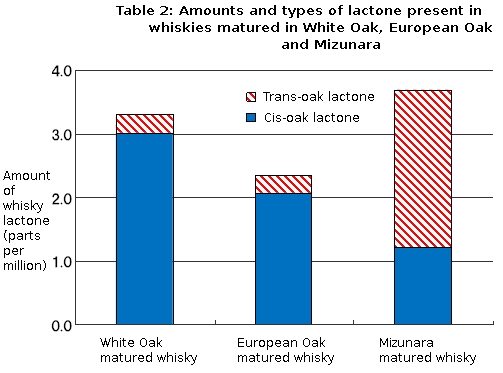 The researchers therefore went back to their panel of testers with one more experiment. They 1ppm cis-oak lactone in 20 per cent ethanol solution and compared it with a similarly prepared trans-oak lactone. They also did the same comparison in whisky rather than the ethanol solution. The conclusion was that, though the trans-oak lactones do have a weaker smell, their smell works better with the whisky's own aromas/tastes and this creates the impression of a stronger coconut presence.

The graphs and report are from Suntory Information Release No. 10235. The graphs are the property of the researchers and their supporting institutions. My translations into English are provided for readers' information and are not sanctioned by the researchers. The photograph of the mizunara tree was taken by autan and is subject to this Creative Commons license. The original tip-off about the Suntory report of the research came from Katotomo`s brilliant website .
Email Post
Labels: Mizunara

Anonymous said…
Hi Chris,
Thanks for this very interesting information. I agree, it is difficult to tell a Japanese whisky from a Scottish one, but have heard and long wondered about the effects of Japanese oak. Since it is oak, why can't the Scots use it?
Davin
November 19, 2008 at 10:48 AM

Anonymous said…
I don`t think there is anything to stop the Scots using it theoretically. However, it is Japanese oak and therefore much more plentifully available in these parts than in Europe. More a practical issue at this point, I would have thought. But I am guessing. I may post later today about an interesting development re. the availability of these quirky Querqus in Europe
November 19, 2008 at 11:46 AM

johnimac said…
I am mainly a fan of Islay malts, however, I have tried and thoroughly enjoyed Japenese single malts. They are beefy whiskies and well worth inclusion in a gallery with Laoghroig, Lagavullin and other west coast whiskies. I am unable to comment reference a comparison with Speyside whiskies as I haven't tasted Japanese malts with such light flavours. From a Scotsman to Japanese distillers - keep up the good work; the more choice the better.
August 16, 2009 at 6:14 AM

Unknown said…
Why not combine the various species of wood used to cure oak together to create a new blend of whiskey? To create the taste the curing barrels would be layered much like bending rail is layered with the same species of wood. A special type of glue or paste would need to be created to hold barrel layers together as they expanded. With each amount of different species of oak used the taste will vary accordingly.
February 19, 2016 at 4:36 AM

Unknown said…
Thank you for this short and comprehensive read on Mizunara! Looking at Table 2 I would expect the trans-oak lactones to have a stronger coconut presence than cis-oak lactones. You continue by stating that cis-oak lactones have a stronger smell, but in the last section you write the opposite: cis-oak has a weaker smell. This doesn't fit with your conclusion, am I interpreting this incorrectly or should the word cis-oak in the last sentence actually be trans-oak?
June 27, 2016 at 8:34 PM

Unknown said…
Glenmorangie has launched one. Bill Lumsden is the most progressive of the Scotts.. Glenmorangie Milsean, and there is Bowmore Mizunara cask too.. less expensive, just.... a 1000$, less than half the price of the Glenmorangie!
December 11, 2016 at 8:31 AM

Nonjatta said…
Patrick and Sietse, I think you are right. Apologies for the typo. Chris
January 3, 2017 at 4:05 PM