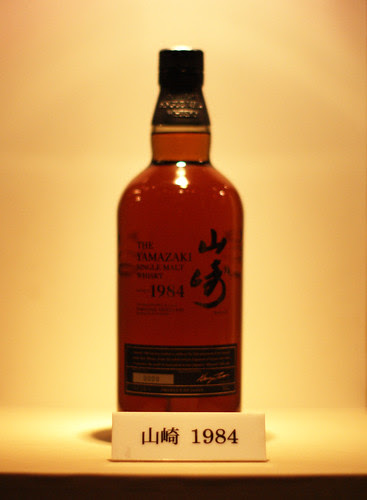 Update: John Hansell also has a review of this up. He liked it too.

I am ashamed to say that I have been slow with my coverage of the Yamazaki 1984. Shame is not too strong a word because I am convinced this whisky is destined to win some very big plaudits indeed. My only excuse is that I am in the final stages of writing my book about Japanese alcohol and I think my publisher would have a fit if he knew I was spending my time updating Nonjatta rather than sending my drafts to him. (Looking at the front page just now it is far too dominated by Suntory. I promise to put that right when I get more time.)

Enough of the excuses. Here are my impressions:

Nose: The key word here is balance. Vanilla. The tiniest smidgen of orange, but not too estery; sweet spices and the faintest idea of earth. It is quite apparent that this is mizunara aged but it is not out of balance, which sometimes happens with mizunara whiskies. A very well behaved boy indeed. Mouth: Most well behaved young lads turn out either crazy or boring but the 1984 grows into one of those annoyingly capable and balanced 25-year-olds whom the rest of us can`t help admiring. It is not polite. It is big and there is all sorts of complexity but it is orchestrated brilliantly: butter, nuts, slight hints of pine (but nothing too aggressive). The base line is all satisfying cereal and vanilla. There is a waxiness under there too. You could not call it sweet but there is enough sweetness to balance out the astringent, bitter notes that are present but never allowed to overwhelm the whole. The finish is long sweet gravy. Phenomenal.

The 1984 is important for two reasons: 1. the quality is excellent and the whisky is quite unique. In my opinion, it represents a high point in the art of making mizunara influenced whisky (keep on reading if you don't understand what I am talking about). 2. It is being distributed in significant amounts abroad: 300 bottles in the US, 200 in Europe, 2000 in Japan (even those numbers are ground breaking: 300 bottles in the US! Until Americans have been the poor cousins in the Japanese whisky world). I learn from John Hansell that the 1984 is hitting the US market from October 1 and it was his post that spurred me to write up 1984 despite the book deadlines.

Now for the bad news. To say 1984 is not cheap at 100,000 yen is a bit of an understatement (That is from the Japan marketing and I make that about 1,000 dollars but I know the US marketing is quoting 550-600 dollars). I won't be buying a bottle. All of the whisky in the Yamazaki was distilled in 1984. It has a significant amount of mizunara aged whisky in it. If you do not understand what I am talking about there: read this post about mizunara. Suntory started using mizunara in the war years, when they had no access to the white oak casks they had been using. It is difficult to use: leaky and can impart overbearing tastes and smells. But it also adds something quite different to the whisky palette and Suntory are developing their use of it into a fine art. By sending this 1984 into the US and Europe, Suntory are showing that they are deadly serious about their new strategy of developing an export market for their best whiskies.
Email Post
Labels: Suntory Yamazaki

Nonjatta said…
Please don't take my impressions too seriously!!! Take a look at John Hansell's comments and wait until Serge gives his opinion. I don't consider myself much more than a writer researching alcohol. I am good at the facts but people like John and Serge are to be trusted on tasting notes.
August 15, 2009 at 12:04 PM

Logan Young said…
Yamazaki 1984 the name itself is very unique and could raise the level of curiosity in any ones mind.What is it or what does it mean.After going the article i am well convinced that this is one of the most sought after brand of whiskey today.Its unique ingredients and high price has raised its value like anything.I have not tasted it but i feel this whiskey along with some
Cohiba Cigars will make a perfect delicious starter.
September 9, 2009 at 4:59 PM