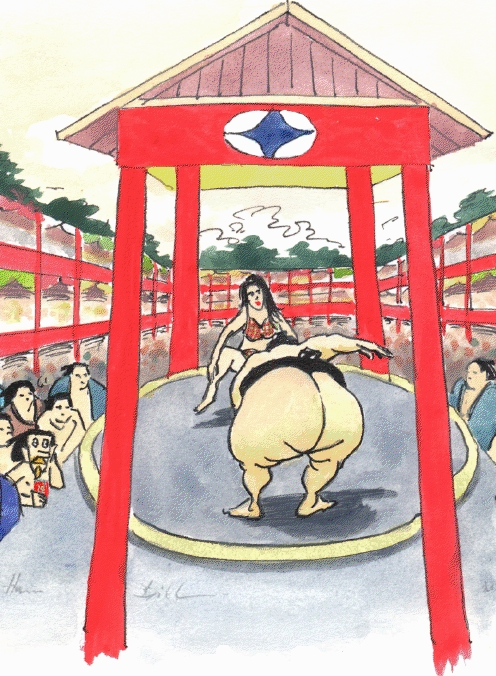 The first is called "Big Butt" and is a Hanyu 1988 vintage (Cask no. 9306, alcohol 54 per cent), just like the "Nice Butt" bottling that preceded it. There are 200 bottles available at 140 Euros each. I have asked Jeroen Koetsier of Full Proof for a few more pointers on exactly what style of whisky it is but so far all he has divulged is that he prefers it to the company's previous "Nice Butt" bottling.

The new 1988's label switches to the other side of the dohyo from the "nice butt's" enticing image of a lady rikishi's rear (see the foot of the post). This time we get to see the baggy behind of a fully matured, male sumo rikishi. Nice! 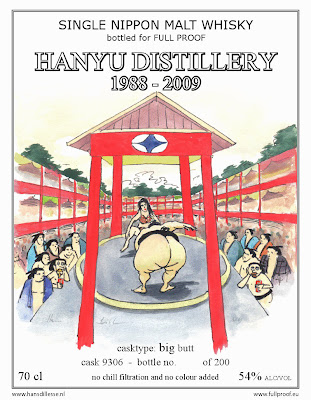 Incidentally, I am not sure the boys at Full Proof know this but the fascination with the idea of female sumo wrestling has a long history in Japan. There is an old 13th Century story about a wrestler called Uchinaga from North of Kyoto who was on his way to the capital for a tournament when he saw a beautiful young lady carrying a water pail on her head. He reached out to touch her but she trapped his hand under her arm and continued walking, dragging him all the way to her hut. The powerful woman, called Takashima no Oiko, thought him rather feeble but trained him to be a successful rikishi. At the end of the 1600s, a nun was said to have repeatedly defeated the best wrestlers of the age and, from the 18th Century, there are proper historical records of professional female sumo bouts. Matches between blind men and women were particularly eagerly attended. "Blind search for a dark spot! Mutual groping and search," said one salacious flyer for a blind-female fight. The attraction of these bouts to the audience is clear in the names of the female rikishi : "Chichigahari" (Big Boobs), "Anagafuchi" (Deep Crevice), "Tamanokoshi" (Holder of the Balls) etc.. Even after female wrestling was banned by the authorities in 1873, it continued to be a feature of the provincial circuit and made occasional, furtively attended forays into the big cities. There is a record of a male/female bout in Tokyo in 1926. 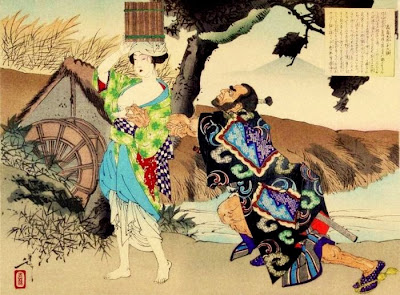 The Story of Takashima Oiko (1889) by Tsukioka Yoshitoshi

Anyway, back to the whisky. Full Proof's second bottling is a 1990 Hanyu (cask 9305, alcohol 53 per cent), priced at 130 Euros a bottle. Two hundred bottles available at Full Proof's website. 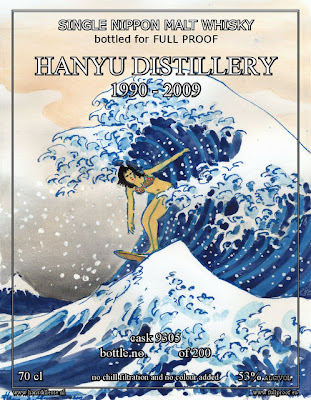 Jeroen Koetsier said: "The vintage 1990 I like even better [than the Big Butt], less ‘in your face’ and more subtle with notes of old balsamico and well aged calvados. The label is based on a famous Japanese woodblock print called "The Great Wave off Kanagawa" by Hokusai."