Nowadays, the story of Japanese whisky is basically all about two large companies, Nikka and Suntory, and a few tiny independents. The histories of Nikka and Suntory, prominently featuring their two great founding fathers Masataka Taketsuru and Shinjiro Torii, dominate the industry's narrative to such an extent that I think a lot of people go away with the idea that these are the only narratives.

That is not true.

If you spend any time exploring Japanese whisky, you start to notice the bones sticking out of the ground. Even during the war, it was not just Suntory and Nikka making whisky for the troops, but also Takara Jozo and Tokyo Shuzo. Immediately after the war, the Takara, Toyo and Tokyo distilling companies were all making malt whisky and there were plenty of other companies dabbling in the market. Unfortunately, a lot of these other traditions have now died off. I have talked a little about Takara elsewhere, and I have notes on the others waiting for a spare moment to be written up, but there is one skeleton that is larger than the others: Ocean whisky.

It is fun (for a bloke, at least) digging around Ocean because, in its heyday, when Ocean was one of the big three Japanese whisky companies, it had a distinctive obsession with the ladies: 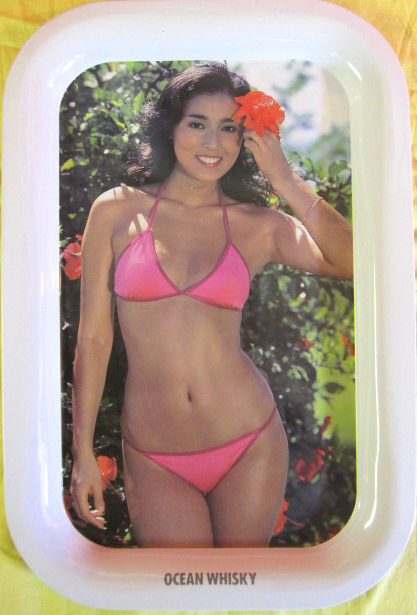 [Etc., etc., etc., and I think this was one of their brands too: etc. ... .While I am at it, I might as well link to one of my favourites from the "Carry on up the Japanese whisky" scene. As far as I know, it has nothing to do with Ocean, but I think you will agree that "Busty - the whiskey bottle cover" is an essential accessory for any discerning whisky connoisseur.]

Back to Ocean. This lineage in Japanese whisky is complex. It will take several posts to unpick all the strands. In this first piece, I am just going to map out the ground and some of the names that are associated with the Ocean tradition:

Nowadays, a large slice of the Ocean tradition is owned by Kirin. The Karuizawa distillery is a former Ocean distillery. Another (now defunct) whisky distillery that has cropped up on the Japanese whisky market over the last year is the Kawasaki distillery. Ichiro's Malts bottled some grain whisky from Kawasaki over the past year.

The Karuizawa distillery came under Kirin's umbrella through a take over of Mercian, so that brand too is part of the Ocean story. Then, going back into history, anything that bears the names Ocean whisky, Sanraku, Sanraku Ocean, Showa Brewery, Sunluck, Nisshin, Daikoku Budoshu, M.K mark Sweet Home Whisky, and (way way back in the mists of time) Kaitakushi Budou Jozoujo are all tied up in the story.

The tale of the Ocean tradition takes in desperate attempts to make fuel for Zero fighter planes in alcohol stills, some long forgotten malt and grain whisky distilleries, some nice whisky, and some spectacularly foul stuff (and that is a judgment from one of the people who made it). It is going to take several posts to get through all that.
Posted at 10:11 AM

Email ThisBlogThis!Share to TwitterShare to FacebookShare to Pinterest
Labels: Ocean

It seems to be a thing of those times. Lamb's Rum did something similar in the early 80s and my local brew, Tennants, used to have girls on the can in those days too.

I remember the Tennants.

I think the link you wanted to include was the following: