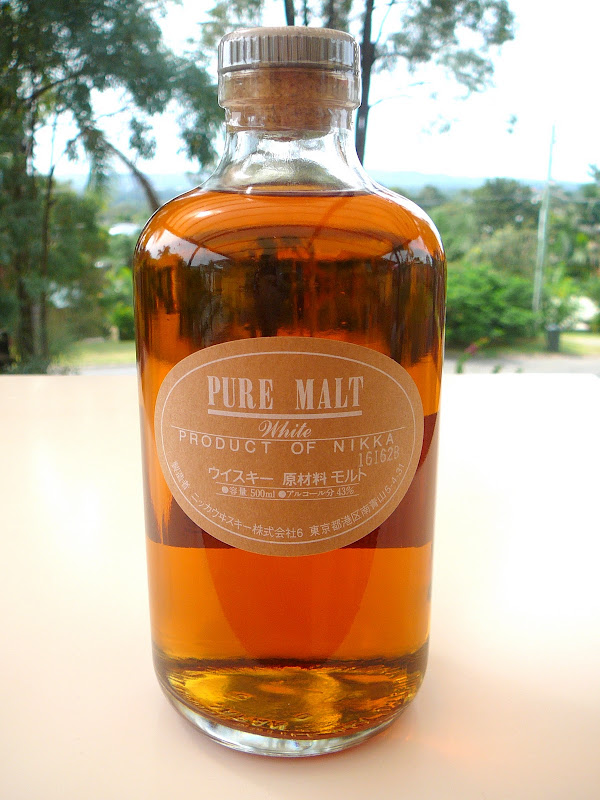 Review by Nonjatta contributor - Dramtastic
Pure Malt White, Product of Nikka, 43 per cent alcohol.
This whisky is a vatting of Yoichi malt and an Islay whisky.
Nose: There is a good whiff of peat as well as walnuts, wet moss, leather, sea spray, pepper, wood stain (after breathing for a while) and nectarines. After some time, there is a hint of lemon.
Palate: Nicely oily (nut oil). The peat comes through big time. Also charcoal, pepper and a slight bitterness. The second sip adds walnuts, creamy macadamia and a kind of minted toffee to the picture.
Finish: Medium length with earthy/vegetal peat dominating; macadamia, spice and mint. Slightly drying.
General comment: This is ever so moreish and a real bargain. One for lovers of peaty whisky.

The mystery, of course, is which Islay distillery the Scottish portion came from? I am assuming it is just one distillery. A post on syakkindaimaou.usukeba.com had a shot in the dark at the question a couple of years ago: Caol Ila. Two distilleries were ruled out because they were either owned by Suntory or involved in partnerships with Suntory (Bowmore and Laphroaig) and others were eliminated because they were not known for the style of peaty whisky evident in this vatting. To be honest, I am not sure the logic quite takes us all the way to Caol Ila's door but it is an interesting guess anyway.
Email Post
Labels: Nikka Pure Malt White

TOM said…
Got myself a bottle after reading the excellent review.

I am only a neophyte whisky enthusiast and can still count the whiskies I have tried on both hands. This Pure Malt White had a very pleasant and rich smell reminding me of Laphroaig scotch. However, the first and subsequent sips dominantly tasted like rose soap to me and I did not like that. How can this be; is this normal? Could this be because I drank it straight?

I likely won't buy this one again and even refrain from the black and red versions. On the other hand, I really like and will stick to Nikka's All Malt and of course the incredible "From the Barrel"!
September 22, 2010 at 7:43 AM

TOM said…
Thanks for the German tasting notes whiskyundspirituosen...

blumen...yes definitely; this must be why I got this rose-scented soap impression.

Funny thing is, now that I am almost to the bottom of my bottle, this rose taste no longer seems to bother me!

Jason JY said…
Tom: I have a whisky drinking friend who gets laundry detergent on the palate with everything put out by Caol Ila. It appears not everyone is as susceptible to this as I rarely encounter it (and my friend is unique among his whisky drinking buddies). I wonder if your experience suggests that the Islay portion of the vatting actually is Caol Ila.

Looking forward to getting my hands on a bottle very soon.