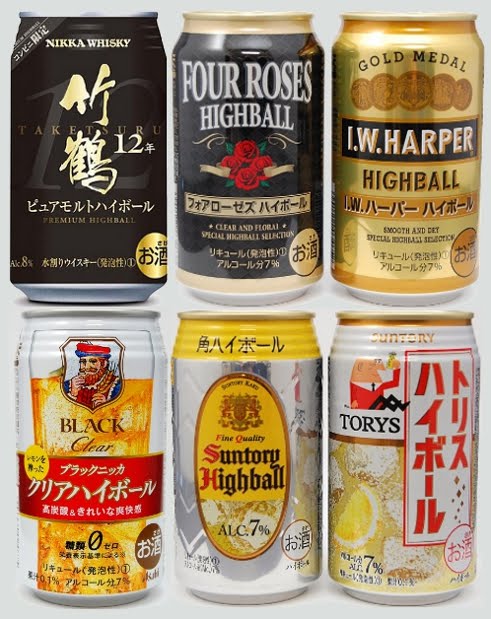 While the mere idea of whisky in a can can still provoke outrage and bemusement in Scotland and other whisky markets, these whisky highball cans are now absolutely mainstream in Japan, with several brands available in most shops.

It is easy for people outside the country to get the wrong idea about the place of these drinks in the Japanese alcohol market. Essentially, they have their roots in the "chuhai" canned drinks sector, rather than Japan's whisky culture. "Chuhai" was originally a contraction of "shochu highball", the term given to the soda and shōchū cocktails that became popular in Tōkyō’s drinking districts immediately after the war. But, today, it normally refers to cheap cocktails sold in a can. I could blather on endlessly about the whys are wherefores of chuhais but, basically, it is best summed up with a graphic, stolen from Kirin's annual report: 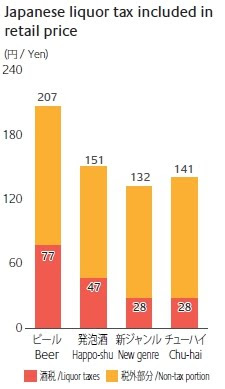 Basically, Chuhai competes with beer and beer substitutes ("Happo-shu" and "New genre") and Japan's barmy tax regime means that chuhai is far cheaper than beer. The story of the last 15 or so years in Japanese alcohol has been the relentless rise of these low-taxed alternatives to beer (and subsequent squabbles among them for preeminence). The new canned whisky highball phenomenon has dovetailed perfectly onto the end of this narrative, adding a bit of class and glamour (on the back of Suntory's very successful highball campaign) to the low-tax booze ticket.

Not all of these canned whisky highballs are particularly cheap and that too is part of the ungoing narrative of alcohol in Japan. The big drinks companies, having driven down the cut-price road about as far as they could go and finding that they were just cannibalizing sales of products with higher margins, are desperate to increase the profits on their drinks. The classy image of whisky offers that opportunity. The furthest the concept has been pushed so far is Nikka Whisky's Pure Malt Taketsuru 12-year-old Highball (part of this range), which costs about 300 yen, substantially more than a can of the much higher taxed beer. (The Torys highball is far cheaper than any beer, at about 160 yen for 350 ml, but it too is drawing on a very well established and much-loved brand)

So, in summary, these things are less of a product of Japan's whisky culture than an outgrowth of the probably universal desire for a cheap way to get blasted (but are developing beyond those roots). Their existence will, nevertheless, have a great bearing on the future of Japanese whisky, not least because they are sustaining Japan's large whisky distilling sector. International competition winning single malts were never going to be able to do that on their own.

I must admit it seems a little strange (desperate?) to be canning 12-year-old Nikka pure malt but perhaps I am a fuddy-duddy. I do sometimes have a guilty sip.
Email Post
Labels: Highball

Unknown said…
Enjoying the site. As I currently live in Japan, thought I'd add my thoughts.

Yes, these are just whisky and soda water as far as I can tell. The abv ends up around 7% in most cases.

While I definitely prefer a single malt straight, I find these canned highballs to be appropriate(ly tasty and convenient) for many situations. I was glad to see the new line come and stay on the market so long.

One point I think worth noting is that these are for the most part convenience store niche products. In the past when deciding what drink to grab from the convenience store during a night out, I'd usually prefer a beer, and only grab the standard Suntory highball if I had a strong itch for whisky taste. Now I almost always get the Four Roses one, I think it works really well in this format. I even prefer it over the Taketsuru 12 one. This coming, however, from someone who would rather drink Four Roses in a highball before straight or on rocks.