No. 1 Drinks acquires all of Karuizawa stock 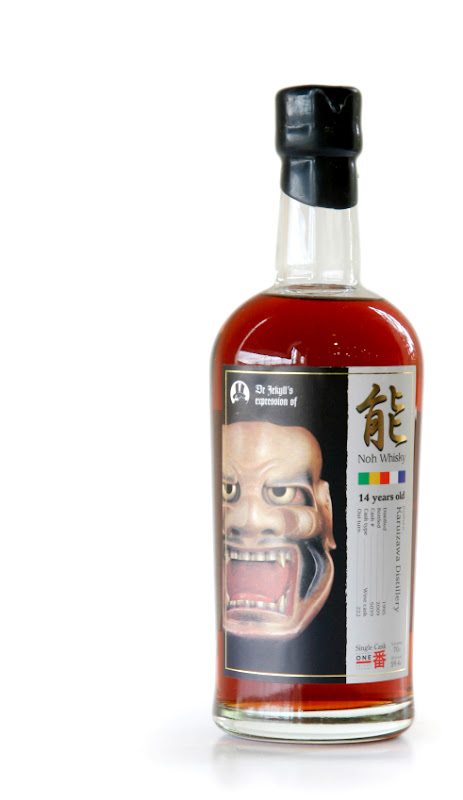 One of No. 1's Karuizawa "Noh" bottlings
Update 26.8.2011: This does not contradict the original piece but, just for the sake of clarity, Marcin Miller at No. 1 says: "The intention is to bottle as many casks as possible at the (Karuizawa) distillery, but we will also be transferring some stock to Chichibu."
All of the remaining inventory of the Karuizawa distillery has been bought by an Asian firm working on behalf of Number One Drinks.
A statement released by No. 1 on Aug. 11 said the casks would be moved to a warehouse at Ichiro Akuto's distillery at Chichibu.
Basically, this news appears to sound the death-knell of the Karuizawa distillery (1), which stopped distilling in 2001 and, apart from a few distilling runs for maintenance purposes, has not been active since. Kirin took over the distillery’s owner Mercian in 2007 and is clearly not interested in keeping one of the most charismatic and historically significant Japanese distilleries as a going concern. No company that had any serious interest in keeping a distillery going would sell its entire inventory. Instead, Kirin is concentrating on its mass-market operation at Fuji Gotemba.
Thank goodness the stock has ended up in the right hands! No. 1 has played a major role in raising the profile of Japanese single malts globally and some of its recent Karuizawa bottlings have been quite outstanding.

A statement released by No. 1 said: "Of the 12 Gold Medals awarded by the Malt Maniacs in 2010, four were for whiskies sourced by Number One Drinks (including three Karuizawas) and the Best Japanese Whisky in Jim Murray’s Whisky Bible 2011 was a 1967 single cask from Karuizawa."
Marcin Miller, managing director in Europe of Number One Drinks, said: “As well as the release of Chichibu ‘The First’ and the on-going bottling of the Vintage Series single casks from Karuizawa, we are looking to release an 11-year-old single malt at 46 percent from Karuizawa. These are exciting times for fans of Japanese single malt whisky.”
The firm's Tokyo-based managing director David Croll said: “The sherry-matured, rich and complex single malt of Karuizawa was an undiscovered jewel. We have taken great pleasure in introducing the whisky to enthusiasts throughout the world. This acquisition will give greater flexibility in terms of what we release when and the possibility of launching a private cask scheme.”
A statement from No. 1 stressed the importance of the company's relationship with Chichibu distillery in handling the Karuizawa whisky: "As well as bottling the iconic Vintage Series at Karuizawa Distillery, the acquisition will see Number One Drinks working more closely with Ichiro Akuto as casks will be moved to a new warehouse at Chichibu Distillery. Number One Drinks is planning a global launch of the eagerly-awaited Chichibu three year old in September of this year, with attendance at Whisky Live Taipei, Whisky Live Paris, the Stockholm Beer & Whisky Festival and London’s Whisky Show (The Whisky Exchange). "
Email Post
Labels: Karuizawa

Philip said…
This label is quite awesome, but actually not what comes to one's mind when thinking about whisky :)
August 12, 2011 at 2:38 AM

Jameson said…
I'm new to this world of whiskey...I just tried a little bit, can't say smth more then it's not bad, for example, Karuizawa Noh 1995 is a quite good one with the notes of cocoa and caramel...but I still mostly prefer Scotch whisky
August 17, 2011 at 8:32 AM

Karuizawa said…
Any information on how much whisky the remaining stack is?
September 27, 2011 at 6:30 PM

Nonjatta said…
I asked that question to Marcin but he said there was a contractual restriction saying he could only say it was a substantial amount.
September 28, 2011 at 12:03 AM