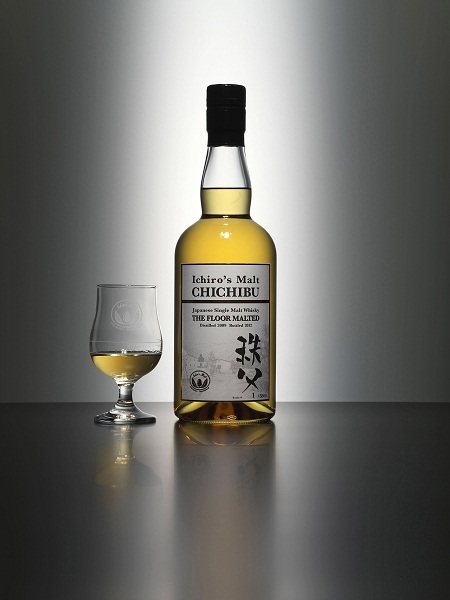 New "The Floor Malted" bottling from Ichiro Akuto at Chichibu.

In 2008, when Chichibu was just getting started, Akuto went over to Britain and personally did his own floor malting at a British maltster. There is a photo of him doing it on this Japanese site. This bottling is made entirely from that malt and has been aged for three years in Chichibu's traditional dunnage warehouse. It is 50.5 percent alcohol and there are a fair number of bottles (8,800) but I have learned from Nonjatta readers more experienced in these matters than I that that does not necessarily mean it will be easy to get hold of. It is expected to hit the shelves on about March 26 for about 9,000 yen (100 dollars). Chichibu is describing it as being soft on the palate with sweet and bitter chocolate notes and citrus fruit, orange peel, ginger and herbs in the nose.

The reason why this bottling is more than just a gimmick is that it is concrete evidence of the acquisition of skills by Chichibu that will be necessary to deliver on Akuto's stated aim of developing Chichibu's own malting operation. As it stands, almost all Japanese whisky is made from barley grown and malted abroad. This is not particularly unusual. There has long been an international trade in malted barley and, even at the time Masataka Taketsuru visited Scotland in 1919, much Scottish whisky was actually made from barley malted in England. But it would definitely be an tremendously exciting step if Japanese whisky made from Japanese barley malted in Japan were to make an appearance.

Update 23.3.2012: The Whisky Wall also has a post up about this which describes the casks used in more detail.

Alan Messini said…
Hi Chris
I couldn't wait to get my hands on some of this, so naturally it was held up in customs over Easter!
I received it today & tried it immediately!
My impression: on the nose: "grassy" young malt & notes of toffee & honey
Palate: considering its youth & 50.5% alcohol, very smooth & well integrated.
Sweet with toffee, honey & fresh young malt & hints of chocolate finishing with oak spice & a little "saltiness".
Complex & moreish - very enjoyable.
A very clean, well made whisky - I look forward to trying a longer matured version in the future.
More power to Ichiro - this very young whisky shows he is on the right track
Regards
Alan
April 17, 2012 at 7:38 PM