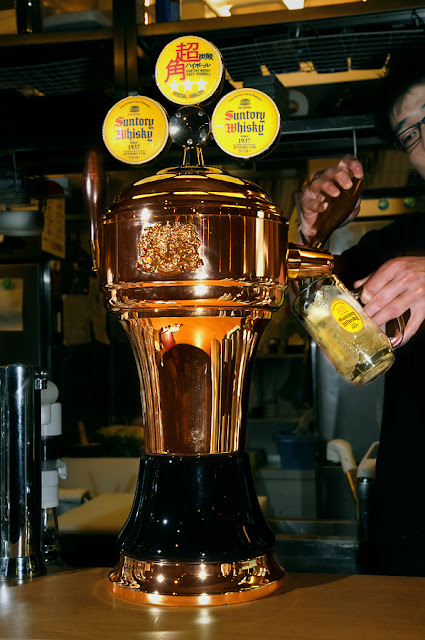 Suntory, Japan`s biggest whisky distiller, offered a fascinating insight into the revival of the country`s whisky market in a recent press release.

Suntory`s innovative marketing was largely responsible for the highball boom that has pulled the Japanese whisky market out of more than a quarter of a century of decline, and the press release offers statistics that help understand what has happened.

I know that only a few Nonjatta readers are going to be as geekily interested as I am in the mass market for whisky in Japan, but I would say this on its critical relevance to the higher end Japanese drams that other readers may be more interested in: quality Japanese whisky exists because of the mass market and will not thrive in the long run without a healthy popular demand in Japan. The current highball revival is probably partly responsible for the reopening of the Shinshu distillery and the generally positive vibe about the whole industry right now.
Anyway, the Suntory document gives some stats to back up some guesses I have previously made about the highball phenomenon. 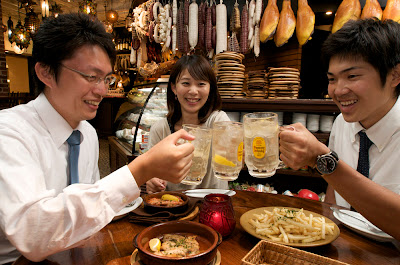 Whisky consumption started to recover in 2009 and is estimated to increase to about 98,000 kl in 2012, a 2 percent improvement over 2011. That is largely because of the popularity of highballs following an incredibly successful marketing campaign selling them as a fashionable drink for younger people. As you can see below, the highball market has been expanding very quickly indeed. The left axis represents tens of thousands of cases sold per year since 2009.

We already sort of knew about that general picture. I have reported similar stats in my Malt Whisky Yearbook articles over the last couple of years. What is of more interest here is a consumer opinion survey conducted by Suntory and included in the press release which gives some insights into the actual nature of the fad.

First, it seems that while highballs have indeed proved a hit with the young, they are actually fairly well established across the age range. The graph below is based on a sample of 4,600 drinkers who said they had had a highball in the past three months.

About half of drinkers said they were drinking more highballs this year than last year (see below). About 38 percent said their consumption had not changed.

But the question that has nagged away at me since highballs started shaking up the market here is: What drink is the whisky highball replacing?

Is it replacing other ways of drinking whisky or spirits or is it challenging other drinks with a different place in the average Japanese person`s night out?

My suspicion has always been that it has not actually been competing with single malt supping or other ways of enjoying whisky, but has instead been challenging beer as a light, refreshing drink served at the start of an evening. The Suntory survey appears to give some support to that interpretation, but it also complicates the picture.

Asked what tipple they drank less since taking up highballs, highball drinkers named beer and "chu-hai" canned cocktails. The first graph represents people drinking outside the home, while the second represents homebodies. The chu-hai category was the biggest victim among outside drinkers, with beer in second place. That ordering was reversed among people drinking in the home.

The next graph looks at what drinkers liked about various drinks. A lot of the characteristics mentioned in connection with highballs seemed to describe a light, refreshing drink akin to the insipid lagers traditionally knocked back at the start of a evening out in Japan to refresh and clean the palate (for more on this whole phenomenon, see my discussion of "toriaezu beer" in this post).

The dark bars in the graph below represent the percent of people associating a given characteristic with highballs. The light bars give the characteristics for chu-hais and other liqueurs and the middle shade gives the associations for beer. The characteristics listed from right to left are: fizzyness. refreshingness, easy to drink-ness, cheapness, and accessibility.

Sorry, these graphs are coming thick and fast, but the next one is also interesting and, to some extent clashes with my simplistic idea of highballs as a substitute for light lager. Drinkers were asked where they drank (from top to bottom in the graph below) highballs, beers and chu-hais. The darker shade represents the first drinking place, while the lighter shade represents the second and third stops on a night out.

As you can see, highballs do appear to be mainly drunk at the start of an evening (67.6 percent) but there is significantly more continued drinking throughout the evening than in the case of beer (98 percent downed at the first drinking place).

Another way of looking at the same figures is to see them as an indication of whether a type of booze is associated with food in Japan. Generally, the first stop on a Japanese night out will involve drinking with food, while later stops become more liquid. On that reading, highballs are a drink associated with food consumption (a very excellentthing as far as the whisky companies are concerned because Japanese alcohol culture is much more food-based than, for example, the U.K.'s, where I come from.)

The last graph I will pull out of the Suntory release (No. 10) reveals the prevalence of homemade highball making. Just over 58 percent of people who drank highballs at home said they make them themselves, while only 41.7 percent said they come from a can.

Email ThisBlogThis!Share to TwitterShare to FacebookShare to Pinterest
Labels: Suntory

Great analysis on a drinking trend that looks like it's set to continue expanding. So much different on how Japanese Whisky is actually viewed back here in the U.K.

For what it is worth, I think it is quite likely, given the extreme faddishness of Japan`s booze market, that the increase in the second graph will level off and then start to fall away. That is what has happened with most previous "booms". Then what? The fashion that is bubbling under here in Tokyo is craft beer, but that will be difficult for the big brewers who control distribution to harness. But an almost necessary result of their journey into cheap fizzy imitation beer, as I said in my book, is an eventual move toward proper beers that can differentiate themselves from the yellow fizzy stuff. Craft beer may not be able to grasp a significant market, but we might see some differentiated mass beers. Mass marketed fruit beers?

Craft beer, with the emphasis on real ale or cask conditioned ale, is certainly what has occurred in the U.K. for the last few years. It's enabled the rise of the small and micro brewery as independent businesses and although is not a dominant part, it is the one area of growth in an otherwise stagnant market. With Japanese drinking seemingly requiring a sweeter product I'm guessing the big market players will still create neutral yellow fizzy stuff but with a spin - much the same as soft drinks manufacturers added vanilla or citrus? It will be interesting to see how it all pans out. In the meantime I better buy a copy of your book to get some further insights on Japanese drinking culture!

I'm new to your blog (read about it in Whisky Japan by Dominic Roskrow), and I was wondering if you've posted a follow up to this piece. I work in a restaurant in Orlando (on Disney property) named after a famous celebrity chef, and my back of house manager/beverage purchaser told me that Suntory is priming for an American highball marketing push. As a contributor to the restaurant's cocktail menu, I'm interested to see how this highball phenomenon has panned out in Japan over the last several years.

Good question, Brantley. The answer is long but fortunately I can point you in the direction of a good source on this and much more... my recent book "Whisky Rising", 400 pages with everything you want to know and more!

Dear Brantley. I wrote the original piece but am afraid I am a bit out of touch having left Japan to live in UK. Stefan is your man. My impression is that the trends identified here are still being played out. The whisky highball is still popular. Perhaps not cresting fad of a few years ago, but still being drunk by young people, widely marketed etc. In 2016, the highball market expanded (general whisky sales up 2% on year before). The Suntory thing that year was Jim Beam as a highball in a beer mug--and that drove sales of Jim Beam up 37%. Suntory, who are the big drivers of this, marked a decade of highball promotion this year and seem to feel it has not run its course yet:http://www.suntory.co.jp/news/article/12809.html
Bit out of date, but you may also be interested in this general summary of Japanese whisky market in 2016 in English
https://www.google.co.uk/url?sa=t&source=web&rct=j&url=https://gain.fas.usda.gov/Recent%2520GAIN%2520Publications/Whisky%2520Market%2520Japan_Tokyo%2520ATO_Japan_2016-05-06.pdf&ved=0ahUKEwjyqK7FndbUAhXsIMAKHd-7DBYQFggdMAA&usg=AFQjCNGqAsuemsvyefAWGhAJ7Vh6AVZqtw

And forgot to say that would be very interested in any more information you get about highball push in us and your experience of its Chris.