"Mizunara"... the word itself is to many Japanese whisky aficionados what Pavlov's bell was to his illustrious dogs. When a Mizunara bottling is released, people reach for their wallets faster than they're used to - these bottlings are usually sold out within a matter of days, if not hours. And woe betide you if you've got the "mizunara bug" but happen to be otherwise occupied during those days or hours - in other words, if you happen to work for a living -, because then you'll have to pay for it and pay for it dearly ... on the auction circuit. 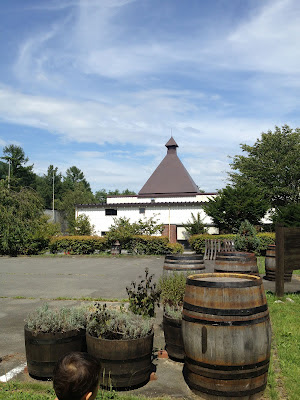 What is the appeal, I hear you say? Sure, a big part of it is the uniqueness factor - it's Japanese oak - but there's more to it than that. The wood brings flavours to the game that you just don't find elsewhere, and sexy flavours they are too, at least to my mind: sandalwood, incense, the smell of temples here in Japan, strong coconut aromas, etc. Like most discoveries in whisky making, and indeed the discovery of whisky making itself, the use of mizunara is rooted in serendipity. As importing casks for the maturation of whisky became more difficult as the Second Sino-Japanese war escalated, Japanese distillers - Suntory at the forefront - started looking for domestic alternatives. Coopers started using Japanese oak, but they quickly discovered their homegrown oak was more difficult to handle than European or American oak. With Japanese oak, the quantity of tyloses (blocking the radial pores of the wood) is much less and so the wood is more porous making casks more prone to leaking. This is one of the reasons why mizunara staves are cut quite thick. Japanese oak also has more knots than European or American oak, so it's harder to cooper from that point of view as well. It wasn't just challenging to the cooper's skills, it was rather challenging to the palate as well. Blenders felt whisky matured in mizunara casks was too in-your-face in terms of aroma and taste. It just overpowered everything else in the blend. What they didn't know at the time, but discovered later, was that mizunara wood needs time to work its magic... a little bit like Henry Rollins - five minutes may just bewilder you, but go to a four- or five-hour show and you'll know what I mean!

Anyway, back to whisky. Suntory and Nikka all make extensive use of mizunara wood, although it is more expensive than the standard alternatives. It's an important part of their signature blends and the awards they've picked up over the years clearly show the trouble is worth the effort. For smaller distillers, it's much more difficult to use mizunara - obviously because they lack the economies of scale - so most of them don't (didn't) bother. Unsurprisingly, Akuto-san (Hanyu/Chichibu) is the exception. Never one to avoid obstacles, he has recently started experimenting with using mizunarawood for the cask heads only. There is another exception, however.

A few weeks ago, I happened to be at Mars (Shinshu) Distillery in Nagano prefecture - and I spent a bit of quality time in their warehouse. Imagine my surprise when I saw this: 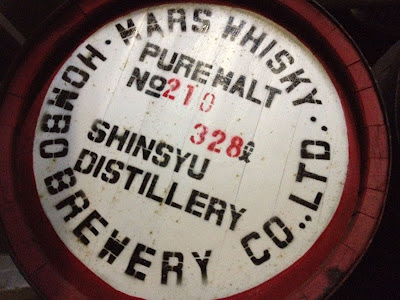 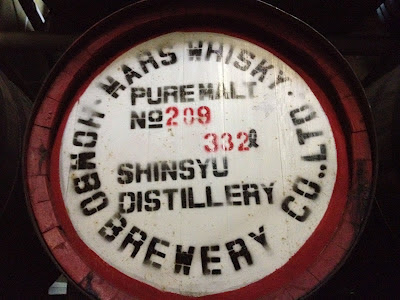 two mizunara casks that have patiently been maturing for decades. The master distiller told me they stayed away from those casks - the flavours too overbearing, the ugly ducklings of the warehouse - but that in recent years, they had noticed a change... a mellowing in profile, the rough edges gone and that finally, they may be coming into their own and may be reaching their prime soon. There are no plans to bottle these, as yet, but when they do, make sure you're one of the lucky few to hear the bell ringing.
Posted at 1:14 AM

Thanks for this post. Did you pick these out as mizunara casks by the thickness of the staves?

No, the master distiller told us.

Any word if these casks have been opened since the writing of this article?