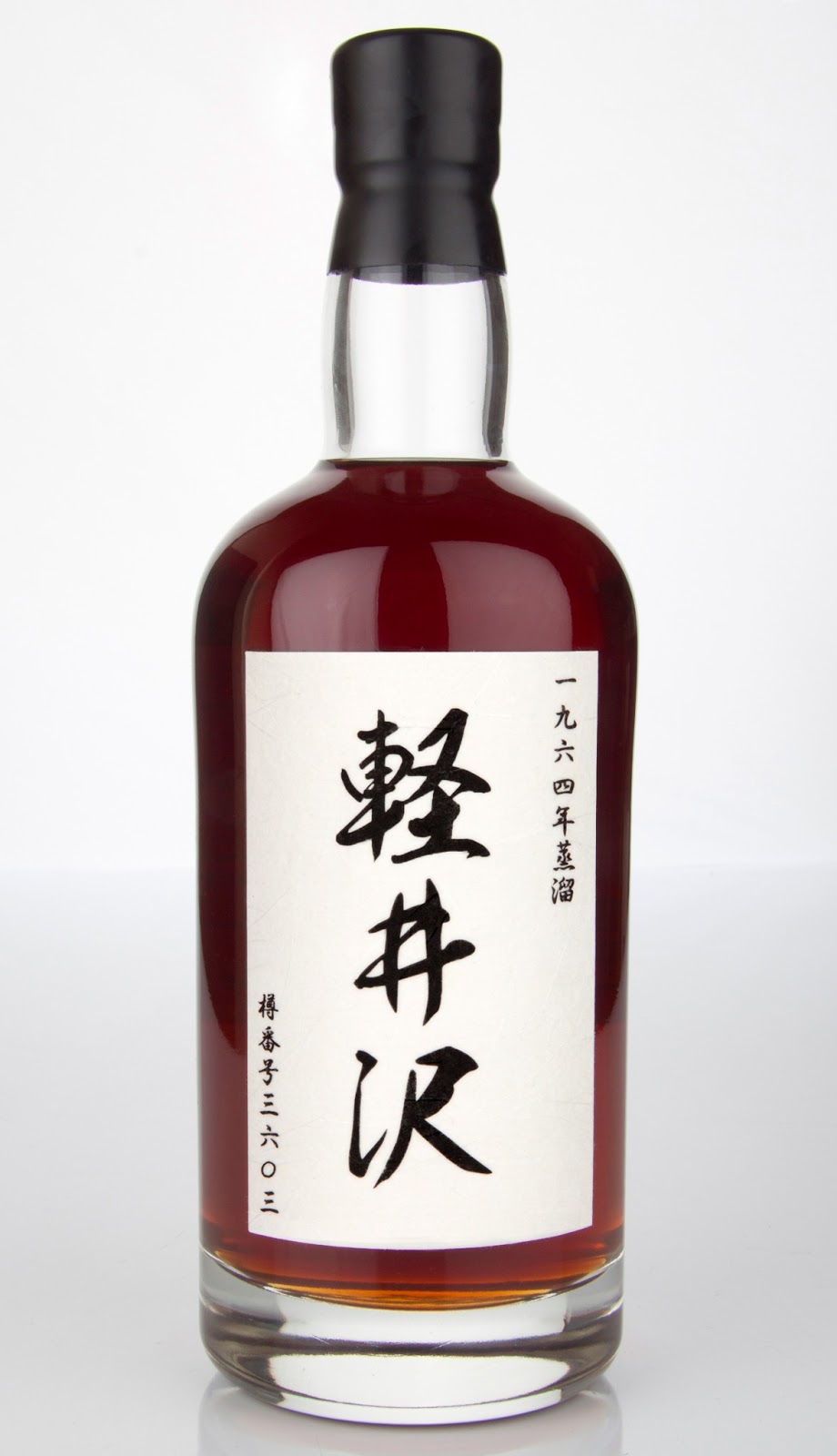 Today, we’re delighted to be able to finally share one of the best-kept whisky secrets: the release of an extraordinary 1964 Karuizawa. Drawn from cask #3603 after more than 48 years of maturation, this is the oldest Karuizawa released to date. Michal Kowalski of the Polish investment company Wealth Solutions wanted a worthy follow-up to his Glenfarclas 1953 and he knew, right from the start, this was going to be a Karuizawa. It was a long process from wish to reality – we were there when the whole project was conceived and were honoured to be able to help in small ways along the road – and the loving care and attention to detail Michal surrounded this exceptional whisky with is simply beyond words.

Most whisky enthusiasts will remember the Glenflarclas 1953, bottled on 13 February 2012. The 1964 Karuizawa will be launched in Warsaw exactly one year later. If Michal keeps doing this annually, Poland will probably be the best place on earth to be for the whisky enthusiast on Valentine’s Day. Just to get the facts out of the way: cask #3603 was filled on 1 September 1964 and bottled at cask-strength (57.7% abv) on Christmas Eve 2012. It yielded a mere 143 bottles – all of which have been presold to Wealth Solutions clients. One lone bottle will be available from Master of Malt, but not for very long, I suspect. 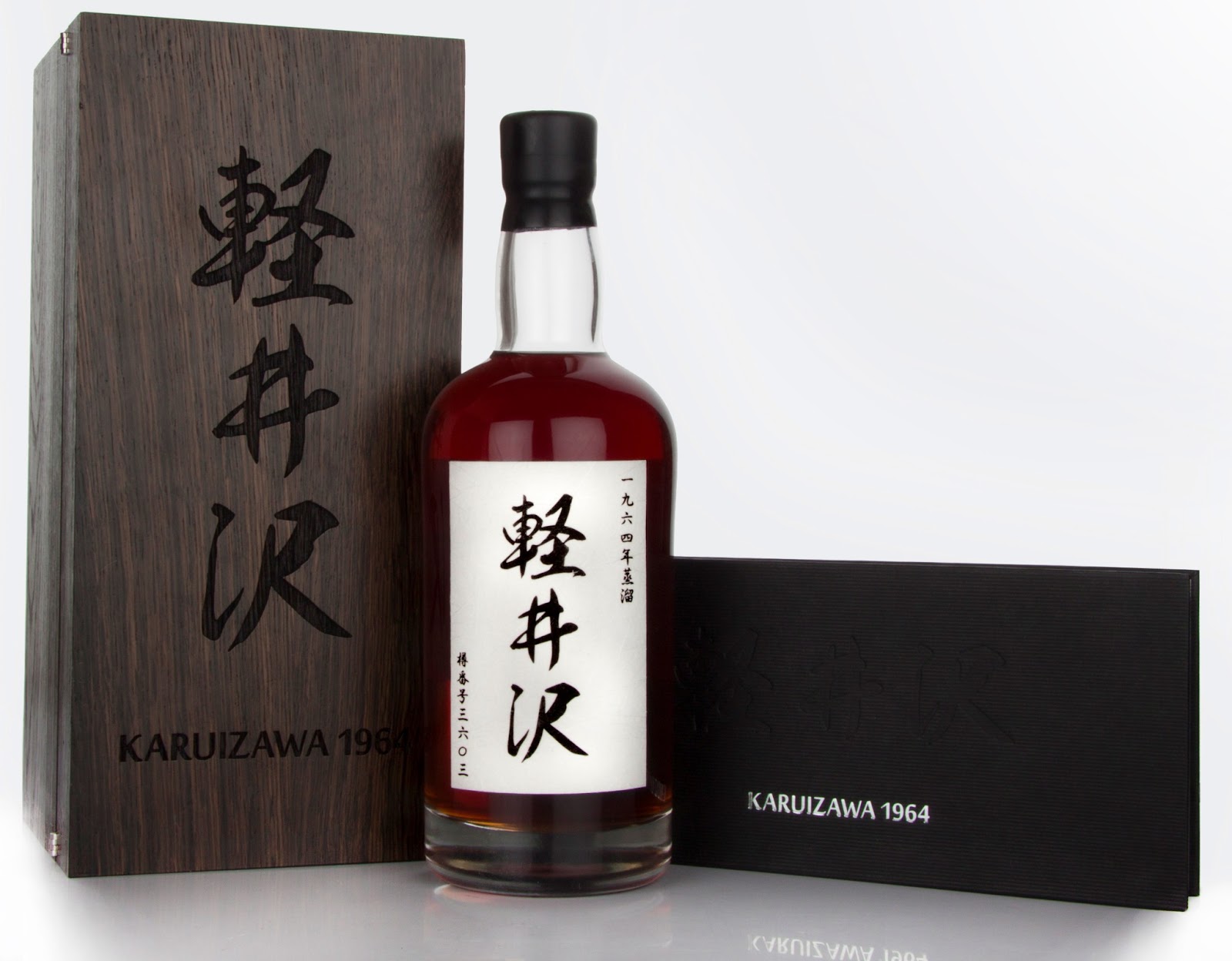 The presentation is absolutely top-notch: a bespoke, heavyweight version of the traditional Karuizawa bottle is housed in a beautiful wooden box with a front made of Polish black fossil oak with the characters for “Karuizawa” engraved in it. The wood is hundreds of years old and has been recovered from ancient Polish swamps – this is a reference to the last character in the name “Karuizawa”, which means “swamp”. Each bottle comes with a full-colour, 35-page book, containing a fascinating appreciation of Karuizawa distillery written by Dave Broom as well as tasting notes by 6 writers/bloggers (Broom, Dominic Roskrow, Marcin Miller, Neil and Joel of Cask Strength & Carry On, Serge Valentin and yours truly). 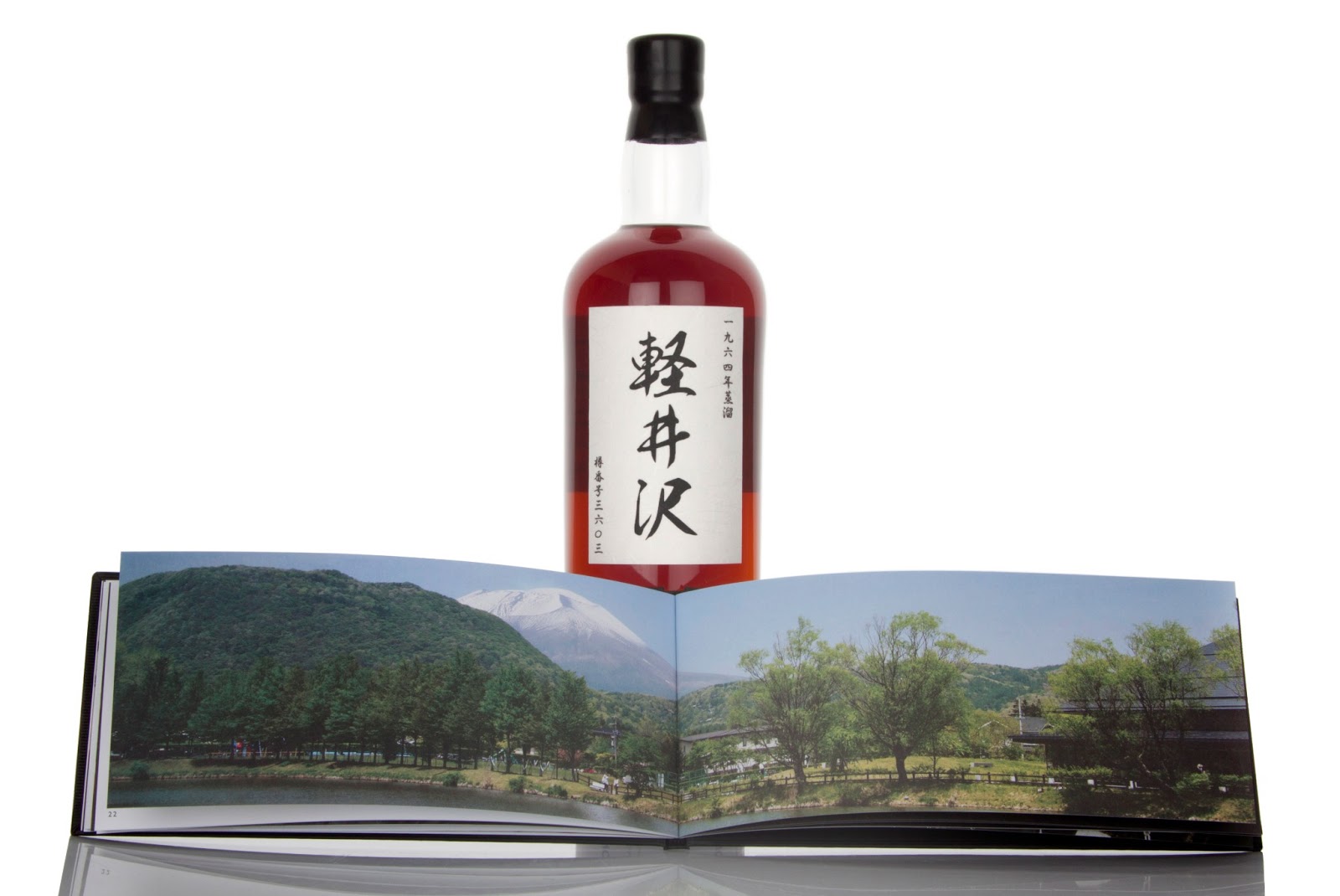 So what’s the whisky like? Well, I last tasted it half a year ago and, at the time, I wrote the following notes (they appear in edited form in the book):

“Nose: starts off with a prelude of annin dofu (almond tofu) and maraschino cherries, which soon gives way to a triple fugue of forest notes, tree fruit notes and waxed wood notes. The initial interplay is between the forest notes: suggestive of a forest in spring after rain, incredibly fresh, with hints of pine trees, boulder fern, sandalwood and a feint eucalyptus note. Soon after, seemingly out of nowhere, fruit notes start to appear: overripe apricots, Yubari melon (a Hokkaido cantaloupe variety), nashi (Japanese pears), some dates in the background. Underneath these are subtle hints of blood oranges and ruby grapefruits. On the back of these fruit notes, something reminiscent of a recently polished chapel starts to develop, with some freshly-baled hay, heather honey and a hint of freshly-crushed pink pepper thrown in the mix. Water tends to foreground the fruit notes, pushing green apples and underripe peach notes to the fore; it also brings some wet grass drying in the sun to the party.

Palate: the nose sets up certain expectations, but the palate gracefully sidesteps these expectations, only to reveal a whole new dimension – such is the complexity of this whisky. Neat, the initial impressions are acerola, brambles, gooseberries and orange liqueur. There’s also a distinct kashiwa mochi (rice cake wrapped in oak leaf) note. The sour – pleasantly sour, that is – flavours soon give way to an equally pleasant and seductive bitterness: goya, walnut skins, kale-and-green-apple juice, and an ever so slight liquorice note. As if that’s not beguiling enough, water brings out a prominent sudachi (a Japanese citrus fruit) note – something I never thought I’d find in a whisky but there it is! How a whisky this old can be this refreshing is just one of the great mysteries of the universe.

The finish is medium-long with hints of kiwi jam, also lingonberry jam, sweet-and-sour sauce, goya again, and an incredibly delicate sweetness at the centre of it all. 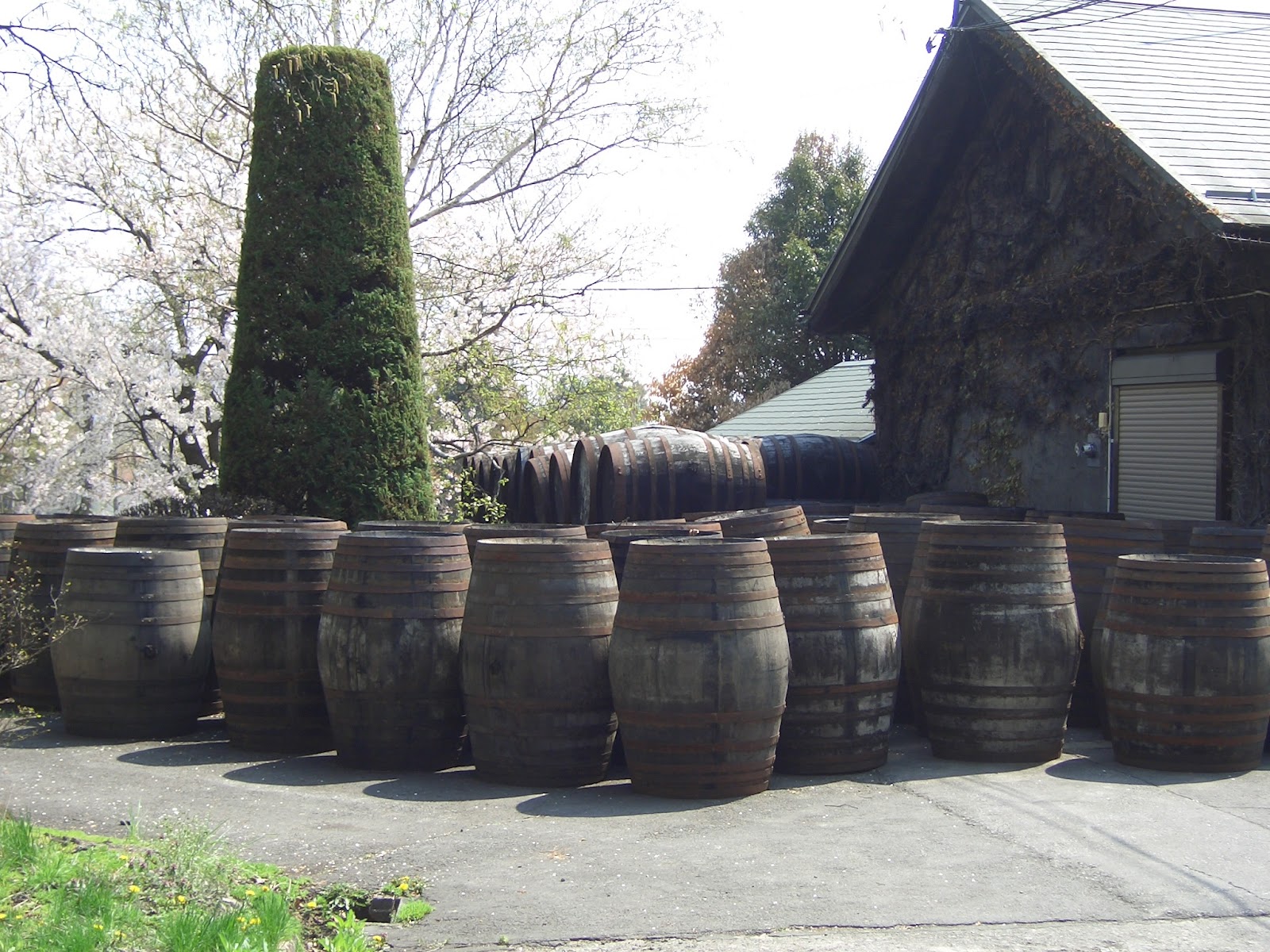 It’s fairly common for commentators to compliment mature whiskies on how young and vibrant they are despite their old age. This 1964 Karuizawa is far beyond such platitudes. Let’s not pretend: only time - and a large dose of luck - could have conspired to make it what it is. And what it is, is one of those rare whiskies that creates a world of its own and holds it together so beautifully it’s almost like an image of nature at its best. “
Email Post
Labels: Karuizawa Poland

Lukas said…
That's very interesting information. Do You have any more news about that? Are they going to make some official presentation? If yes, is it possible to go and see?
Greetings from Poland.
Lukas.
February 13, 2013 at 3:49 AM

Stefan Van Eycken said…
Lukas, the launch event in Warsaw is ... today, but it's an invitation-only event for Wealth Solutions clients. There's not enough whisky to go around so they had to limit it.
February 13, 2013 at 7:49 AM

Unknown said…
Any idea on the price?

Lukas said…
On the official site of Wealth Solutions I found that one bottle of this Karuizawa is about 12500 british pounds. All the botteles are already presaled.
Below there is link about that in polish. It is from October 2012 so the details may have changed.

Stefan Van Eycken said…
It'll be priced a little under 9,000GBP. But save for the one bottle mentioned in the post, everything's already been pre-sold.
February 14, 2013 at 3:45 PM

Stefan Van Eycken said…
Just to be clear: the bottle you saw on the Wealth Solutions website priced at 12,500 GBP is NOT the 1964 Karuizawa for Poland, but the forthcoming 1960 Karuizawa (of which there will be less than 50 bottles to be shared among the Karuizawa Partners in Japan, the UK, France, Taiwan and Scandinavia).
February 15, 2013 at 8:01 PM

wusimon said…
I am a Karuizawa's loyalty fan,just return today from Tokyo,before Tokyo,I also stop to Karuizawa for two days search your liqueur..my tour guide told me this factory sold to Santory Beer factory,and now totally shut down, no more in business..I returned to Tokyo to looking for all local liqueur stores, still can't find any store has left..what's happening? where I can get your whiskey? better let me know??
February 19, 2013 at 11:11 PM

Stefan Van Eycken said…
It's probably harder to find Karuizawa whisky in Tokyo (or the rest of Japan for that matter) than it is in Paris or London. So, there's no point in looking around for any - except on auction sites, of course. Also, as we reported before, the distillery - that is to say, the property itself - has been sold and is closed. It is... alas, no more.
February 20, 2013 at 3:32 PM