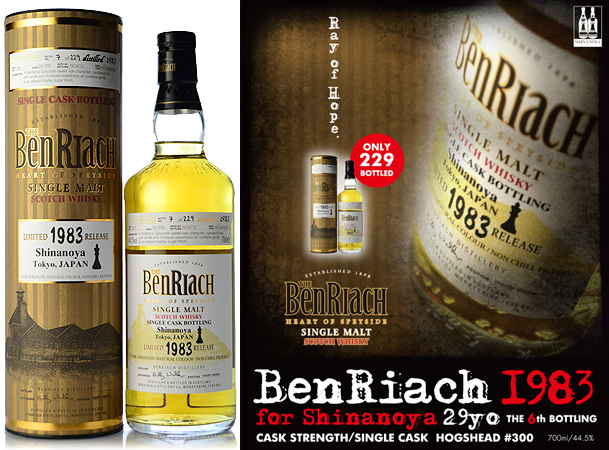 To say that the people at Shinanoya are fans of Benriach is a bit of an understatement. They’re about to release their 6th exclusive Benriach single cask bottling and whisky enthusiasts who share their love for this distillery’s output know very well that the Shinanoya whisky-buyers have a knack for picking casks of exceptional quality.

In Japan, as elsewhere, Benriach casks from the 70s are instant hits. However, over the last year or so, with stocks from that decade dwindling fast, prices have shot up – to the point where retailers are being forced to consider slightly younger stable mates. For this, their 6th private Benriach, the Shinanoya people have selected a 1983 hogshead (cask #300) – one year shy of 30 – with an outturn of just 229 bottles. It’s very reasonably priced (16,800 yen) and will officially go on sale on March 27th.

On the nose, the initial impressions are melon sorbet, Jonagold apples, candied pineapple, also a hint of tinned peaches. Water really pushes the melon to the fore, but it also brings out honey butter on toast, apricot Danish pastries and a subtle vanilla note. Words don’t really do it justice, to be honest – it’s quite extraordinary. On the palate, it’s like a universe of sweetness but with an intriguing tartness at the centre: lemon-honey cupcakes, Greek orange-honey cake, baklava cigars (this is not something you smoke, by the way – it just looks like a cigar) and in the background some gentle wood spice. Water spotlights the woody flavours a bit more, which is nice. The finish is long, prolonging the palate’s themes while adding a white chocolate mousse note and a hint of summer hay fields, strange as it may sound.

Unknown said…
Where are they selling this?! It looks amazing! I live in Tokyo, but can't read or speak Japanese all that well. The provided link takes you to a Japanese site, and it's mostly "greek" to me. Any help would be greatly appreciated!

Stefan Van Eycken said…
Hi Thomas, thanks for your comment. It is amazing.
Shinanoya does have physical stores, but these sort of special bottlings usually don't even make it to their stores. They usually sell-out online. My advice would be to ask a Japanese friend to help you, have your credit card ready (or choose "cash on delivery") and you don't even have to pay for shipping!
March 25, 2013 at 2:52 PM

Unknown said…
Thanks Stefan! that is a good pointer. So is that website link an online ordering site? I will definitely have a friend help me out. Thanks again!
March 25, 2013 at 5:56 PM

Stefan Van Eycken said…
Yes, it's an online ordering service. Easy to use - you just need to be able to understand Japanese. Take my word for it, though: don't waste time. These things have a habit of selling out in a matter of days, sometimes even hours. Good luck. I'm sure you won't be disappointed. I'm drinking it as I'm typing this, and it really is stunning. This will really make your spring (and summer, if you treasure it).
March 25, 2013 at 6:17 PM

Unknown said…
Thanks Stefan! My wife was able to get one of the last two bottles at the store in Shinjuku reserved for her. She had a Japanese friend help her. She picks it up tomorrow. I'm pretty excited to try it out when I get back! Thanks again!
March 29, 2013 at 12:40 AM