Perspectives on the Karuizawa 1960 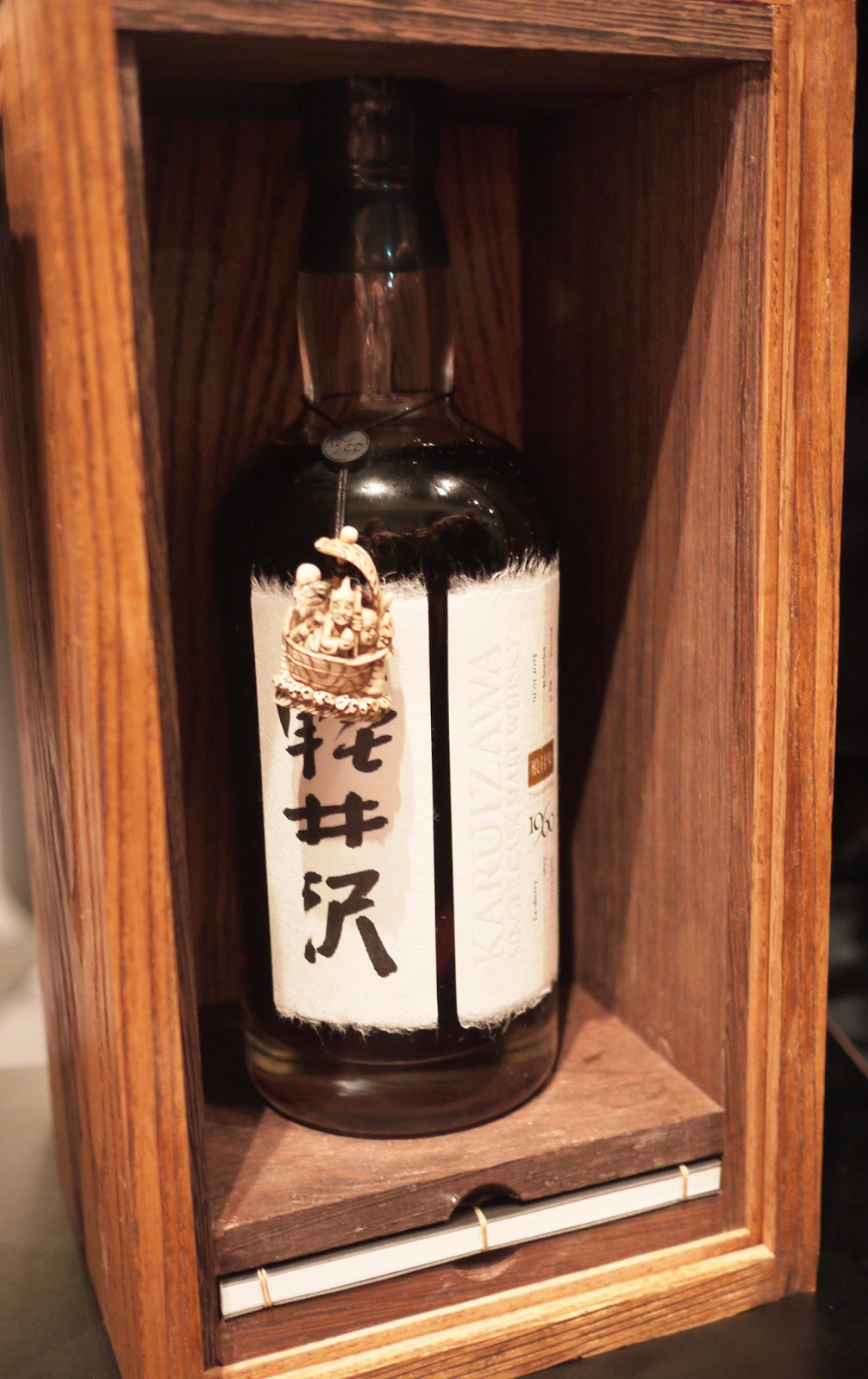 As mentioned in our reports from the Tokyo International BarShow / Whisky Live 2013, the absolute highlight of the weekend was the unveiling of the oldest single cask Japanese whisky ever bottled: Karuizawa cask #5627 (250l ex-sherry hogshead) from 1960. There are just 41 bottles of this and they will be available from the Karuizawa partners in Japan, France, the UK, Taiwan and a few in Scandinavia as well at 2,000,000 yen / 12,500GBP.

We spoke with Marcin Miller (on the right in the picture above) of No 1 Drinks, and Matt Chapman (left) of Contagious, the company who designed the packaging.

Marcin: “I first started working with Karuizawa in 2006. We began by bottling single casks and selling them around the world. After a while, it became apparent there was an opportunity to buy the entire inventory and in August 2011, we finally signed the contract enabling us to have all remaining casks. It was a long process and it was quite a painful process.”

“In February of last year, I took a party of people – including Dave Broom and some friends from Taiwan, France and the UK – to the distillery. On the one hand, it was a very happy occasion because we were in Japan, with friends, at a whisky distillery. But it was actually quite sad, because a distillery has to be a working place, a living place. There had been no whisky made at Karuizawa since 2000 and when our group left the distillery, the two last remaining employees locked the gates behind us. The result is that every time one of us opens a bottle of Karuizawa, we are effectively drinking Japanese liquid history.”

“My love of Karuizawa is based on the character of the whisky and the decision to buy the entire inventory wasn’t just a purely commercial decision. It was driven by our passion for the whisky. Within the inventory, the oldest cask we had was from 1960. The angels of Karuizawa were relatively thirsty, so we only have 41 bottles.”

Marcin asked the people at Scottish design agency Contagious to create something to ‘frame’ the whisky in the right way. 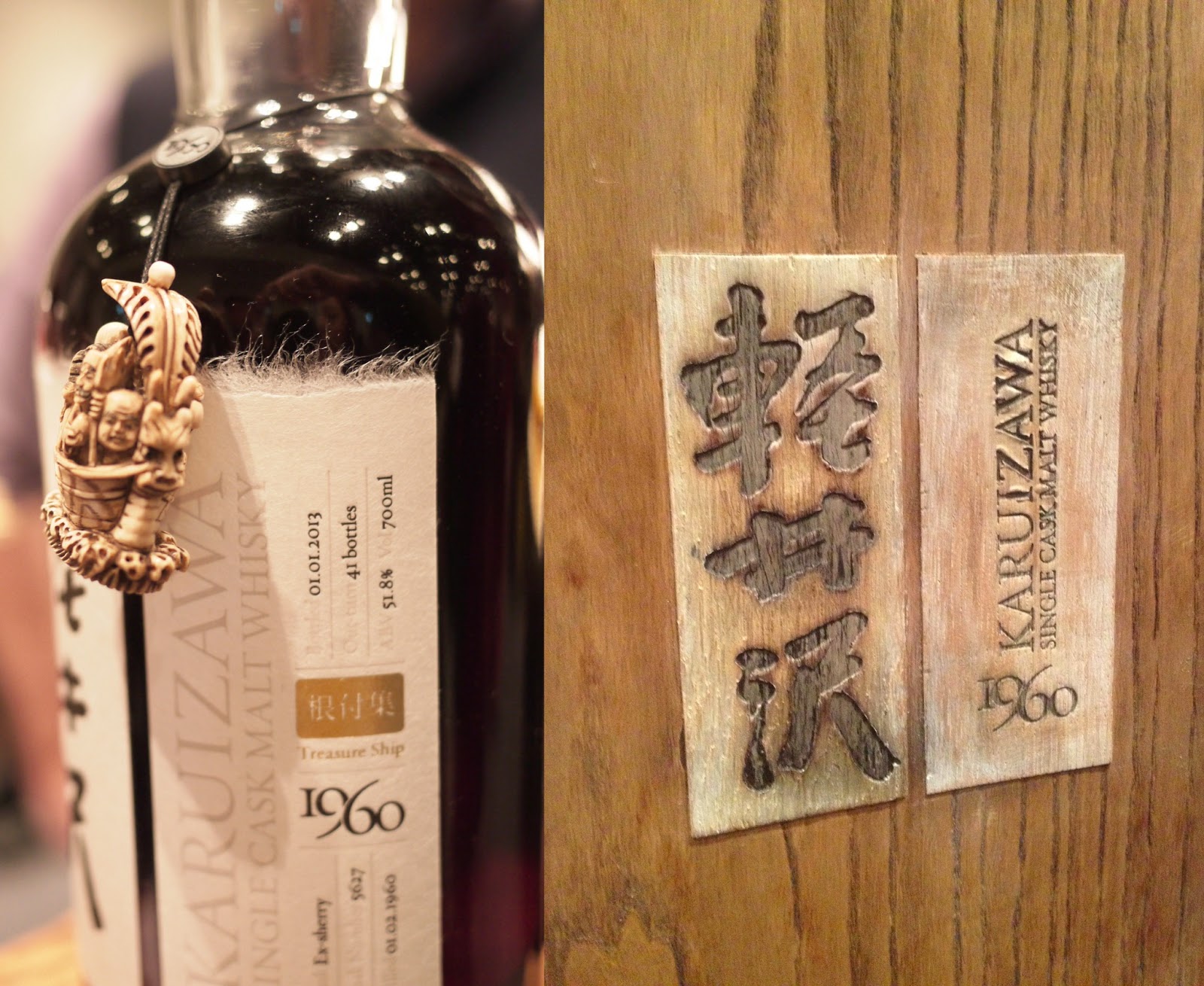 Matt: “Marcin didn’t want anything flashy. We did a lot of research into very, very expensive whisky and there are usually a lot of gimmicks involved – lots of materials that are just there for the expense and have nothing to do with the actual whisky. Everything we did, we wanted to make it feel like it was quite authentic. And that was the brief: try and set something up that helped with the story.”

“The exterior of the box is made in a lighter wood, the interior in a darker wood: to mirror the cask. We chose ash for the outer box – because of the detail in the grain – and for the inner box, we used wenge – which is naturally dark and gives the impression of a flamed cask. When we were making the box, we didn’t want to make use of any metal fixings, so we’ve designed it in such a way that it opens like an old closet box. So the first problem is how to get into the box.”

“The front of the box is inlaid with actual pieces of the cask [the cask head, ed.] that we branded with the Karuizawa kanji on one side, and the English on the other. The reason why there are two labels is to reflect the two cultures that have come together to create this whisky. And that’s reflected again on the bottle. We employed a number of craftsmen from both Japan and the UK: the washi paper was made in Japan, and we used an award-winning calligrapher to create every label on the right for every bottle. We used traditional letterpress for the label on the left from a letterpress in Scotland.”

“We also wanted to do something quite different with this for the numbering. As Marcin mentioned, there were only 41 bottles that came out of the cask and instead of numbering them 1 to 41, we wanted something special. We purchased a collection of 41 netsuke and individually named each bottle to link with the netsuke, so they’re all named differently. They’re all unique.” 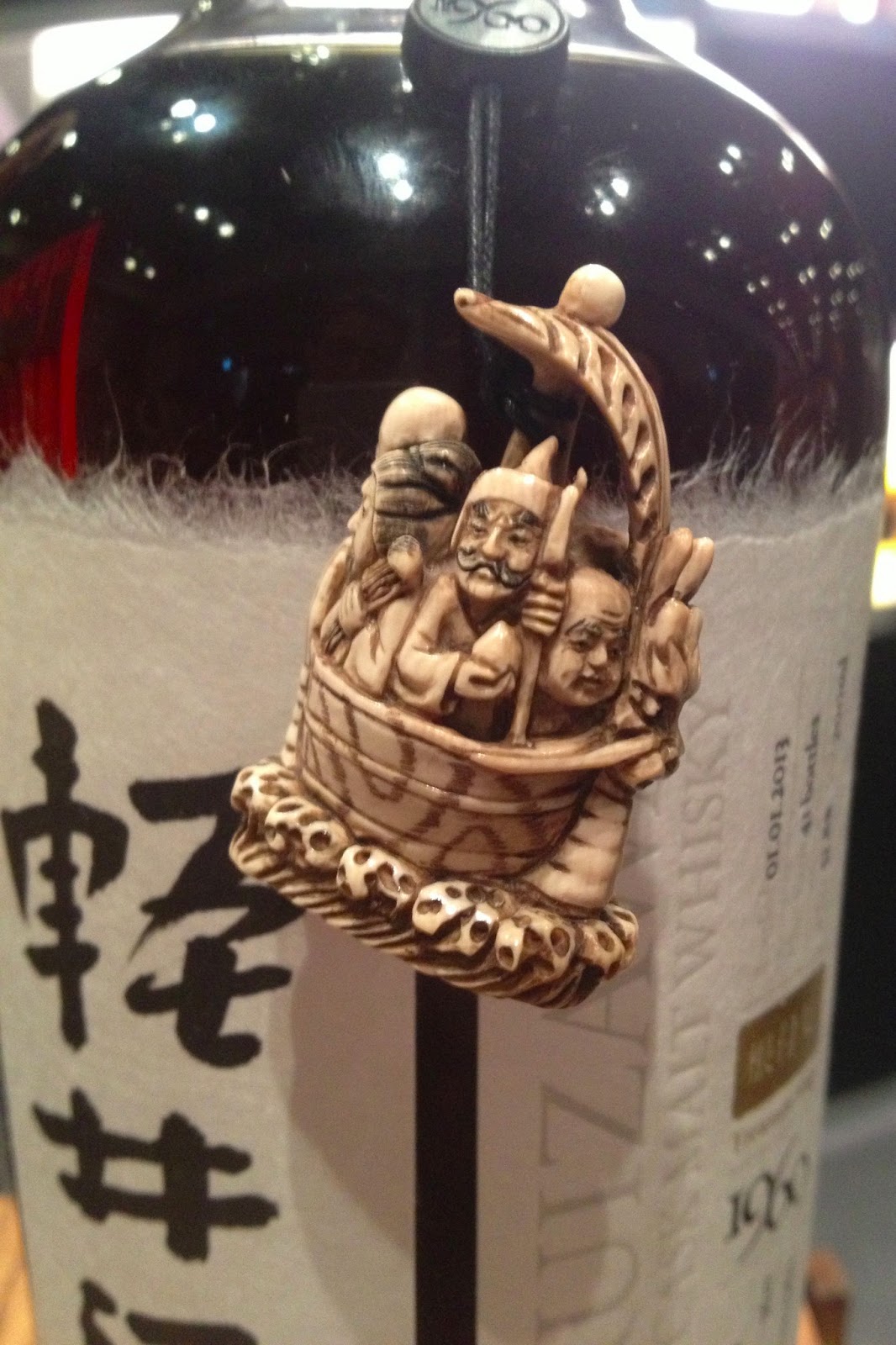 As you can see in the pictures, the bottle unveiled at the show was “Treasure Ship”, in reference to the netsuke that goes with that particular bottle. There’s also a special book, written by Dave Broom – which is different from what he penned for the 1964 Karuizawa for Poland.

Matt: “To give you a little indication of the history of Karuizawa, we created a book with some of Dave Broom’s lovely words which is a beautiful read about two things, actually: one about the time he visited Karuizawa with Marcin and also the history itself of the distillery. I think that brings the whole story to life. From the front of the book, it’s in English – and from the back, it’s in Japanese.”

As a design agency, Matt and his team work primarily on spirits – having done work for Pernod Ricard and Diageo brands as well as a lot of independents, and not only packaging but also brand communication, brand homes and distillery work (particularly on Islay for Laphroaig, Lagavulin and Bowmore). This was, however, the first time for them to work on a Japanese project.

Matt: “As said, we wanted to have both UK and Japanese craftsmen and, obviously, getting the right people involved from Japan was quite tricky. We’re lucky we’ve got a Japanese designer who works with us, and she’s from Tokyo. She put us in touch with a Japanese lady who now lives in London and who works as a go-between for Japanese craftspeople – that’s what she does. It was quite difficult to find an antique dealer who sold netsuke so we had to get over that as well. Initially, making those connections was tricky, but once we got the right people in place, that element of it was quite easy. I think the most difficult part of it was not overshadowing the whisky. We wanted something that felt special enough that you’d be amazed by it, but that wasn’t too blingy. Getting that balance right took a lot of trial and error.”

What makes the entire presentation so special, in our opinion, is the fact that it brings together the craftsmanship and expertise of so many people in different corners of the world. Just to give you an idea of what was involved: the whisky was, obviously, made in Japan but distilled using malted barley imported from Scotland; it was then matured in an ex-sherry cask; it was bottled on the 1st of January 2013; the actual bottle is a specially commissioned heavy-weight version of the classic ‘vintage Karuizawa’ bottle; the washi paper for the labels on the bottle was handmade in Japan by Norito Hasegawa, a third generation papermaker; the calligraphy on the left-hand side is the work of award-winning calligrapher Soji Nishimoto; the letterpress on the right-hand label was done in Glasgow; the book was printed in Yorkshire, but the binding was done in the South of England; the box was modelled on traditional Japanese puzzle boxes but handmade in England; the netsuke came from a UK antique netsuke collector and the authenticity of the netsuke was checked by an expert who lives in Eastern Europe. That’s the sort of global collaboration it took to put all the elements together.

Marcin had brought a bottle of the second-oldest Karuizawa – a 1963 – to the show to share with those present. This will be released in September/October and about 150 bottles will be available. The people at Contagious are currently working on the packaging of that release.

Matt: “When we presented for the 1960, we had a whole raft of ideas that we didn’t use. And there was one in there which Marcin absolutely loved and which he had in mind for the 1963. It’s still in progress, so we’ll see how it works out.”

Special thanks to David Croll for inviting us to this momentous event.
Thanks also to Marcin Miller and Dave Broom, for the pleasure of their company at and after the show; to Matt Chapman and Jason Dobson, for sharing aspects of the creative process with us; and to our friends from Hong Kong for providing us with some of their photography.

Excellent post and great to read. Sensitive, classy and full of respect for the people, the places and the history.

Thanks very much for your kind words, Dan.

I've driven by the site a couple of times over the last few years and have wondered what would it take to resurrect production there, beginning with buying the property/facility...

Well, it would take a time machine and a small miracle. Kirin has handed back the Karuizawa distilling license and sold the actual place to a property developer. Nobody knows what happened with the stills and other equipment. There is absolutely no chance of whisky ever being produced again there.... Sad but true.

Stefan, you´ve probably already heard this but when we were there in october all equipment was still in place. The place looks ghostly derelict but everything apart from the scasks seems to be there.

Micke, glad to hear from you! I've heard conflicting reports about what's happened to the site, but you - having been there and seen it with your own eyes - are the first reliable source! So, how did you guys get in? Could you actually enter the buildings (the former stillroom, warehouses, etc)? Would be interesting to hear a bit more about your experience there.
Cheers!