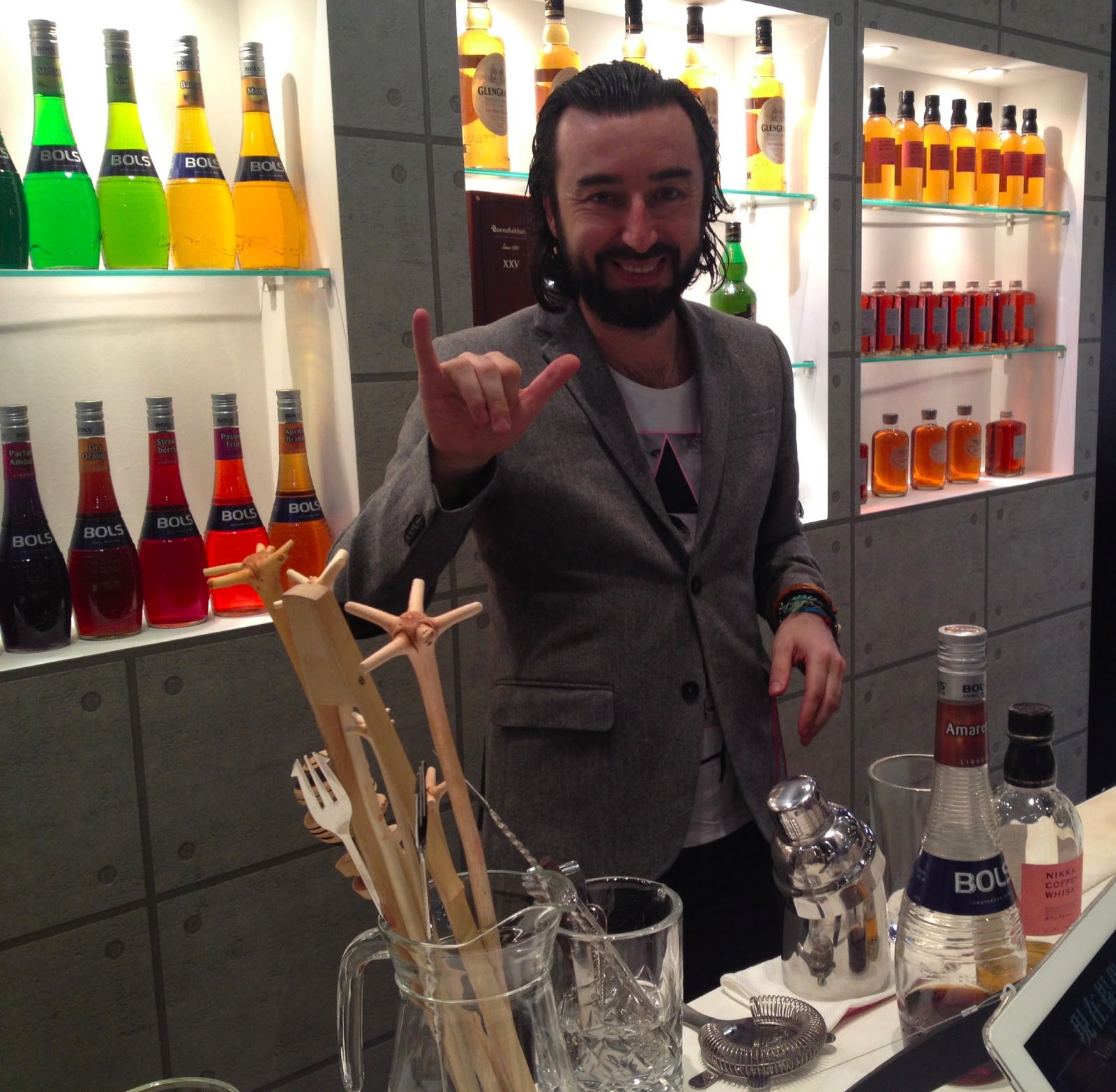 If you only have one cocktail at the TIBS, let it be this one: the “Masataka Swizzle”. We’re incredibly lucky to have the great Stanislav Vadrna, of the Analog Bartending Institute, at the show this year so don’t leave without visiting his section of the Nikka area. We asked him to tell us a little bit about what went into the creation of this amazing cocktail:

“In 2008 or 2009, for Paris Whisky Live, we did a promotional event for Nikka on the river Seine and I was presenting some drinks there. I came up with this idea: “let’s make a swizzle”, because I was very much into tropical drinks and I wanted to come up with some drinks which, based on whiskies from the Nikka range, would have a kind of tropical feel. There’s a tropical part of Japan – Okinawa – so why not? But there’s also a whole range of climates, up to the cold north of Hokkaido, so … crushed ice and a tropical feel, combined.

But the main idea behind this drink was to create something to honour the father of Nikka whisky. That’s why I named the drink “Masataka Swizzle” because for me, Masataka Taketsuru is the very first Japanese person who really, somehow, built a bridge between the West and the East. And for me, he is a huge inspiration in my professional life as well because when I thought of his way – of going to a very foreign country and learning the culture, the art and bringing it back to your culture and mixing it together – it reminds me a little bit of my own way. I first came to Japan, in 2006, and I was lucky to be trained by Ueda-san of the Tender Bar and then I went back to Slovakia and starting spreading the things I had picked up here all around… and now, it is as it is. So, Taketsuru-san is a real inspiration for me, because he respected the foreign country, its culture and art, and knew he could learn a lot from that.

But for him, it wasn’t just enough to get to know the taste. He wanted to get to the essence. And this is very much my personal philosophy as well. I’m not satisfied with the taste of the food, but I have to get to the essence. And, to get back to the Masataka Swizzle, that year I was very much into the history of ‘swizzling’ so my mindset back then was very focused on the swizzle category, which is a mixture of strong spirit – usually it’s rum, but in the very beginning, in the 18th century, it used to be jenever, but then people switched to rum – so: some spirit, some citrus, some sugar, some bitters and crushed ice. That’s the basic form for swizzles and for me… it’s very Japanese, because what I learned here in Japan is to focus on the process. The process is as important as the final result. So, I thought: maybe by creating a swizzle with Japanese whisky, I could turn these guys’ attention to swizzling. Because this technique has been forgotten. In the West, now, it’s increasing in popularity, but in Japan, it’s still an almost unknown thing. And I believe that, as soon as the “Masataka Swizzle” starts to spread across Tokyo and Japan, the Japanese people are going to start swizzling – and then, what will happen is: they will be the best in the world. So, they’re going to refine the style of swizzling and again, maybe in one or two years, we’re going to come back and see them doing that ritual. Because in bartending here, everything is a kind of ritual: shaking, stirring, jiggering, serving… everything. I’ve been influenced by this way very much, so now, I would like to bring something back. A kind of exchange. I do not need to push this, you know. It’s just here. Now, I have two days – somehow – to swizzle as best as I can and to share my passion with the customers, the bartenders and then we will see. But I truly believe it: this is a real ritual. It is a real connection, through this piece of wood [i.e. the swizzle, the wooden sticks on the left in the picture, ed.], and I really believe you can channel somehow your state of mind, your positive attitude into the drink, through this piece of wood.”

So what goes into a “Masataka Swizzle”?

“It calls for 50mls of Nikka Coffey Grain, 15mls of Amaretto, 15mls of fresh lemon juice, 2 dashes of orange bitters, 2 dashes of Angostura bitters and you can adjust the recipe to suit your taste. I started with 2,5mls of simple syrup. If you like it sweeter, you can go up. If you don’t – if the amaretto is sweet enough for you – you can skip the sugar. But I think it needs a little sugar. Then add crushed ice, swizzle it and swizzle it until the glass gets frosty and the surface gets foamy. Then you know that it’s nicely blended, that you’ve got the proper water dilution and the proper aeration because when you swizzle it, you don’t just want to properly blend it and get the right amount of water in it, but it must be nicely chilled and nicely aerated, because that gives you that smooth texture on your tongue. And then garnish it with a bit of fresh mint and a dash of bitters.”