Today, we’re thrilled to be able to unveil the second bottling in our series of Japanese whiskies featuring artwork taken from the last great ukiyoe artist Yoshitoshi’s final series of woodblock prints “New Forms of 36 Ghosts” (1889-1892).

It wasn’t our original intention to follow up our first exclusive bottling with another Karuizawa but serendipity pulled us back to this distillery for something quite special. We didn’t resist. While looking for stellar whiskies from other distilleries, we came across a Karuizawa cask from 1995 – as it turned out, the last cask from the 1995 vintage. Those who are familiar with the history of the distillery will know that 1995 was the one year in Karuizawa’s 45-year history of production when the predominant use of sherry wood for the maturation of its whiskies was abandoned in favour of the use of barrels that had previously contained Japanese red wine, so called ‘Chateau Mercian Rouge Casks’. Most of the whisky in these casks was bottled for sale at the distillery shop and a few casks were released as private bottlings (a couple for Scandinavia and one for Shinanoya).

We’ve always had a soft spot for these Karuizawa ‘Rouge Casks’ but the moment we tried cask #5022, we knew this was something really special compared with its siblings. We immediately decided to bottle this – the last and oldest (18yo) Rouge Cask and the last of the 1995 vintage – but got a bit of a cold shower when we found out how much, or rather how little was left in the cask. The last time it was re-gauged (about a year and a half ago), it contained the equivalent of 30 bottles. But while bottling what little was left, it became clear the angels at Chichibu Distillery (where the cask had been transferred after Number One Drinks’ acquisition of the entire remaining Karuizawa stock) had been particularly greedy. They got away with almost 6 liters and left us with a mere… 22 bottles.

Over the past year, we’d received quite a bit of mail from our readers bemoaning how the Karuizawa situation had become a bit like a Russian roulette for the consumer: if you’re online when bottles go on sale, you have a chance of getting your hands on one; if you just happen to be doing something else, away from the internet for five minutes, you miss out. Together with our partners at Malt City (who take care of the actual sale of our bottles), we decided to embrace this roulette concept but with one crucial difference: we wanted a level playing field, a situation in which everyone interested has a fair chance at buying a bottle. Therefore, the sale of this 2nd Nonjatta-bottling will not be on a first-come, first-served basis. Instead, it’s organized as a lottery: everyone who’s interested has four days to register (October 11, noon to October 15, 9am, local Karuizawa time) at Malt City. After that, an innocent hand (our editor’s 5-year old son) will draw the lucky winners. Obviously, the bottle itself isn’t free, but keen to start a new trend – offering ultra rare whiskies at affordable prices – we’ve kept the price as low as we could: 14,000 yen + tax (approx. 105 euro + tax / 140 usd + tax). If you’re interested, do read the fine print at the end of this post and visit the Malt City page to register for the lottery.

So what’s the whisky like? On the nose, you’ve got raspberries, brambles, blood orange jam, dried apricots, dried leaves, antique furniture – then, after a while, candied lime peel, Brookside Dark Chocolate Acai with Blueberry, red miso, old leather-bound books, cigar boxes but also lychee liqueur and hints of manuka honey, mint, eucalyptus and fennel. Just gorgeous – a whisky with so many tiny aromatic surprises in its folds. On the palate, loads of berries again, very thick and concentrated, like jam, with propolis throat candy, liquorice allsorts, spice cake (‘peperkoek’) and rooibos tea added to the mix. Then, an explosion of fresh citrus mid-palate (sudachi most prominently, also a bit of lemon and grapefruit) with strawberry sauce in the background. On the back of all that, spices (cloves, aniseed, nutmeg) and then a lovely, subtly bitter transition (kale-apple juice, endives) to the finish, where you get a sweetness so delicate yet intense (strawberry macarons and Turkish delights) it breaks your heart to feel it fade. But in the afterglow, you get these little reminders of what the nose and palate have spoken to you about… This is the whisky equivalent of ‘One Thousand and One Nights’. We love it – simple as that. 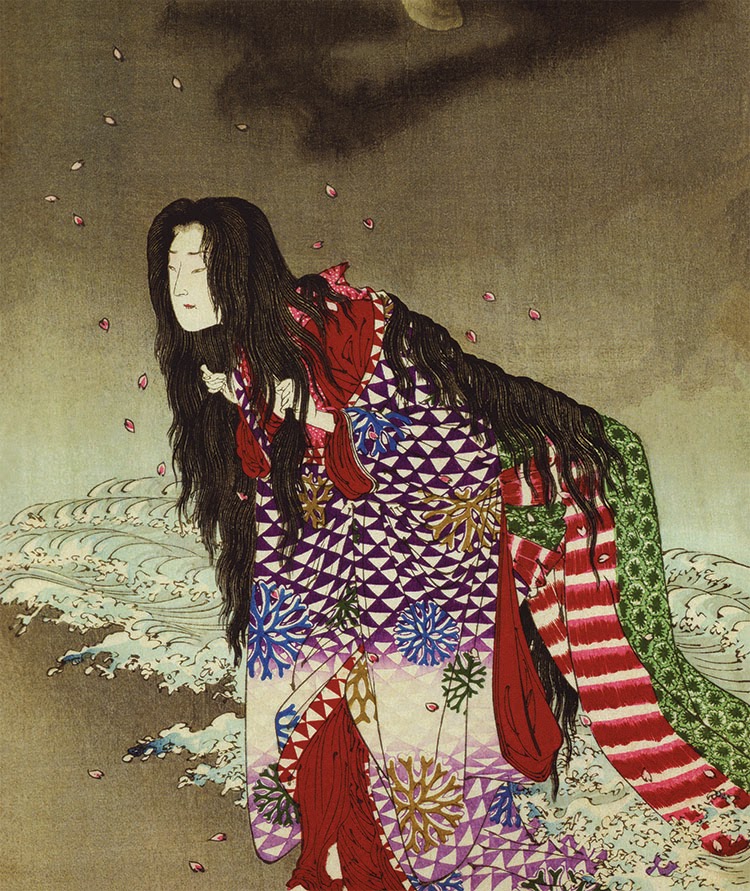 For the label, we selected one of our favourite prints from Yoshitoshi’s “New Forms of 36 Ghosts”: “Kiyohime Changes into a Serpent at Hidaka River” (no.11). Kiyohime was the daughter of an innkeeper in the village of Masago. Anchin was a handsome young monk who, during his annual pilgrimage to the Kumano Shrine, stayed at Kiyohime’s father’s inn. After many years, Kiyohime declared her love for Anchin. The devout Anchin told her he could not possibly return her worldly love and ran off to a monastery. She set off in pursuit of him but found her way obstructed by the Hidaka River. Consumed by anger, she began to turn into a serpent and swam over to the other side of the river, half-transformed. Anchin had fled to a nearby temple where he hid inside an enormous bronze bell. Kiyohime found him and coiled herself around the bell. So intense was her fury that the huge bell melted, killing them both.

We feel there’s a certain resonance between the story and the liquid in the bottle. Even though the vagaries of time have left us with only a handful of bottles, we felt this extraordinary Karuizawa ‘Rouge Cask’ was too good to be left to the angels or to end up in the hands of just one person. As they say, sharing is caring… and we want to share this with you.

- Go to this exclusive Malt City webpage.
- Please click the "Add to cart" button, and proceed in the NORMAL WAY. Entry is completed with this.
- No charge is made at this stage.
- Limited to one entry per person. Two or more entries by the same person will be disallowed.
- Entry is based upon the delivery address. Any entries with the same delivery address will be invalidated.
- Double (or more) entries will not be accepted.
- No forwarding services are accepted for this product. Malt City can only ship to a private address (the address of the person registering).
- Entry will close at 9am on October 15th.
- The Nonjatta team will draw the winners based on automatically assigned registration numbers.
- Malt City will email the winners and explain the purchase procedure on their website.
- The right to purchase the bottle is valid for 1 week after Malt City has contacted the winners (by email).
- Purchases by any people other than those chosen by the lottery will be disallowed.
Posted at 12:00 PM

Well done for the method you followed.
Wish some of the retailers applied the same logic.

Thanks very much for your supportive comment. We really appreciate it.

Yes, well done for the method, but is it only available in Japan?

It's available anywhere in the world where it's possible to send liquor by courier. Obviously, that's the way it has to be sent, so if your country of residence makes that impossible, that's a hurdle we can't overcome.

Thank you for your prompt reply. I am confused as the web page said Japan only market. I am in the UK so I will try to get a bottle!

Good luck and thanks for your support.

wow, only 22 bottles!
great idea to sell through lottery,
signed up and keeping fingers crossed :)

Thanks, Laurens - it means a lot to us that everyone is so positive about our lottery idea. Thanks for your support and good luck!

With Karuizawa prices getting downright absurd lately, it's great that you guys present the opportunity to get an awesome (and extremely rare) bottle at a great price. Fingers crossed here as well.

Good luck to you all!

We appreciate the positive support from our Tokyo and Osaka HQ!

Yep, for me the idea is amazing too.
Hope to win :)

Thanks very much, Guillaume. When we set up this lottery system, we didn't really know how people would respond to it. It is so encouraging for the Nonjatta team to hear that everyone is so positive about it. Thanks for getting in touch - and good luck!

I think it's great you're doing it like this. Given the demand (and prices) for Karuizawa, it's so nice to see a bottling that isn't going to whoever happened to see it at the right time. It's also especially nice since Malt City requires email confirmation of overseas orders, it allows those who aren't in Japan an equal chance.

I concur: i think it is the best idea you could implement, given there are only 22 bottles available.

By the way, the label is amazingly beautiful: i think it is the one i prefer from all Karuizawas (except maybe the 1971 Noh, which i love a lot too).

Keep up with the great job :-)

I'd even add about the lottery thing: it adds some "fun" spirit to the whole craziness about Karuizawa in particular - a little freshness to remind us, fans, amateurs and collectors... that this is only about whisky, i.e. pleasure !

Let's hope we can have the luckthat one of these bottles light end up in little old Belgium, keeping all my fingers and toes crossed

Hi to all. so is the draw over?

The registration period closed this morning. The draw is tomorrow... as soon as my son wakes up.

Perhaps we should make the winners to share the spoils!!

Thanks Stefan for your effort.

Do you plan for other Nonjatta bottlings for non-Karuizawa distilleries?

Yesterday I became the happiest Belgian on the planet. What a great and honest initiative. One of the 22 bottles is in good hands!

Glad to hear that... Yours is the only bottle in Belgium! Happy to hear that bottle found a good home. Enjoy!