Named after the ‘father of Japanese whisky’, the ‘Taketsuru’ range is one that Nikka is very proud of and understandably so. It’s a blend of malt whiskies from their Yoichi and Miyagikyo distilleries and it has captured many prestigious awards over the years. With the exception of the older expressions, it’s very reasonably priced and well-liked by ‘casual’ whisky drinkers and hard-core malt enthusiasts alike here in Japan. We’ve never really featured the whole range on Nonjatta, so we thought it was high time for a Taketsuru session. Well, we made it three sessions…

The first of these sessions took place in December of last year when I tasted the core range (12yo, 17yo, 21yo and 25yo), all blind but in the company of many other Japanese whiskies. The second session took place a few weeks ago (October 2013) and was spurred by the introduction of two new Taketsuru releases: a permanent no-age-statement one (NAS for short) which is set to replace the 12yo; and a sherry-finished limited edition of the new NAS (which we’ll refer to as the NAS Sherry Wood below). This session took place in the same setting but without any other whiskies. I was keen to get a second opinion and decided to invite Michael Ries of the Los Angeles Whisk(e)y Society & Southern California Whisky Club, who was in Tokyo on holiday at the time, to join me. The third session (for confirmation purposes) was a solo session again. It focused on the old 12yo and its replacement, the new NAS, and took place earlier today. 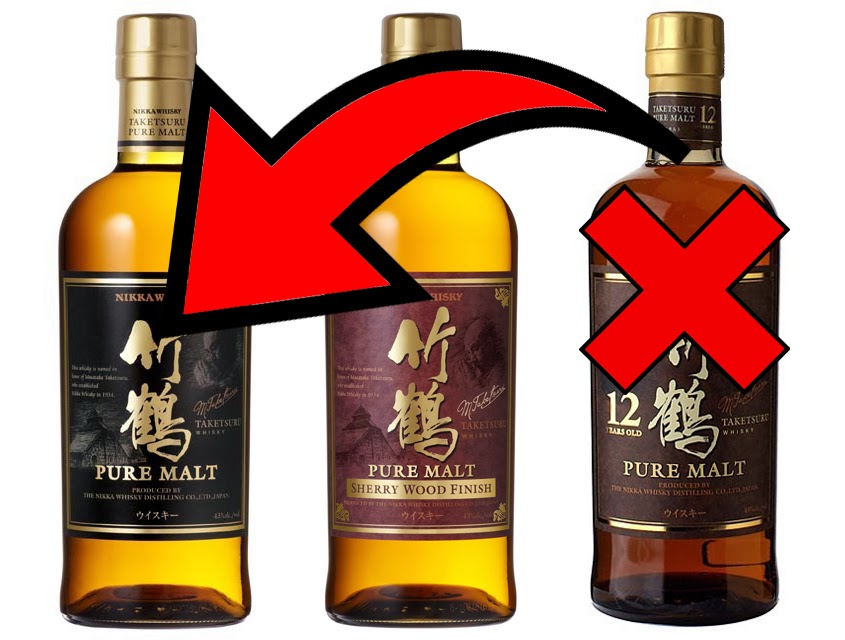 Before continuing, I want to stress that all of the above was done 100% blind: someone else prepared the drams and the lights were dimmed (to avoid taking cues from the colour of the whiskies) so there really was nothing in the way of prior knowledge or pre-conceived ideas to influence the evaluation of the whiskies. This was very important to me, especially for the 2nd and 3rd session, since the point there was to see how the new NAS Taketsuru measured up against the old 12yo and how it fit in with the rest of the range. It’s easy to be skeptical about no-age statements – especially when they’re replacements for whiskies that carry an age-statement – but I wanted to give these newcomers a completely level playing field. I guess I was hoping, deep down, the underdogs would come out on top – probably, partly, to refute my personal skepticism about the whole NAS phenomenon.

At the first session, I scored loads of Japanese whiskies (covering the entire spectrum from blends to single casks, from malt to grain whisky, from ultra-young to old-and-forbiddingly-expensive) but looking at the scores for the 4 Taketsurus among them, the following ranking emerged:

So much for the ‘age doesn’t matter’ argument…. well, just talking about the Taketsuru range, obviously. 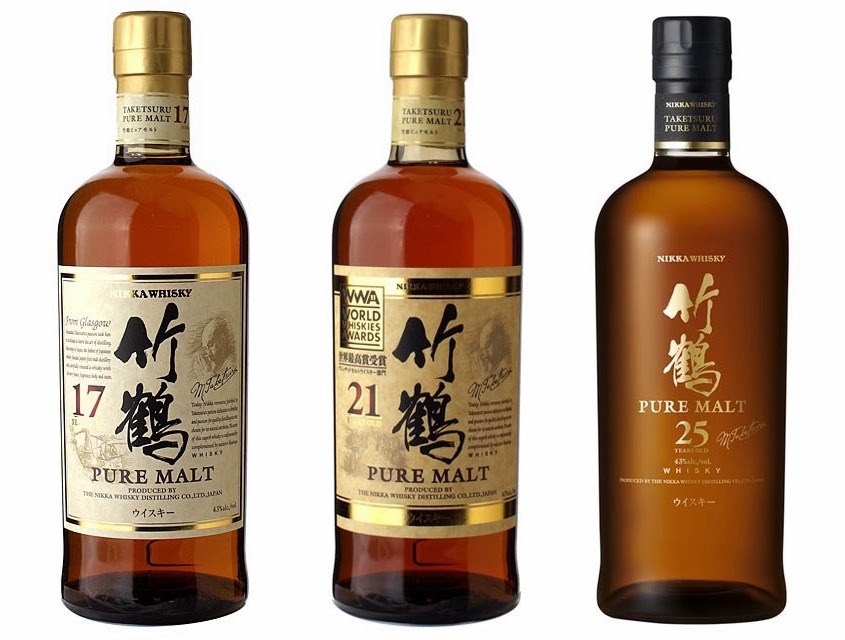 The second session, 10 months later, confirmed the preference expressed by the ranking above but there was a surprise (or two, depending on what one hoped to find). While one of the newcomers came in last, the other came in second place. What? A NAS ‘better’ than the 12yo, 17yo and 21yo (subjectively better, that is – this is all just opinion, of course)… Surely not? Well, yes but unfortunately, the dark horse wasn’t the permanent NAS but the limited sherry-finished edition. The ranking, after the second session was:

The third session – and actually, many other informal comparisons of the new NAS and the old 12yo over the past couple of weeks – confirmed my feeling that the replacement (i.e. the NAS) isn’t of the same quality as the one that it’s kicking out (the 12yo). The NAS is deceptive on the nose – with more fruit and more sweetness – to the point where it may lead you to think it’s actually an improvement on the old 12yo, but it’s in the mouth that it reveals its weaknesses. In spite of being bottled at 43%abv (unlike the 12yo which is bottled at 40%abv), the NAS lacks the roundness, the balance and the depth of the 12yo. On the palate, the NAS also reveals the presence of younger component malts. My guess is that – if forced to reveal its age – the NAS would be an 8yo, possibly even younger. The irony is that the pricing is almost identical – in fact, at my local supermarket the 12yo is priced a few hundred yen lower than what you would pay for the new NAS in many places. Time to stock up on the 12yo… before it’s too late.

The big question at the end of the second session was: how can a sherry-finished version of a NAS that’s not exactly stellar beat expressions such as the 21yo and 17yo which – between them – have won ‘Best Blended Malt in the World’ five times at the World Whiskies Awards? I’m not sure what the answer to that one might be… Is the limited edition NAS Sherry Wood really the same NAS (albeit finished) or was there a different recipe involved? If it is the same, it must have benefitted considerably from the extra marrying period in sherry wood. Whatever the case, the Nikka people must have done something special because the NAS Sherry Wood is a truly spectacular addition to the Taketsuru range. Except, it’s not really an addition because it’s already long gone – all 2,900 bottles sold out in a flash and your only chances of getting hold of a bottle (which was priced very reasonably at around 3,500 yen) are on the auction circuit now.

So what are the conclusions?

1. Age does seem to matter – in this case – and the 25yo Taketsuru still stands out as the best in the range, although it’s hardly the best in terms of value-for-money as a bottle will set you back around 50,000 yen.

2. Dropping the age-statement on an entry-level expression is never an ‘innocent’ move… In the Taketsuru-case, various other things seem to have been dropped in the process, too (age of component whiskies, overall quality). Not the price, though.

3. The NAS Sherry Wood is a mystery… and a beautiful one. And it’s beautiful, also, because it reminds us that, at the end of the day, there are no clear rules, there is no simple logic when it comes to understanding what makes a whisky superb … and that’s reassuring.
Posted at 12:04 AM

Thank you for conducting this experiment! It's really interesting that the NAS Sherry could outclass the award winning 21 and 17. Goes to show that just because distilleries are moving towards NAS, it's not always a bad thing.

One expression that I have not seen a review of is the 17yo NCF 46% from last year.
I bought 2 bottles and have nearly finished one!
It is very easy to drink & is a whisky that I particularly like.
It's like a concentrated, stylish essence of the standard 17yo.

I tried the 17yo NCF at a bar in Osaka (actually, The Court - a Nikka ambassador) and liked it very much, too. But the environment wasn't conducive to taking detailed notes. I was just there to enjoy a couple of drams and talk with the people. I do my all my 'analytical' tasting in my 'neutral' studio at home.

Stefan, how many bottles of taketsuru 25 have been bottled?