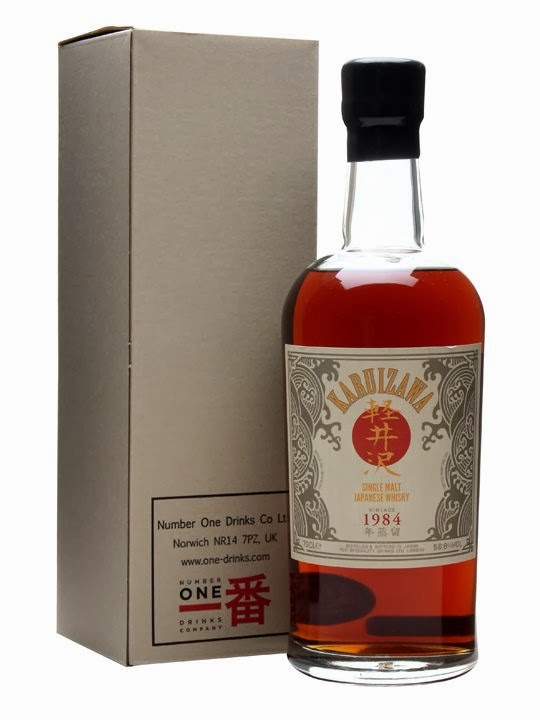 With demand for Karuizawa single casks at an all-time high, the people at The Whisky Exchange wanted to try and distribute the few hundred bottles that cask #3663 had yielded in a different way – that is to say, not on a first-click, first-served basis. They followed our example (check out our 2nd ‘Ghost’ release) and decided to run a lottery. People had one week to register – that was last week – and the lucky winners will be contacted from today. As someone said, tongue-in-cheek, “now you have to win the lottery in more than one sense to get a Karuizawa”.

On the nose, the initial impressions are: lamb kebab, old armagnac, pu-erh tea, chinsuko cookies, pretzels, molasses syrup and balsamic glaze. The nose really takes you on a trip: one moment you’re in an antique shop, the next moment you’re in the back of a classic Wolseley car… eating smoked salmon quiche (no, that’s not a figure of speech!) with the windows open while someone is driving you through an autumn forest after rain. It really is that suggestive… and narrative! You also get lovely earthy, vegetal notes (beetroot and burdock) and hints of maraschino cherries and Turkish delights. (You can make up your own story line here…) In the background, there’s some teriyaki sauce and a handful of porcinis. The sort of nose that only an old Karuizawa can deliver.

In the mouth, it’s really dynamic – and narrative, again (although the story lines on the palate are a bit different from those suggested by the nose). Following a short, savoury attack, you get a sweet phase (dried prunes, Rokkatei butter sandwiches and Caramella Mokatine, a classic coffee-flavoured caramel candy from Antwerp), followed by a lengthy sour development with loads of beautiful citrus notes (kabosu, yuzu, Seville oranges). A transition on fresh ginger leads to a phase in which slightly bitter notes are foregrounded: kale juice, goya, grapefruit peel… nothing excessive, though – all in good balance. You also get some pepper and spice (cloves, nutmeg, pink pepper, ...). The amazing thing about the palate is that the flavours morph across these phases so that, to give just one example, you get lemon meringue which then becomes yuzu tea which then transforms into candied grapefruit peel which is then dipped in dark chocolate spiced with cloves, nutmeg and red pepper flakes. And that’s just one line running through the palate… (I was tasting this while my son was watching a ‘Crayon Shin-chan’ movie on DVD and there was more happening in my glass than in the movie, which is quite a feat!) The finish is one long, gorgeous sour coda, lush and tingling with spices from the wood.

With water, the nose loses some of its complexity – you get more orangettes, candied lime peel, sour cherry pie and sultanas, but that’s at the expense of the savoury aromas and some of the secondary and tertiary notes.  On the palate, it doesn’t swim all that well, either. Water messes up the interplay of flavours and emphasizes the bitter components a bit too much. This Karuizawa is at its best the way it is – no need for water.

The good folk at TWE have a knack for selecting phenomenal casks and this is no exception: a brilliant, multi-faceted Karuizawa from its “Golden Age”. If you manage to get your hands on a bottle of this, you really have won the lottery, in more than one sense. We’ll review some of the other Karuizawas bottled for TWE very soon. In the meantime, keep your fingers crossed!
Email Post
Labels: Karuizawa The Whisky Exchange TWE

Will said…
Thanks for the review Stefan - greatly appreciated. Out of curiosity, do you know the exact number of bottles TWE released? You had said the Shinanoya sister cask had a yield of 271 so I was wondering if it was a similar number for TWE.
February 12, 2014 at 12:23 PM

Stefan Van Eycken said…
Thanks for your kind words, Will. Nobody seems to know the exact outturn, but apparently about 240 bottles were available for the lottery. That should have made it possible for most interested parties to get a bottle... Why? Well, when we ran our lottery we had a very tight system (which made it almost impossible to enter twice, because the only way to enter was with a name and physical address linked to the credit card that would be used to conclude the purchase if a participant won). We had a few hundred entries - and that was for an extremely rare yet very reasonably priced Karuizawa. With TWE Karuizawa, apparently, there were about 2,000 entries, but (as many will attest) it was easy to enter loads of email addresses on the part of a single interested participant. So, whereas it seems like the whole world is after Karuizawa, it's actually just a few hundred people. Admittedly, those few hundred people are hard-core, but in the hype of it all, it's easy to lose sight of the fact that it is - in fact - a small group of people, compared with other distillery fans.
February 12, 2014 at 8:17 PM

Interesting thought of yours about a possibly quite small number of Karuizawa hardcore fans.

The current (and future) prices of Karuizawa releases make it a very plausible hypothesis.

What would be interesting too - as was discussed last year i.e. with Dramtastic - is to be able to assess whether this hardcore fan base is actually drinking the bottles or just collecting - or maybe even just speculating.

I probably am a part of this hardcore group, and i do drink and love the Karuizawa whisky. But i also buy much more than i can drink for now - with the perspective of the ending of stocks also, so that i secure for myself bottles in a future where Karuizawa will only be a distant memory of whiskies gone - kind of a japanese malt mill maybe :-)

I was not lucky enough to win the Nonjatta Ghost release, but i really wonder what people will do with their bottle. I saw one bottle went directly on auction about a month ago. Do you know of any customers that drank it ? Any tasting comments ?
February 13, 2014 at 5:59 PM