Today, we are thrilled to present the third bottling in our alternative history of whisky making in Japan, aka the ‘Ghost series’. Just like the previous two releases, it’s the sort of whisky you don’t come by every day. In fact, it is an absolute first as far as Japanese whisky is concerned because it was finished in an Italian grappa cask. Just like our previous releases, it comes with a bit of a story – in fact, a few stories.

On one of our trips in the Kansai area of Japan, we came across a special Hanyu that was only available on tap – i.e. from a glass cask in the wall – at a brand-new whisky bar in Kyoto. (Check out this post for further details.) To recap: a little over five years ago, Minoru Nishida (of Bar K6 fame) bottled an extraordinary aged grappa from Paolo Berta (1990 vintage) for his liquor shop Kask. It quickly sold out and became the stuff of legend but, fortunately for us now, Nishida-san had the foresight to check if something could be done with the empty cask. He contacted Ichiro Akuto to see if he would be willing to use the empty grappa cask for the secondary maturation of one of his Hanyu whiskies. To make a long story short, Akuto-san filled the 500-litre botte with whisky from the final vintage of Hanyu (2000) and left it to further mature at Chichibu distillery. Fast forward to late 2013, when plans were starting to take shape for a new bar that would be a SMWS hub in Kansai, Bar Keller. As part of the interior design, two ‘casks’ were mounted in the wall – the cask heads coming out of the wall, as it were – and a cask section was built into the wall separating the entrance from the main area. Nishida-san got part of his grappa-finished Hanyu shipped to Kyoto and filled the glass cask section with it. We happened to arrive in Kyoto a few days after this had been done, tasted it and instantly fell in love with it.
On the way back to the hotel, we just felt we had to try and make part of this cask available to people elsewhere in Japan and abroad – that is to say, to try and bottle part of it. A whisky this stunning deserved – no begged! – to find its way to enthusiasts who don’t have the good fortune to be able to enjoy it straight ‘from the wall’ at Bar Keller in Kyoto. Together with our partners at Malt City and Number One Drinks, we got to work. Nishida-san kindly agreed to let us have 80 odd litres, enough for 120 bottles. And that’s how this 3rd Ghost release came to be. It is available now, while stocks last, limited to 1 bottle per person to give as many people as possible the chance to savour this one-of-a-kind Hanyu. 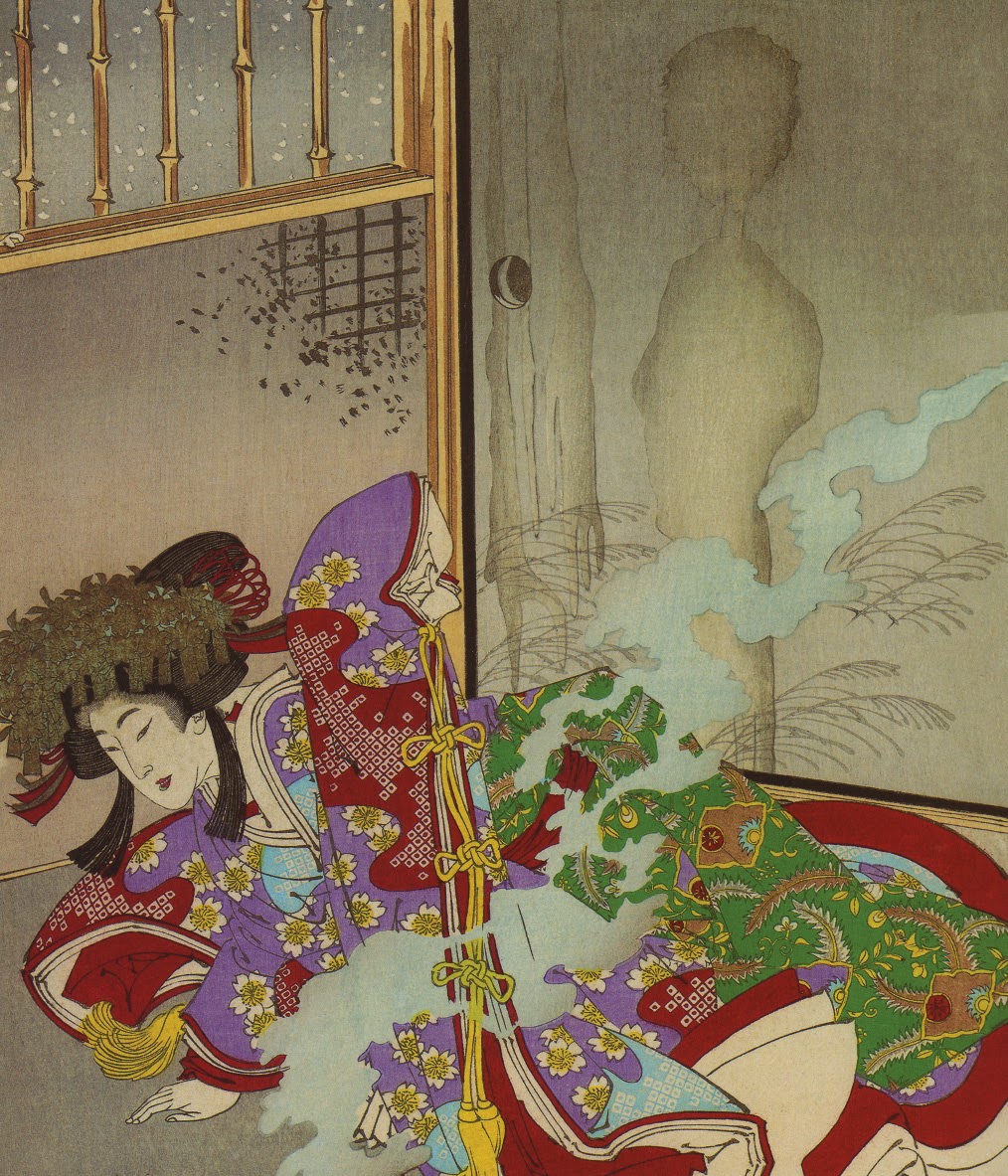 Our ‘Ghost’ series features prints from the great Yoshitoshi’s last series of woodblock prints, ‘New Forms of 36 Ghosts’, and for this particular bottling we knew it had to be ‘Seigen’s Ghost haunts Sakurahime’, because of the Kyoto connection but also because it concludes a sort of mini-trilogy in our ongoing series about the collision between the pleasures of the flesh and the realm of the spiritual, as exemplified in ghost stories involving courtesans and monks.

This is the story behind the print on the label, as told by Yoshitoshi-expert John Stevenson:


“Sakurahime, Cherry-Blossom Princess, was a beautiful and famous courtesan in Kyoto, who had become highly jaded after years of triumph. Seigen was abbot of Kiyomizudera, one of the largest and most powerful temples in the capital. A more unlikely pair to fall violently in love is hard to imagine. Yet they met one day when Sakurahime was visiting the gardens of Kiyomizudera to view its celebrated cherry blossoms. Each had qualities that it was impossible for the other, at the pinnacle of their respective and contrasting careers, to hope to experience. Fascinated by each other, they became inseparable.
The scandal rocked Kyoto. Seigen abandoned his studies and religious duties, and was expelled from his temple. Sakurahime gave up a privileged life to be with him. Before the fire of their desire for each other cooled, Seigen was killed by Sakurahime's outraged servant.
In this print, Seigen's ghost appears in the smoke rising from a sunk fireplace.”

An intense story to go with a unique whisky. As said, it is the only grappa-finished Japanese whisky we are aware of to have ever been made available to the public. That’s not the reason why we chose it, though. As much as we like to find truly unique Japanese whiskies, it’s all about the quality of the liquid – not that one has to worry about that, generally, when Hanyu is involved. It has to be said, though, this is right up there with the best of the best in the Hanyu pantheon. No doubt about it. Stocks of Hanyu are running very low – in the low double digits, we are told – so we are thrilled to be able to offer this to you, dear reader, and reasonably priced as always (13,000 yen plus tax) to thank you for your continued support.

Fans based in and around Tokyo will have the chance to try our 3rd Ghost at a special Hanyu-tasting organized by local whisky club Eastern Faeries on April 20th – i.e. a month from now - at the Beer Horn in Akasaka (4-6pm). We don't expect the bottles to last that long, but save the date if you are curious.

In the meantime, head on over to Malt City to get your very own 3rd Ghost. You won’t regret it.
Email Post
Labels: Bar Keller Grappa Hanyu Nonjatta

Laurens said…
looks like another amazing release, secured myself a bottle and looking forward to it very much!
March 20, 2014 at 5:32 PM

elskling said…
Thanks again for this great ghost series !

Too bad i couldn't any the 2nd ghost, but i will make sure to get this new one.

Anonymous said…
Many many thanks!
And fully appreciate that you allow regulars readers of the blog try it!

Cant wait to receive this.

Stefan Van Eycken said…
It sold out in no time... Thanks for your support. As far as tasting notes. No, this time we made the conscious decision NOT to write tasting notes. We want to hear what our readers find in this whisky. That's more fun for us... So let us know!

Will said…
I can't win with this ghost series...burned by the time difference again. I hope you plan on keeping this series going as long as the blog keeps running in hopes I can get a bottle some day.
March 20, 2014 at 10:09 PM

Jos Jorgensen said…
Can't wait to get this bad boy delivered and opened. Thanks for your passion and hard work in providing us with some special drops. Already looking forward to the 4th release :)
March 21, 2014 at 5:30 AM

Stefan Van Eycken said…
Thanks Jos! We are looking forward to the 4th release, too. In the meantime, enjoy this phenomenal Hanyu.
March 21, 2014 at 8:53 AM

Adrien T. said…
As long as the 4th release has been mentioned, Stefan I guess you can imagine from which distillery I would love it to come, isn't? I gave you quite a few hints during our last trip together! haha ^^
March 24, 2014 at 11:06 AM

Anonymous said…
Hi Stefan,
Stefan here, we had the pleasure of sampling this fine whisky last night with Michael. Really interesting nose and complexity in the finish. Simply a pleasure to try with friends on a nice spring evening. Thank you for your good work. Tasting notes to come...
-Stefan
May 3, 2014 at 12:26 AM