A personal photo journal by Aaron Chan: A Visit to the Chichibu Distillery

It's safe to say that there is nobody in Hong Kong as passionate and knowledgeable about Japanese whisky as Aaron Chan. He owns the multi-award winning Club Qing, where - among other things - he holds regular whisky tastings spotlighting Japanese whiskies. He is also the go-to man in Hong Kong for magazine editors and journalists writing about Japanese whisky. He often visits Japan and, on a recent visit, made the trek out to Chichibu for the first time. This is his account of that visit to Chichibu distillery.

It all began in April 2013 when I attended WhiskyLive in Tokyo and met Akuto-san and Monma-san. Being a Japanese whisky enthusiast, I couldn’t resist expressing my interest in a distillery visit. After a couple of emails back and forth and some logistics planning, a date had been fixed for my dream-come-true tour in January 2014. 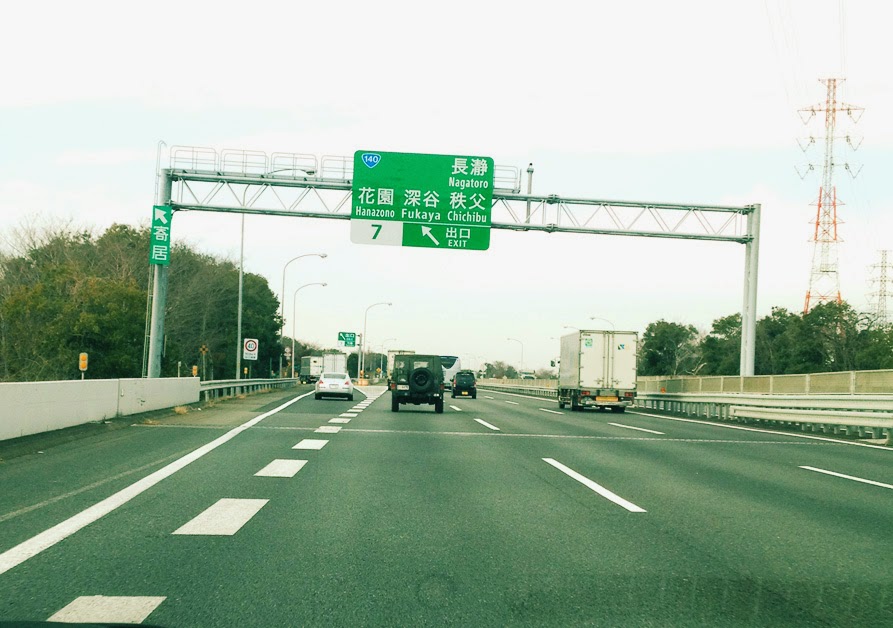 On January 16th, a group of ten whisky enthusiasts from Hong Kong finally set foot in Chichibu, home to Ichiro’s Malt and its acclaimed whiskies. 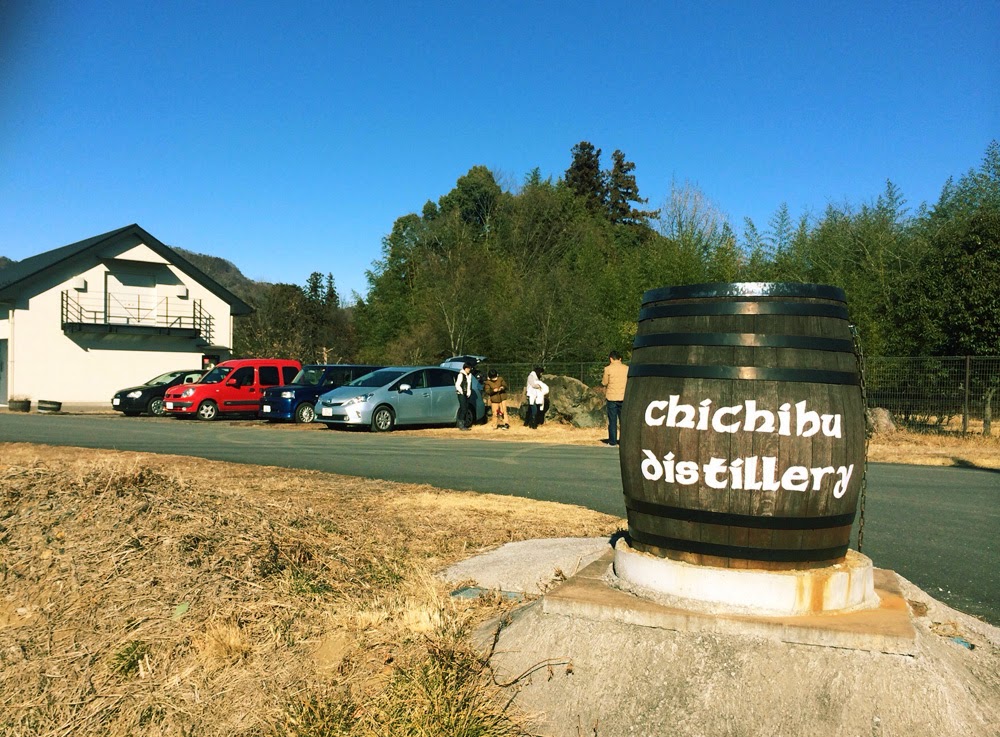 No fancy gate or life-size bronze statues, but a beautifully handcrafted whisky barrel greeted us warmly at the entrance to the distillery. 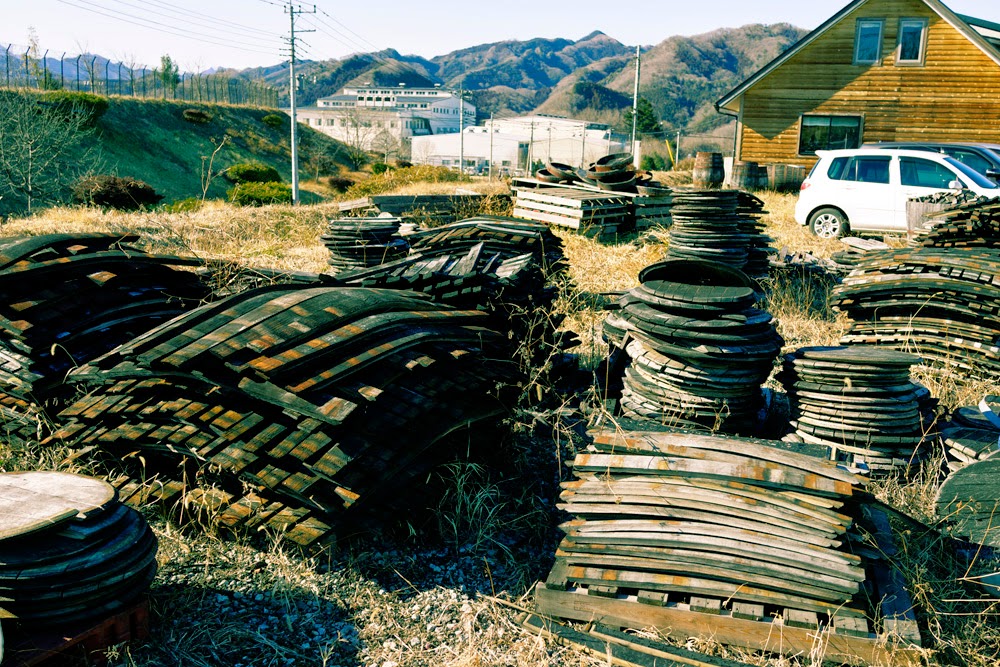 The very first thing that caught our eyes were piles of staves and heads of dissembled retired casks resting neatly across the parking lot. 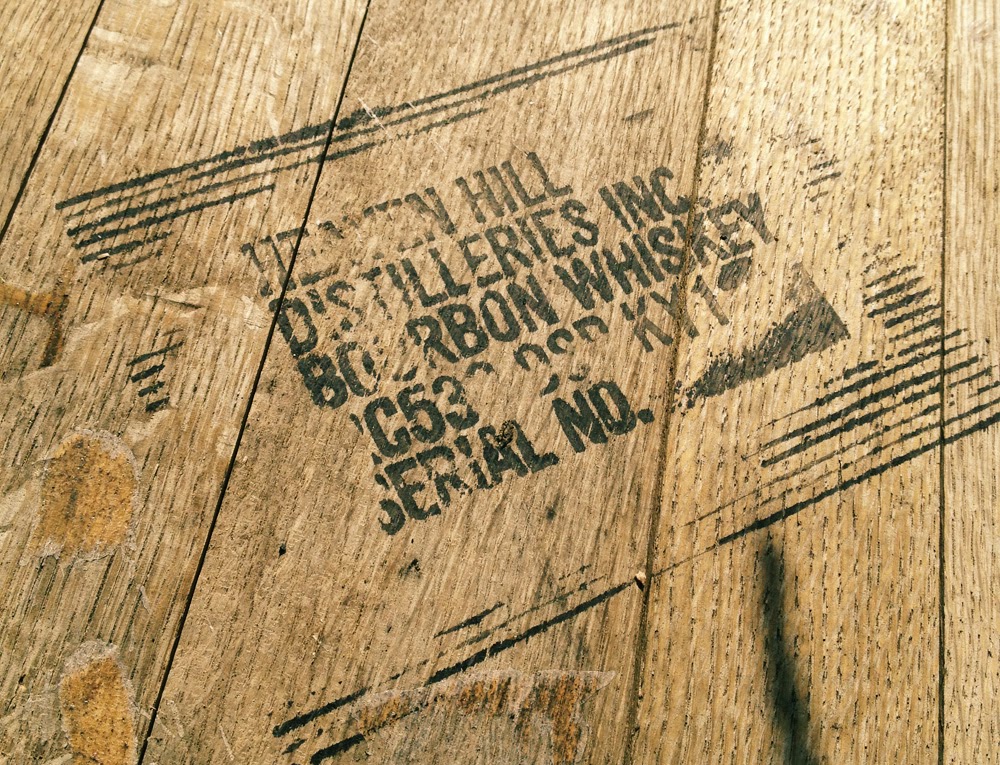 Some of these old casks seem to originate from Heaven Hill Distilleries Inc, the producer of Evan Williams and Elijah Craig Bourbon whiskey. 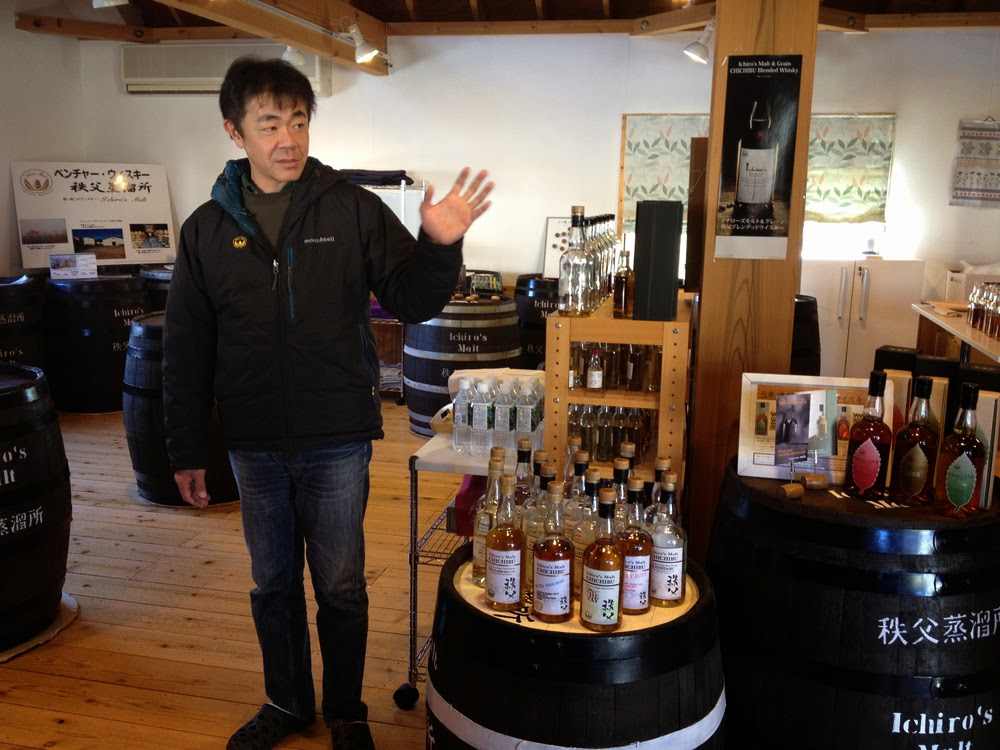 After much anticipation, we were warmly welcomed by Akuto-san … and his popular single malts. 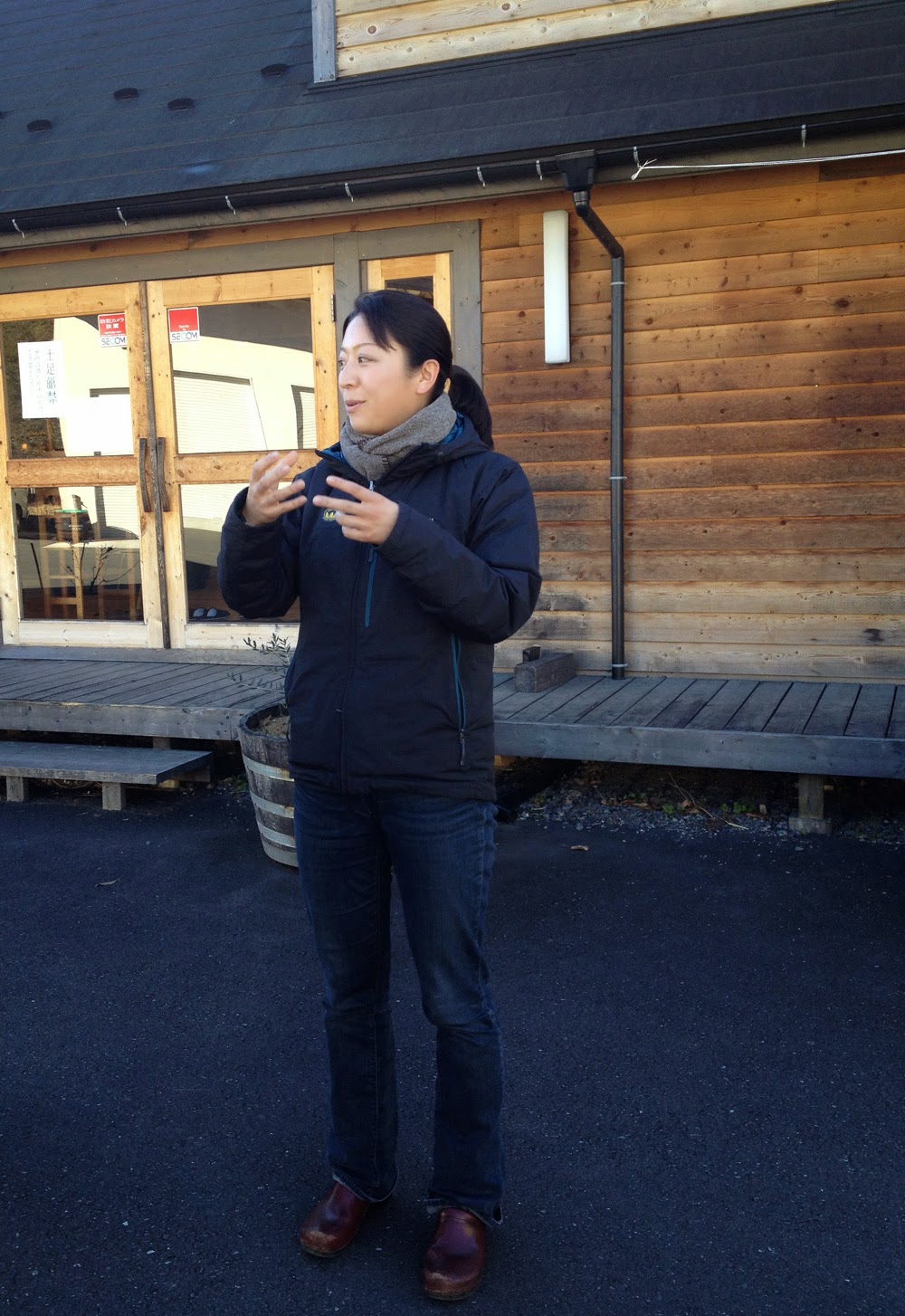 Brand Ambassador Yumi Yoshikawa – who had spent a few years working in the whisky industry in Speyside, Scotland – gave us a brief introduction to Chichibu Distillery and shared with us some of the latest developments there. 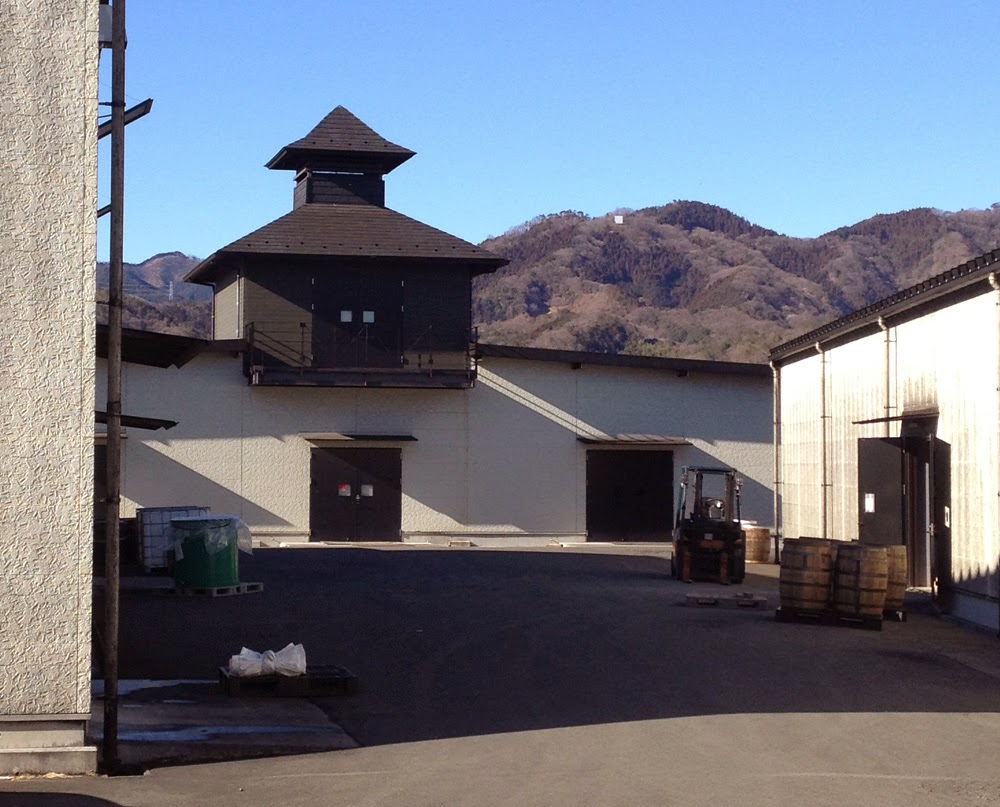 Chichibu will begin using locally produced malt from Saitama prefecture for whisky production starting in the summer of 2014. This new facility is in fact the malt kiln, which will be used for drying malted barley. Very soon, visitors will be able to see smoke coming out from the pagoda. 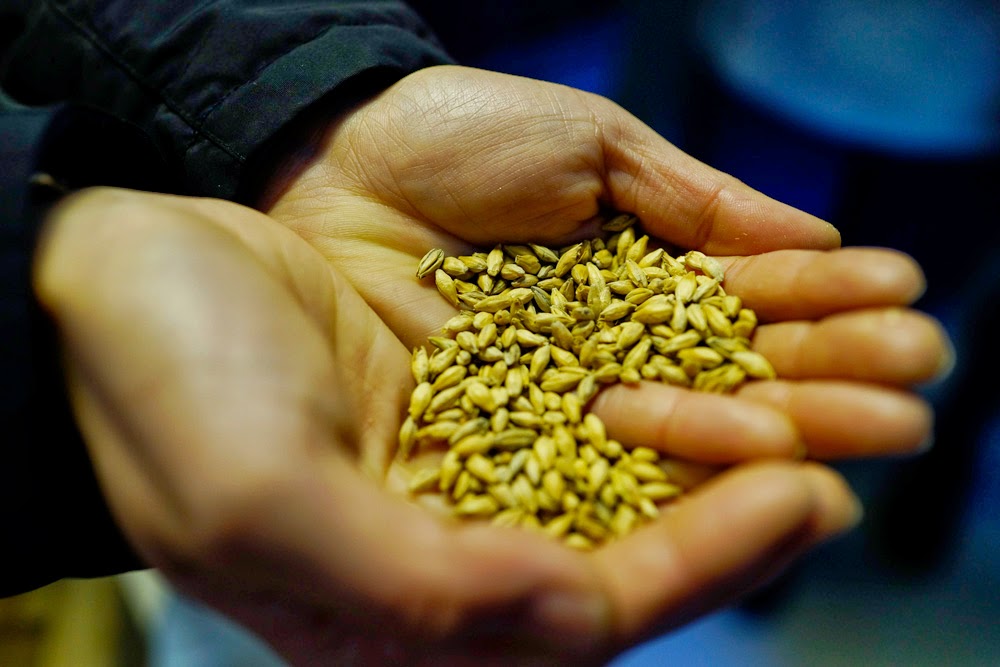 Malted barley, the soul of Chichibu’s whiskies – pretty tasty as a snack, too. 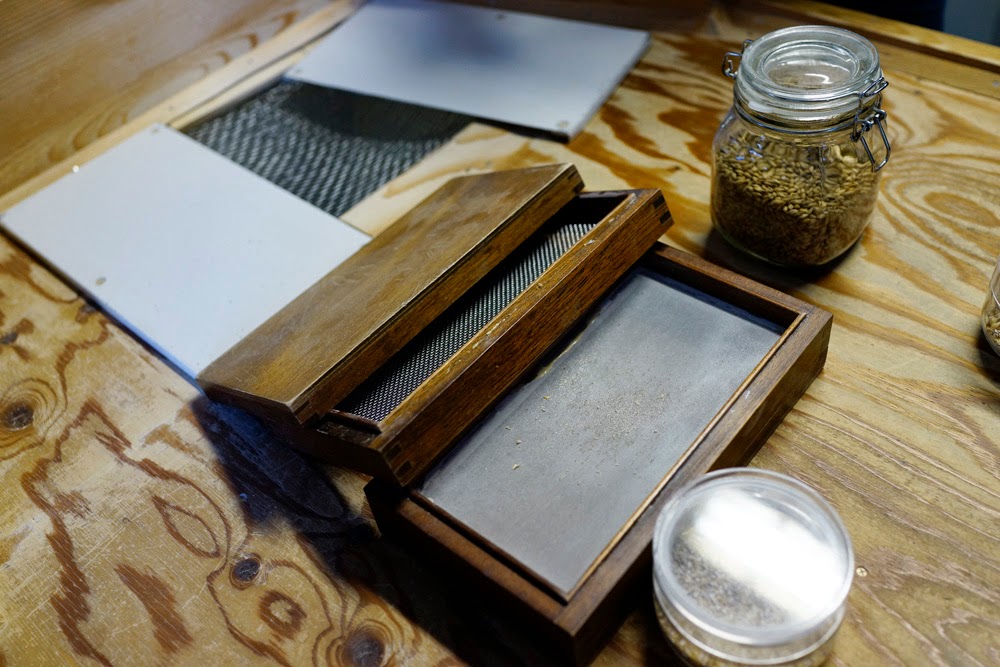 Mesh filters of various widths are used to remove impurities from the malted barley before they are crushed. 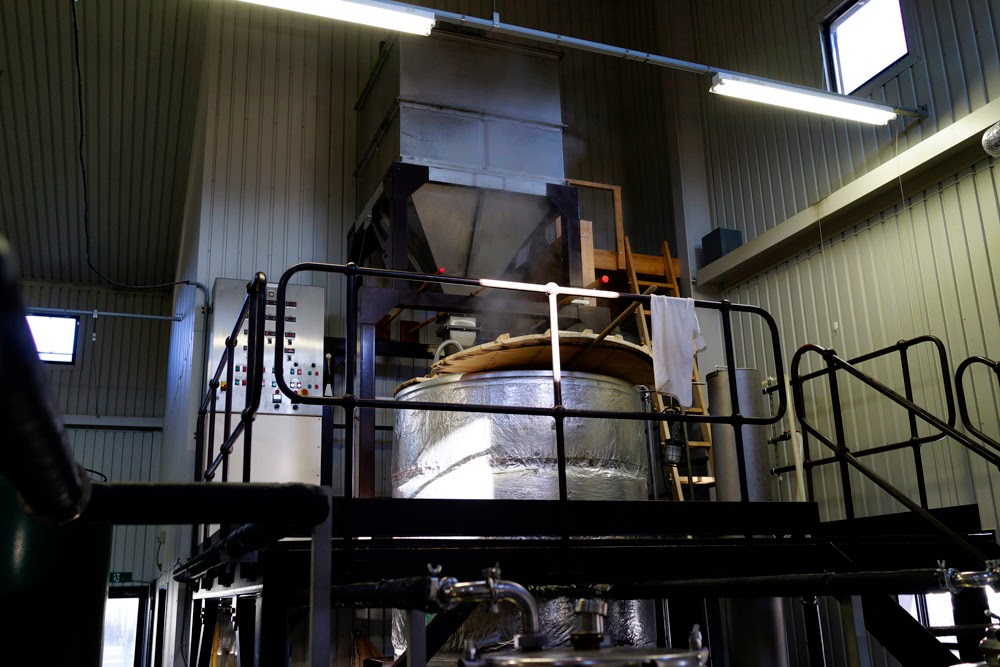 The mash tun is where the starch contained in the barley is turned into sugar.
Those who have joined a distillery tour at one of Suntory or Nikka’s mammoth distilleries will probably agree that, even though pleasant as a day-out, it can be a bit too touristy. From sightseeing to tasting, everything is quite expected.
The Chichibu experience, however, is very different. Probably one of the smallest distilleries in the world, Chichibu is not designed to take visitors regularly. We had to watch our steps carefully when climbing the stairs and moved slowly among the equipment, but that made the whole tour far more adventurous and real. We had the opportunity to see the wash backs from close by, smelling the sweet fragrance aroma that filled the air, and to feel the heat that the workers at the distillery experience every day. Once inside the production facility, we were all deeply impressed by the dedication of the distillery crew. 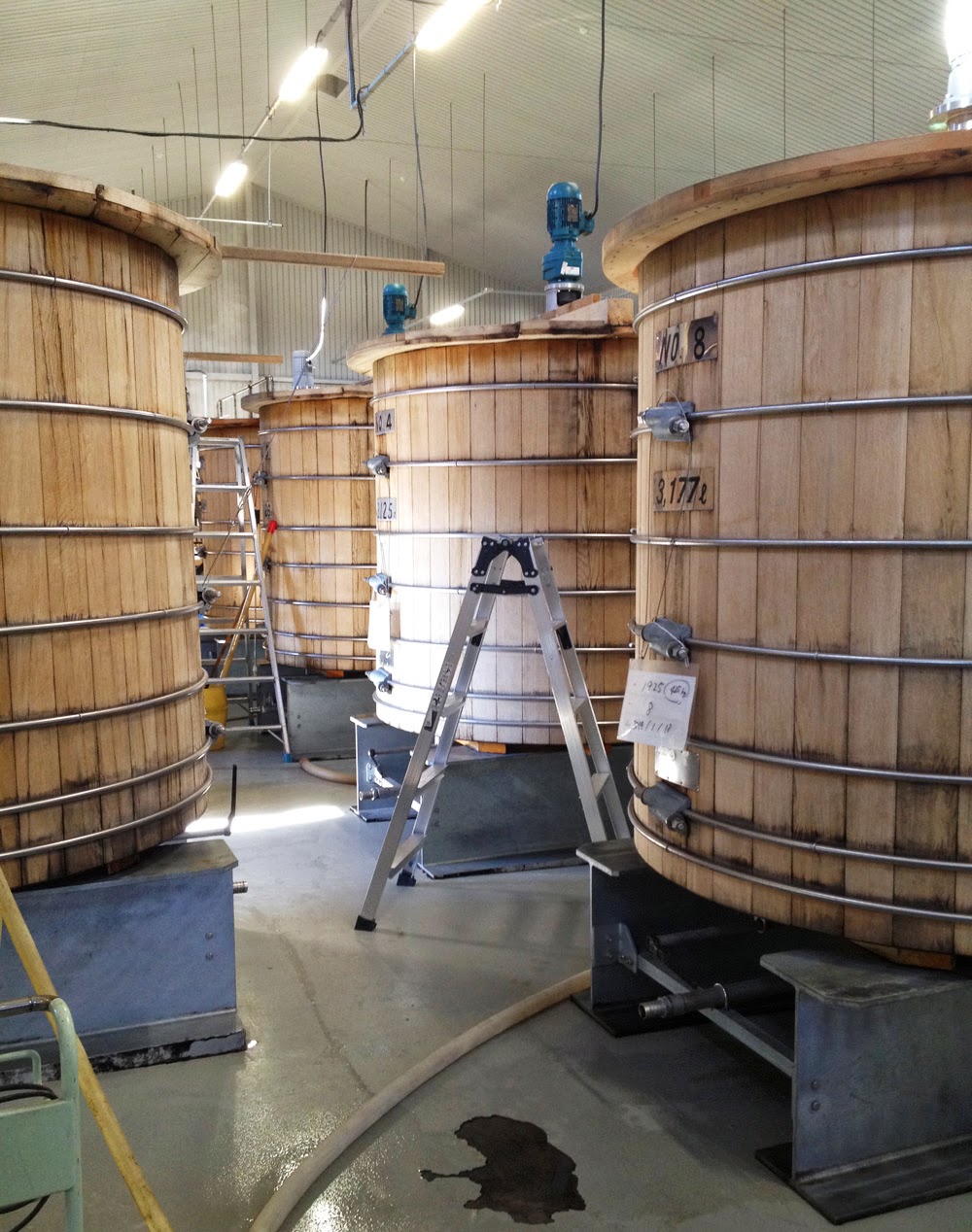 There are 10 wash backs at the distillery, all made of mizunara wood. According to Akuto-san, the advantage of using mizunara over stainless steel is that the yeast bacteria responsible for the fermentation can form better colonies inside the wood. 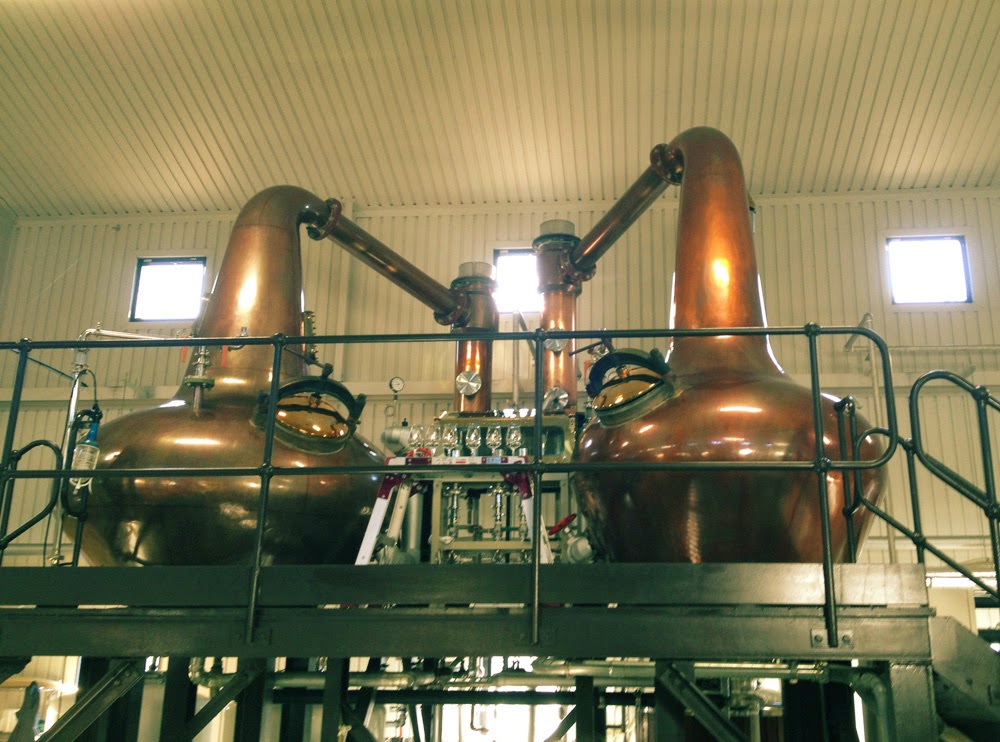 The copper wash still and spirit still, both made by Forsyths in Scotland. 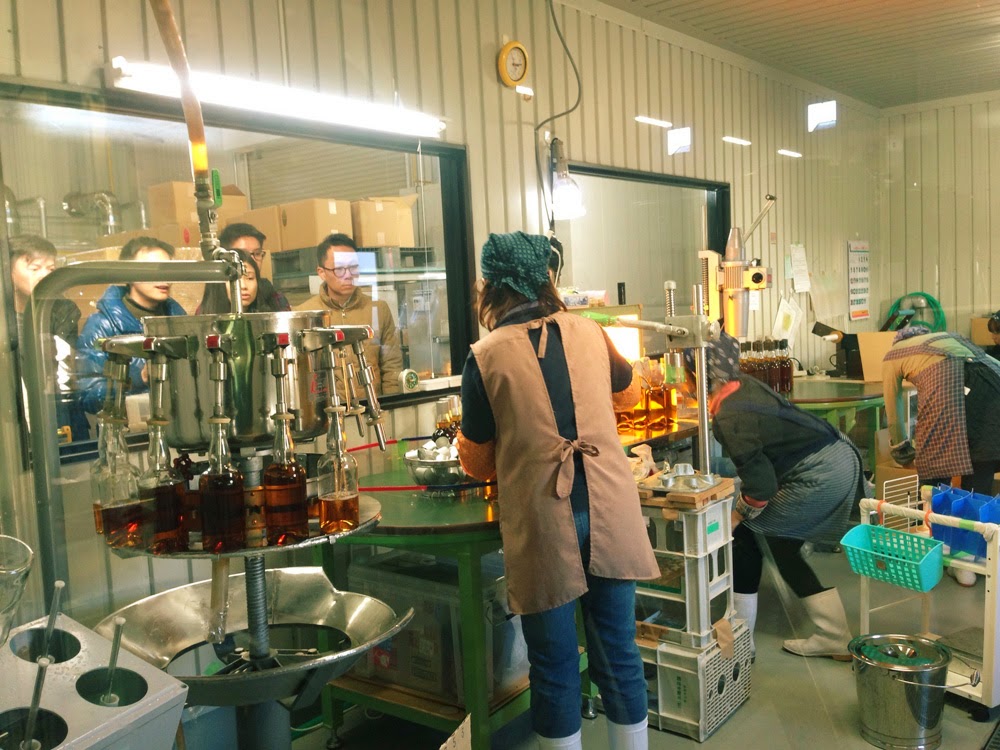 Currently, all Chichibu whiskies are bottled by hand. I wouldn’t mind working there for a month, for free.
[Ed. A new bottling line was installed in early March; more about that in a forthcoming post on Nonjatta.] 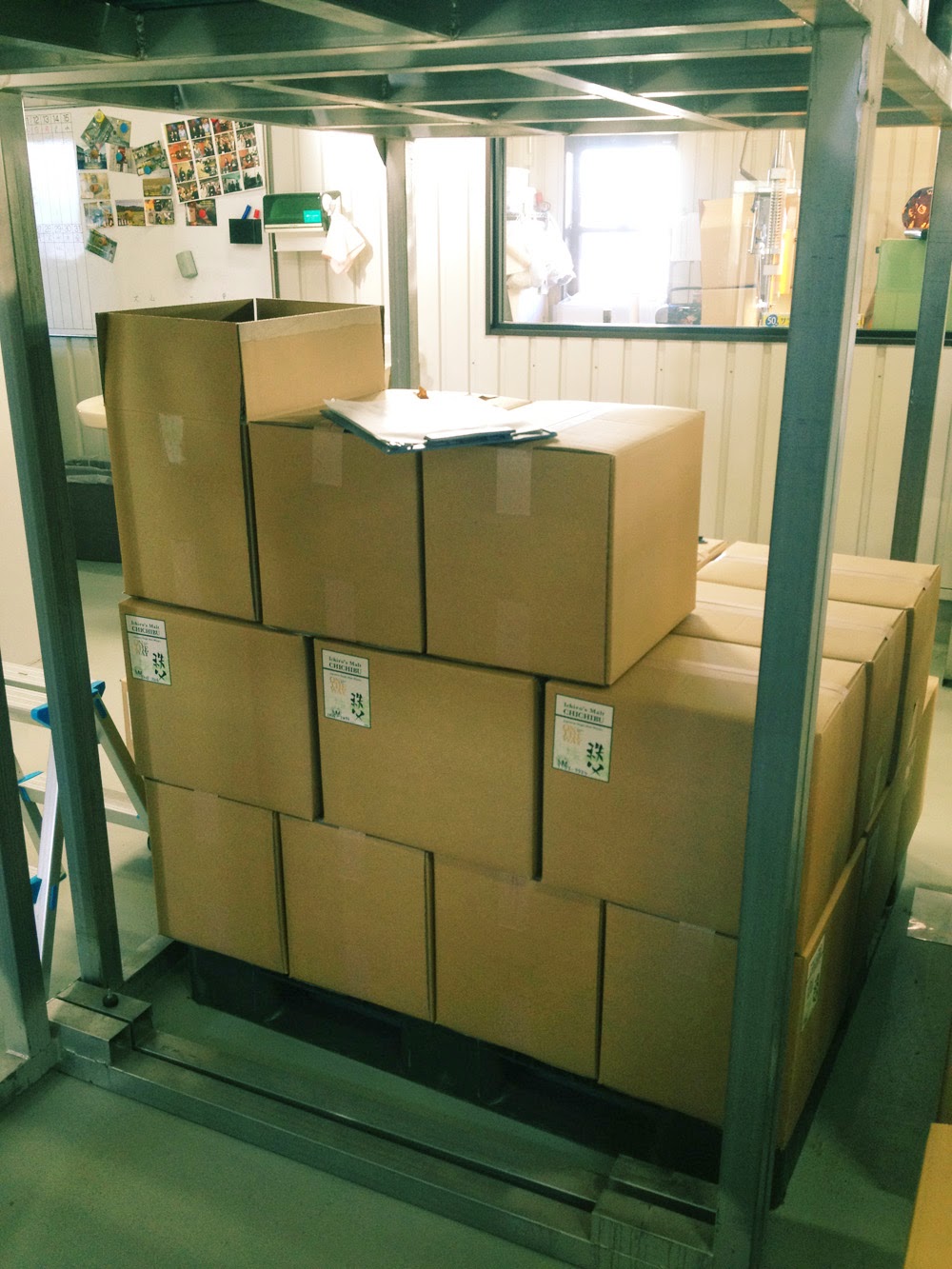 Boxes of Chichibu “On The Way” on their way to retail stores. 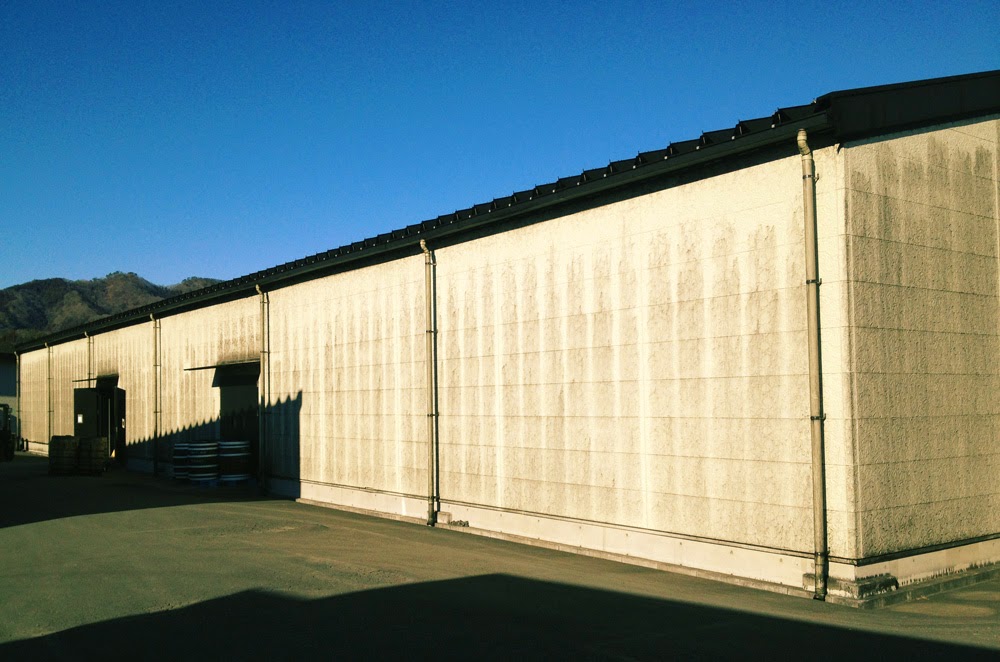 One of the two warehouses at Chichibu where the majority of the Chichibu and some of the Hanyu casks are stored. I couldn’t help wondering what treasures are hidden in the other warehouse…
[Ed. That would be the remaining Karuizawa stock…] 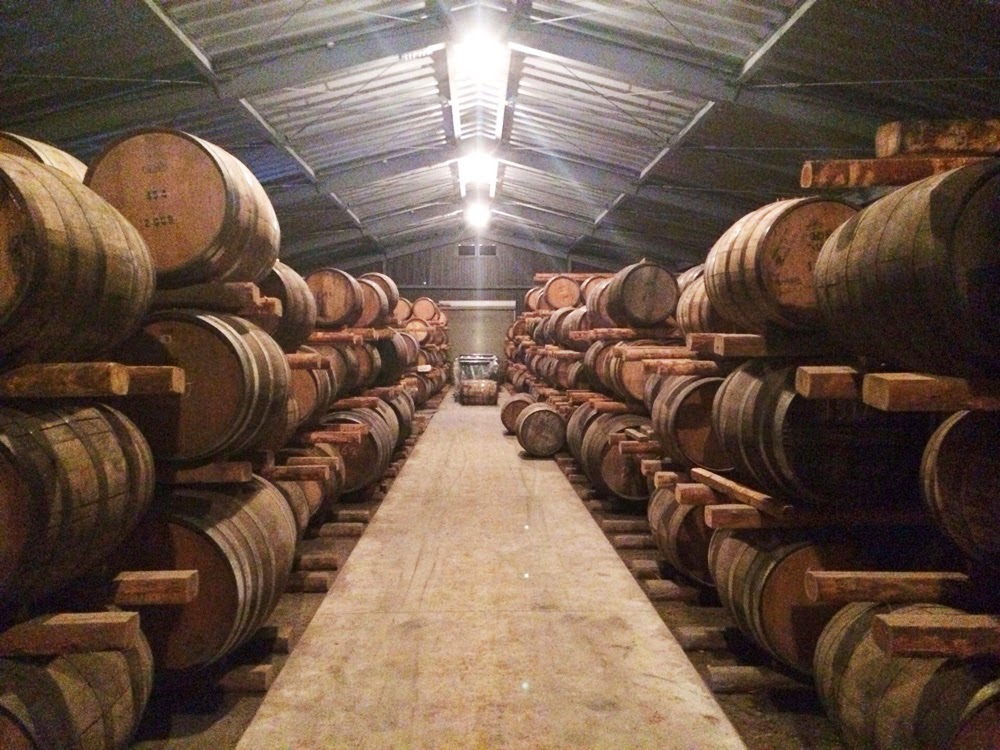 Over a thousand casks of whisky rest here in the warehouse, patiently awaiting the day when they are mature enough to please the palate of Chichibu fans around the world. 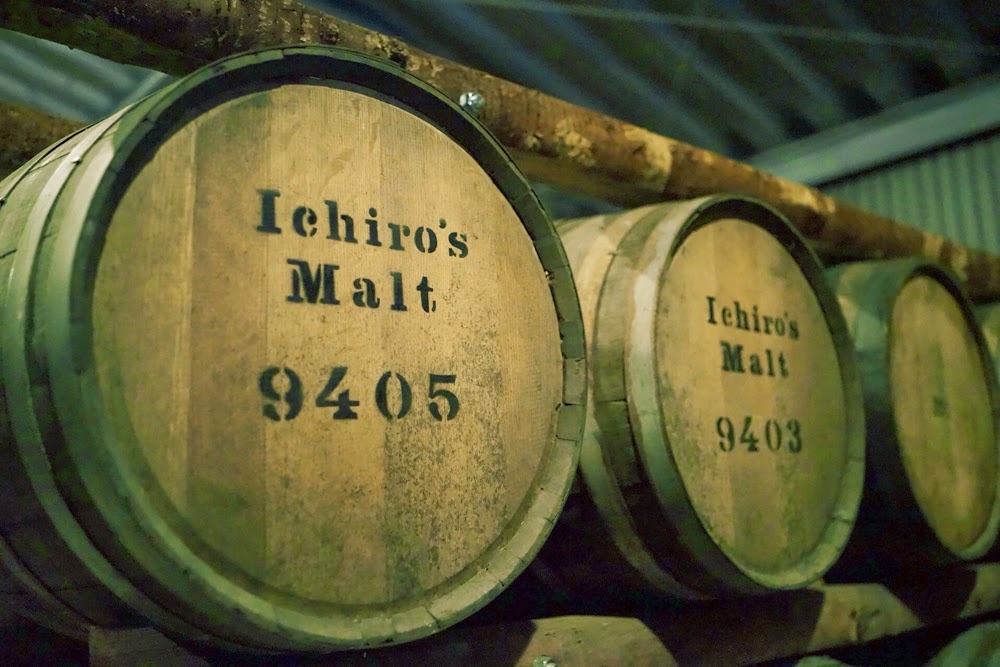 When asked if one of these casks would be the “Joker” of the Card Series, Akuto-san answered “maybe” with a smirk on his face. 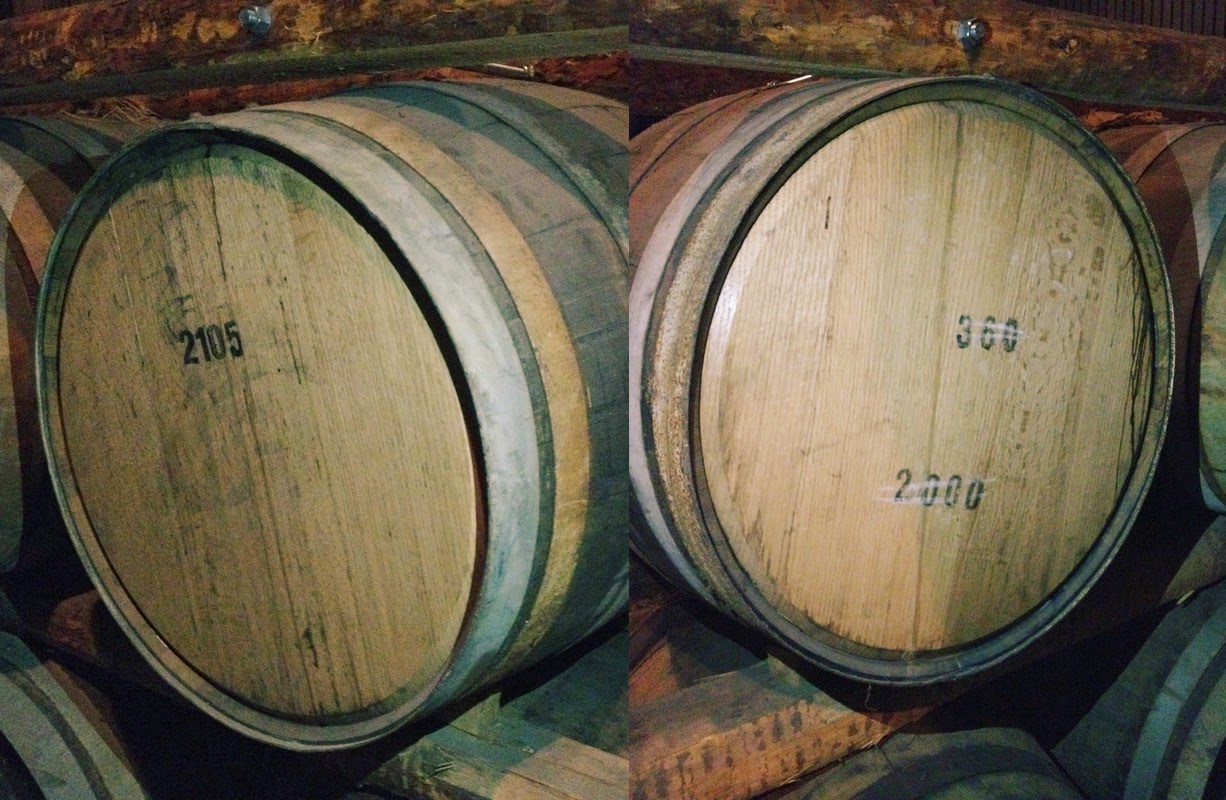 One of my all-time favorites, The Game 3rd Edition (Cask #360), is now re-numbered as Chichibu Cask #2105. Hopefully in the future, it will be released as a single cask of similar quality. 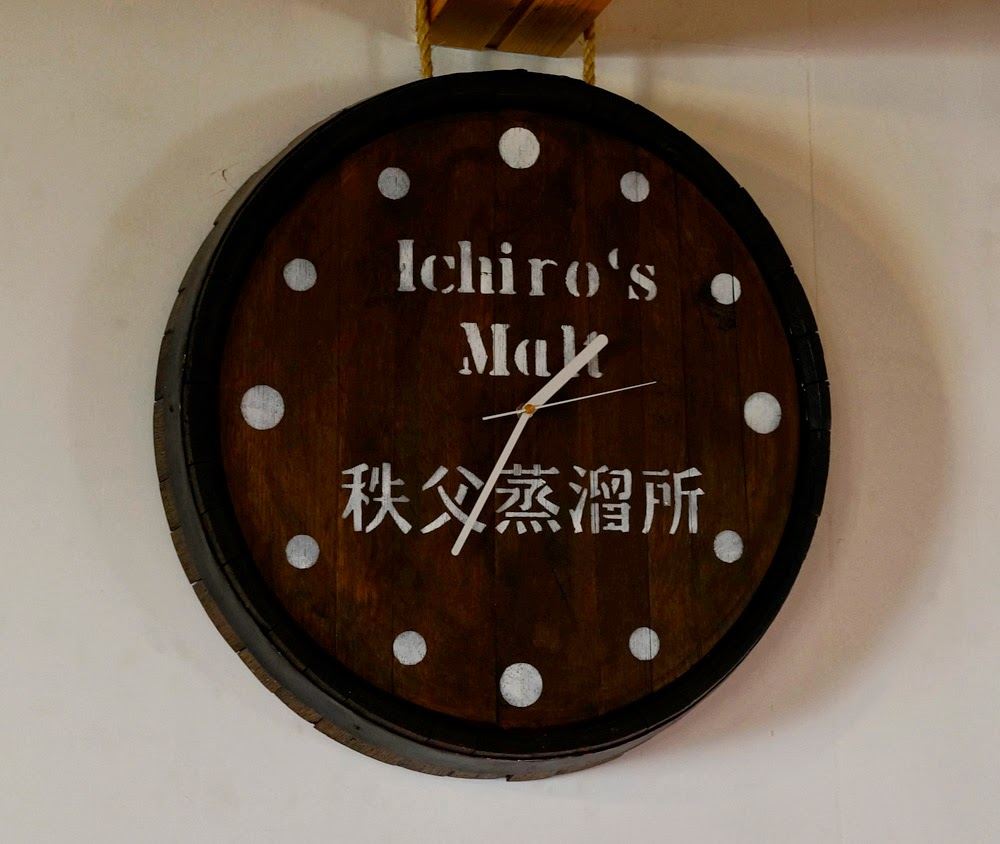 After the tour, our group headed back to the reception where we noticed this iconic clock made from a used cask head. Come to think of it, whisky is all about time, isn’t it? 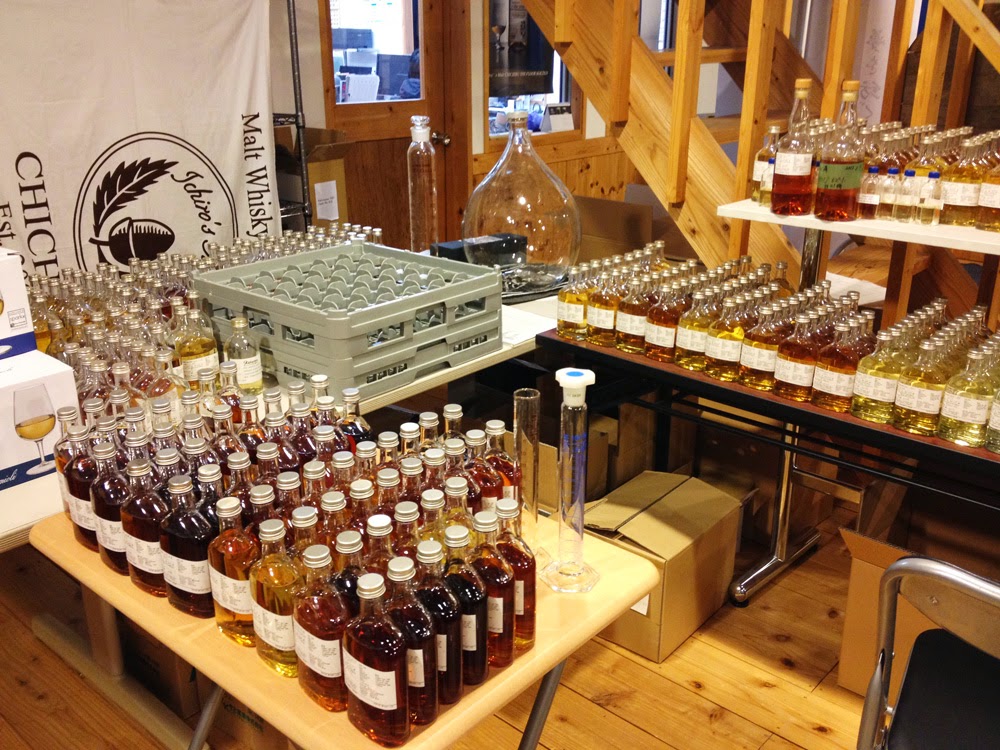 A glimpse of Akuto-san’s workstation, where he samples and blends his masterpieces. The bottles in the picture show a mere 10% of what is there. 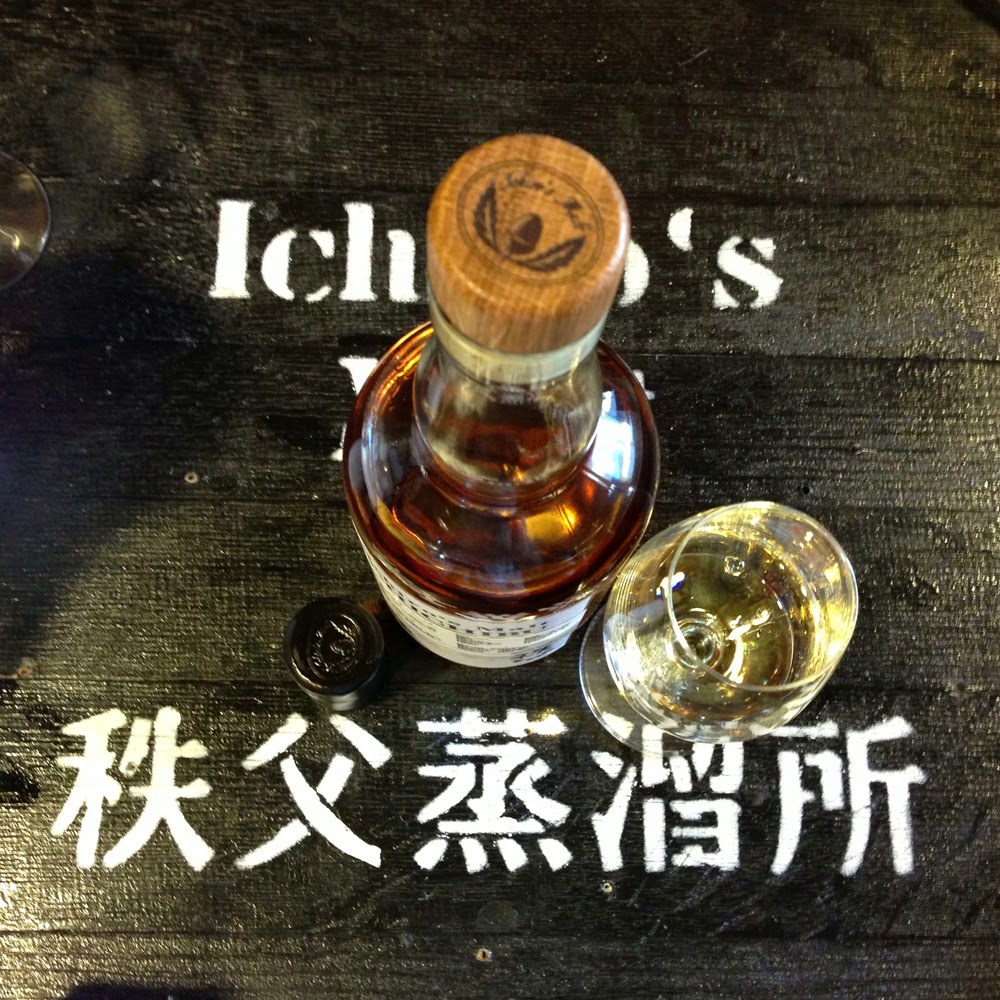 Trying out a private cask owned by the editor of Nonjatta. As expected, it was impressive. 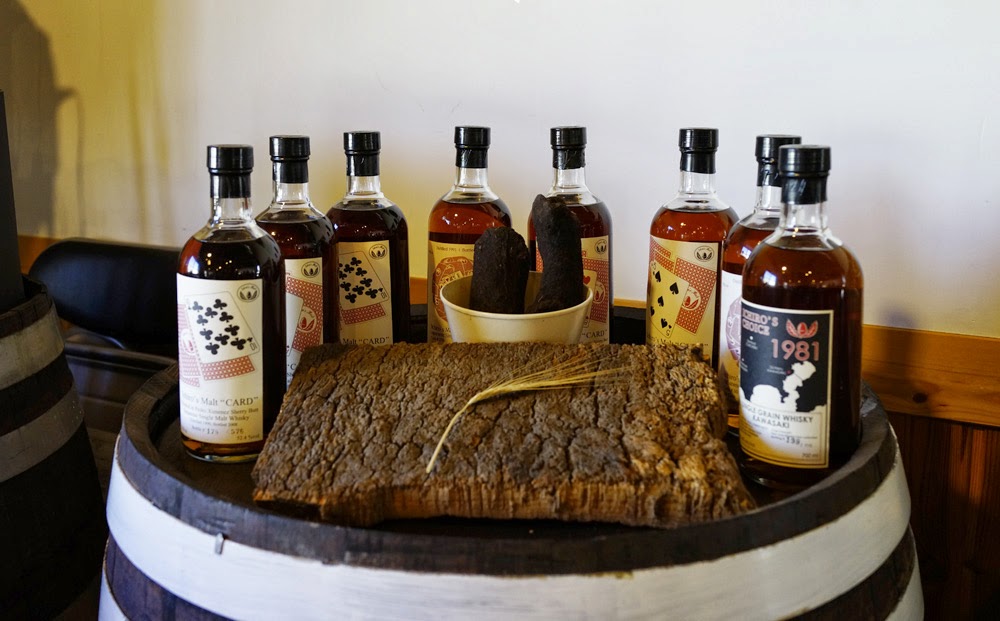 I always wondered how Akuto-san determined which specific card to use for each cask. He told us he usually assigned a high card (A, K, Q, J or 10) for casks that he believed were of superior quality. Interestingly, some of my personal favorites include the Ace of Hearts as well as the Three of Diamonds. 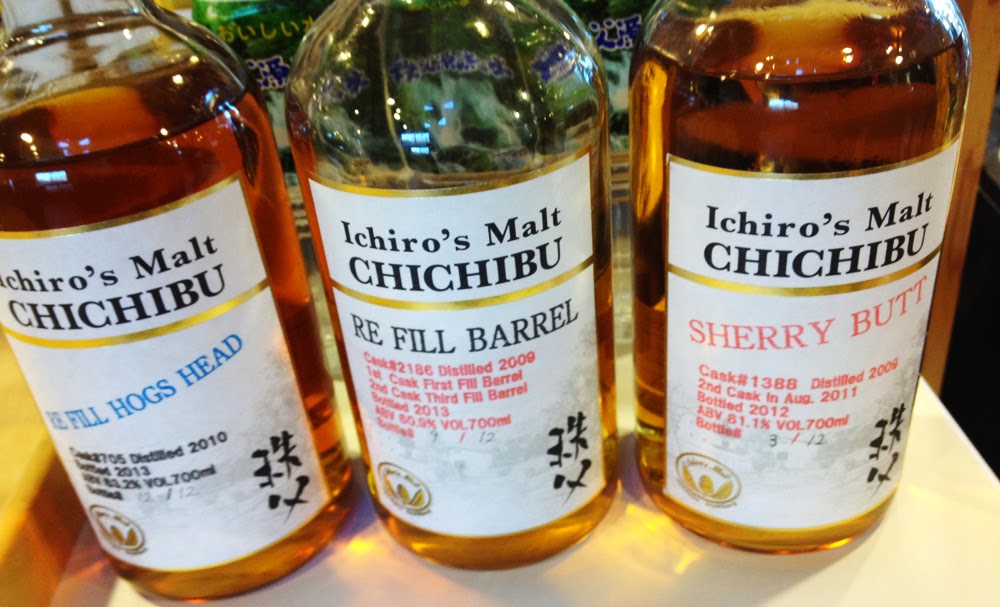 The thing that fascinates us endlessly is Akuto-san’s passion for perfecting his drams. Here are the 3 proto-type bottlings exclusive to distillery visitors. 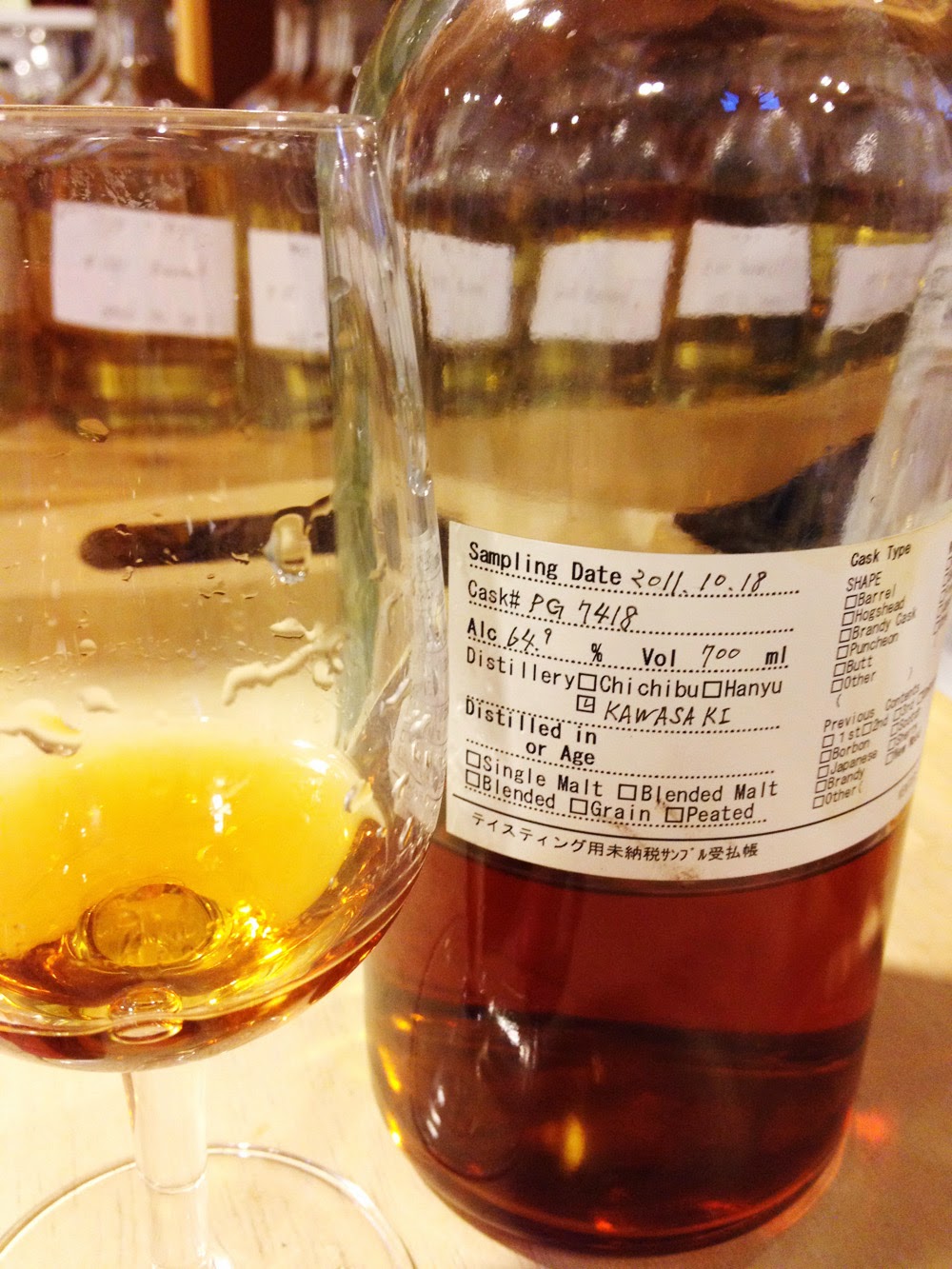 We also had the good fortune to try this truly amazing Kawasaki single grain. Hopefully, it can be bottled as a single cask soon. 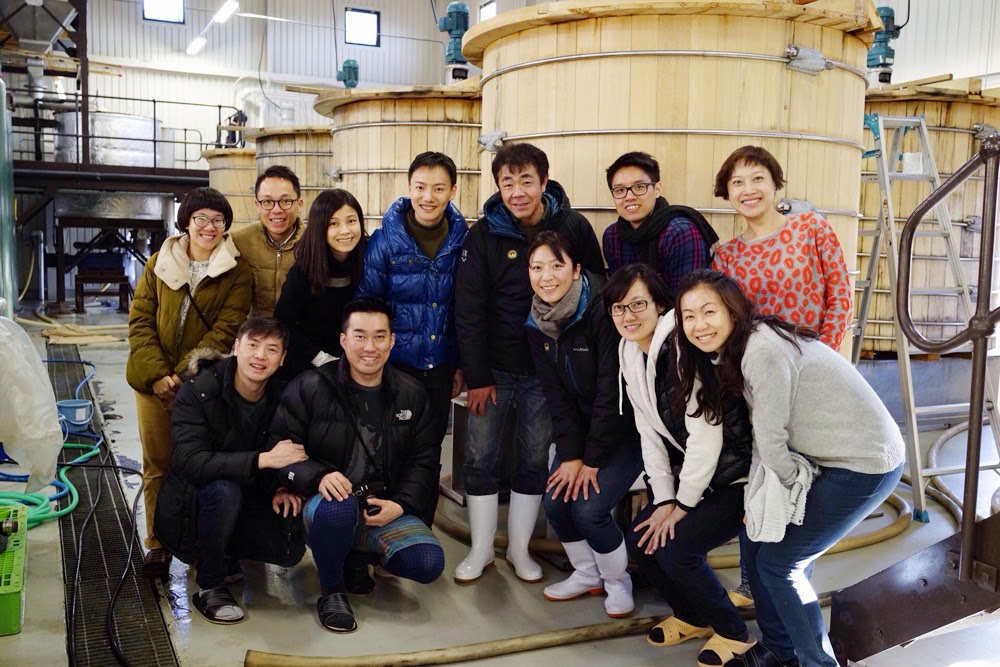 Thank you, Akuto-san and Yumi, for the great hospitality and the wonderful tour.
The overall experience was both informative and sensational. Not only did we get to see every step of crafting an exquisite whisky, but also to feel the passion and dedication of Akuto-san and his team. Building a distillery from scratch is not an easy thing to do, managing it and making good whiskies is an even bigger challenge. Akuto-san continues to inspire whisky fans around the world with his whiskies… and all of this is accomplished with a small team of only 10 people. While the domestic whisky market is still dominated by the two big players, we are thrilled to see an independent distillery is thriving in the hills of Saitama. Ganbatte, Akuto-san!
Email Post
Labels: Chichibu Distilleries Ichiro Ichiro's Blend Ichiro`s Malt Ichiro`s Malt and Grain

Unknown said…
Incredible whisky collection! I noticed a Hanyu Ace of Spades is being currently auctioned at www.whiskyauctioneer.com as well as a Queen of Hearts (Bottle 8)!
May 23, 2015 at 8:29 AM

Anonymous said…
i have 2 bottles of kellerstrass velvet 1879 unopened quart bottles. Does anyone know who collects these and the value? kids-time@sbcglobal.net thank you can send pix if needed.
paul
December 29, 2015 at 8:42 AM