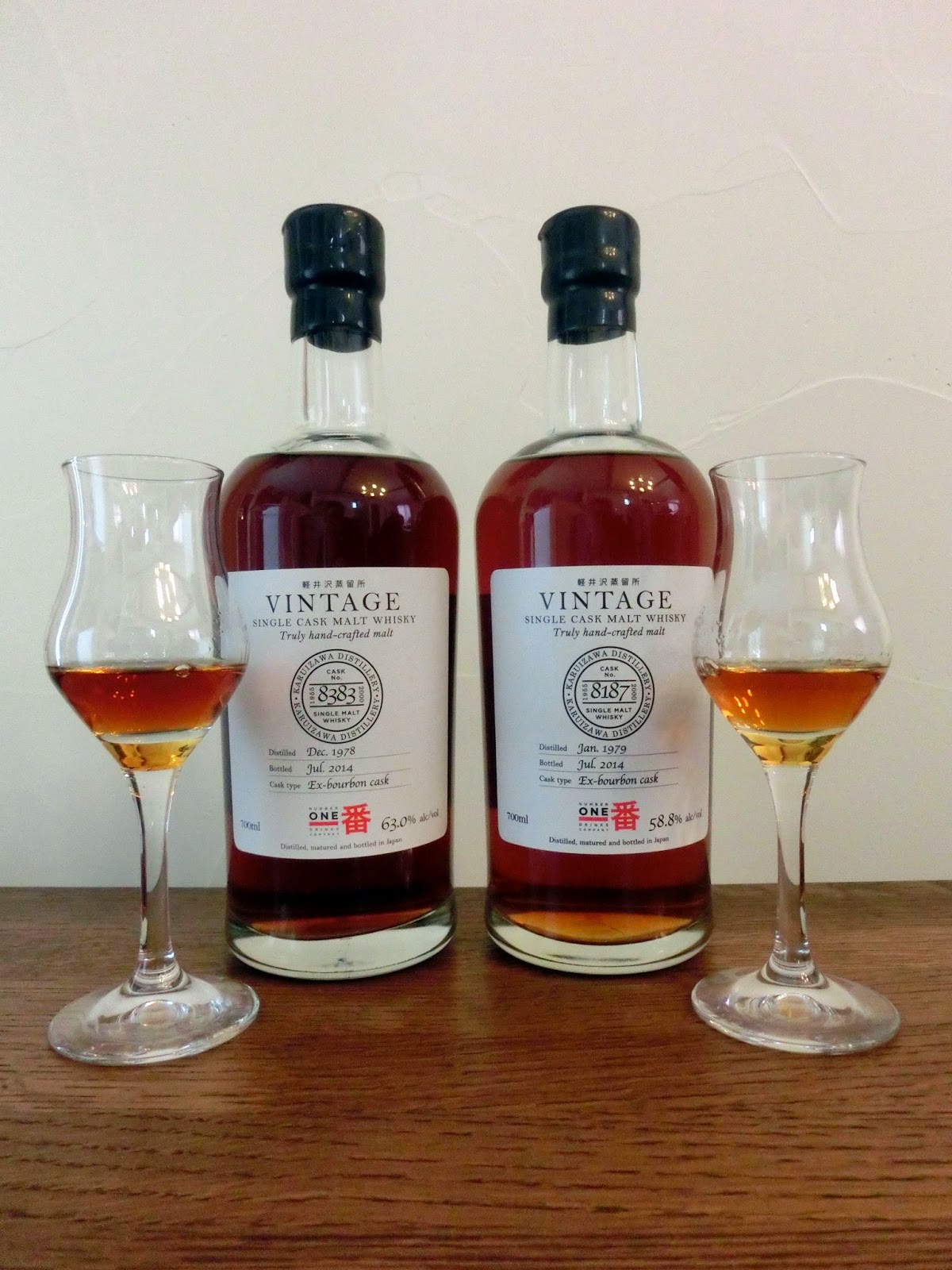 On the nose, the 1978 opens with a variety of pastries (rum baba, pear tart, apricot Danish) accompanied by old rum and armagnac. There’s quite a bit of wood smoke, too (cherry wood) and lots of tiny tertiary notes (earthy, leafy, antiquarian), and – after a while – a hint of eucalyptus. The nose on this is a bit like Hanyu on speed, for want of a better image. The 1979 is markedly lighter on the nose and rather hermetic. There are suggestions of ripe orchard fruits (apple salad drizzled with lemon, Japanese pears), honey-glazed doughnuts and – after half an hour or so – marzipan. Again, it’s quite closed and resistant to analysis. The 1980 is completely different. Here, you’ve got bales of hay, overripe Yubari melon, vanilla pudding, light spices (cardamom, nutmeg), assorted herbs (rosemary, most prominently), root vegetables (burdock) and after about 10 minutes, a waft of a doused bonfire. This is like a midsummer night’s dream! The 1984 is the most lush of the quartet. Sweet and syrupy, it’s instantly seductive: orange-infused maple syrup, blood orange jam, peach melba, maraschino cherries, … and, in the background, suggestions of a humidor, wood polish and porcini. Who can resist this!

We don’t usually go for rankings, but in this case – with the palate and finish, to follow – it’s an interesting little exercise (and one that illustrates why we don’t score whiskies here). So, on the nose, our preference would be:

Moving on to the palate and the finish… The attack on the 1978 is an incredible explosion of fruits (you name them!) with a good dose of white pepper added. It evolves along citrusy and spicy lines, with rhubarb jam forming a bridge to a glorious sudachi note (that signature note of Karuizawa from the 60s and 70s). The finish is long on menthol and selected Moroccan spices, and it’s here that the smoke hinted at by the nose makes a comeback. It’s slightly drying (but not too much) and the retro-olfaction hints at a lovely savoury dimension (a bit like coming home and being greeted by your neighbour’s cooking – in this case, spare ribs with balsamic sauce – which you won’t get to eat, of course)… A fabulous old-school Karuizawa. With water, the nose becomes more aromatic – like having all of the above but in a diva’s dressing room. On the palate, however, it loses its balance, so keep the water where it is.

The 1979 is very creamy – almost chewy – on the palate. We’ve got rhubarb jam, again, but accompanied by manju, kashiwa mochi and assorted berries. It’s slightly tannic (a few more years in wood would have ruined this precarious balance) but the real attraction here is the finish, which is – we’ll just come out and say it – stupendously long and intense. It’s here that this whisky – so hermetic on the nose - reveals itself in its full glory: a myriad of spices, all kinds of pepper, liquorice allsorts, cuberdons, essential oils, preserves, chutneys… what a wild ride. An experience that certainly proves one shouldn’t judge a whisky by its nose (alone). 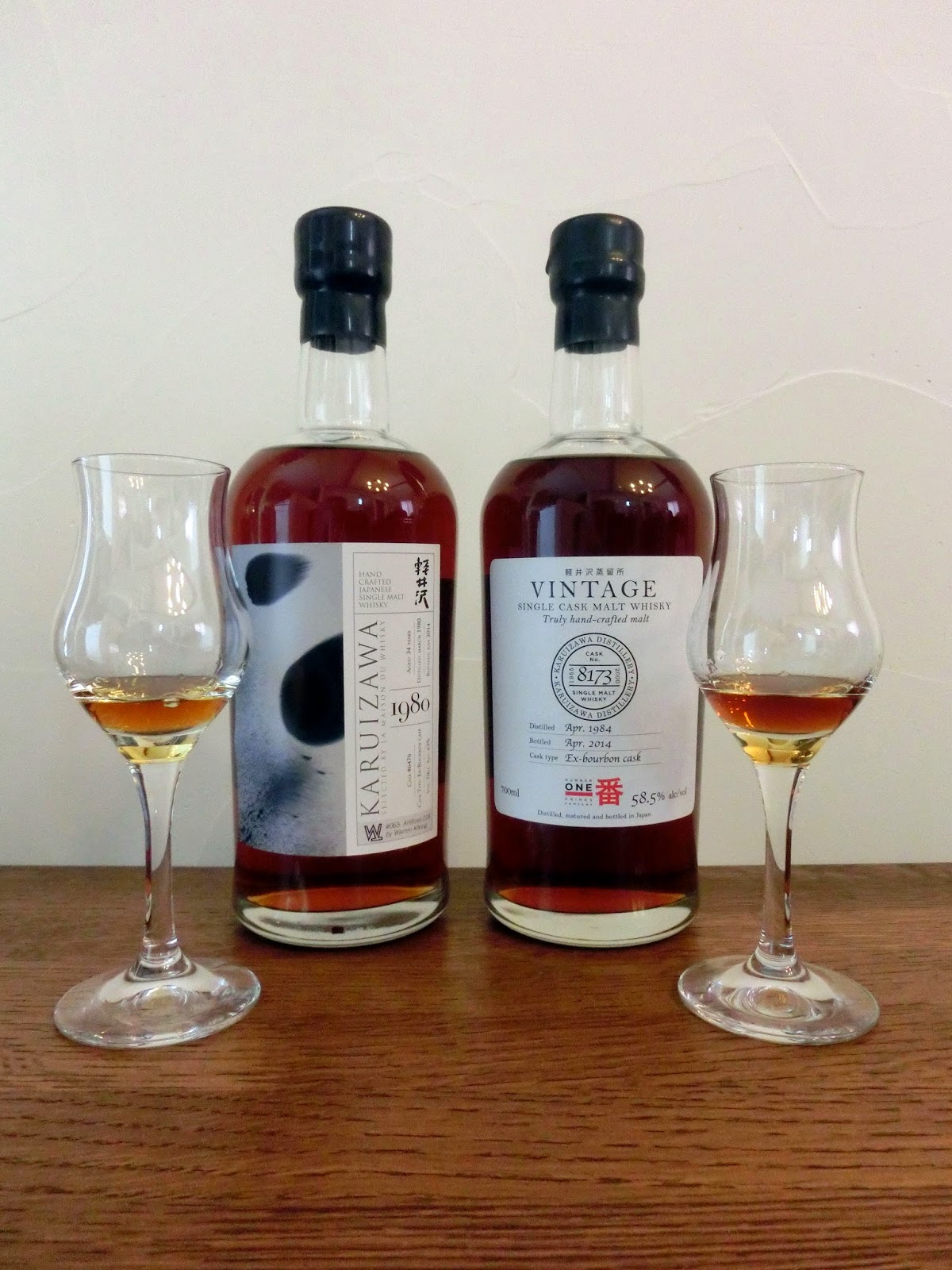 On to the 1980, then. This one has a really lovely attack, perfectly poised between the sour (yuzu) and the bitter (goya). As it moves across the palate, it touches sweeter regions, but it also brings out – and this is something I love in a whisky, albeit in moderation – some great vegetal notes (roasted burdock, grilled bell peppers, lotus root), sprinkled with a bit of white pepper. The finish is quite heavy on wood smoke (hints of bacon and smoked mackerel) with some candied orange peel, roasted almonds and macadamias on the side.

The 1984 is an avalanche of fruits (both fresh and stewed) on the palate: blood oranges leading the proceedings again, but there are also hints of mango, passion fruit, mandarin oranges and candied grapefruit peel. With time – give it half an hour or so – it becomes more citric on the palate, which is nice. You may also pick up a bit of blood sausage. The finish is slightly drying and extends the circus of flavours on the palate. Towards the end, you get that porcini note again (as well as something ever so slightly cardboard-y). Water doesn’t really help – and the same applies to the 1979 and the 1980 – so, again, I would keep it away from the whisky.

For the palate, the ranking would be: 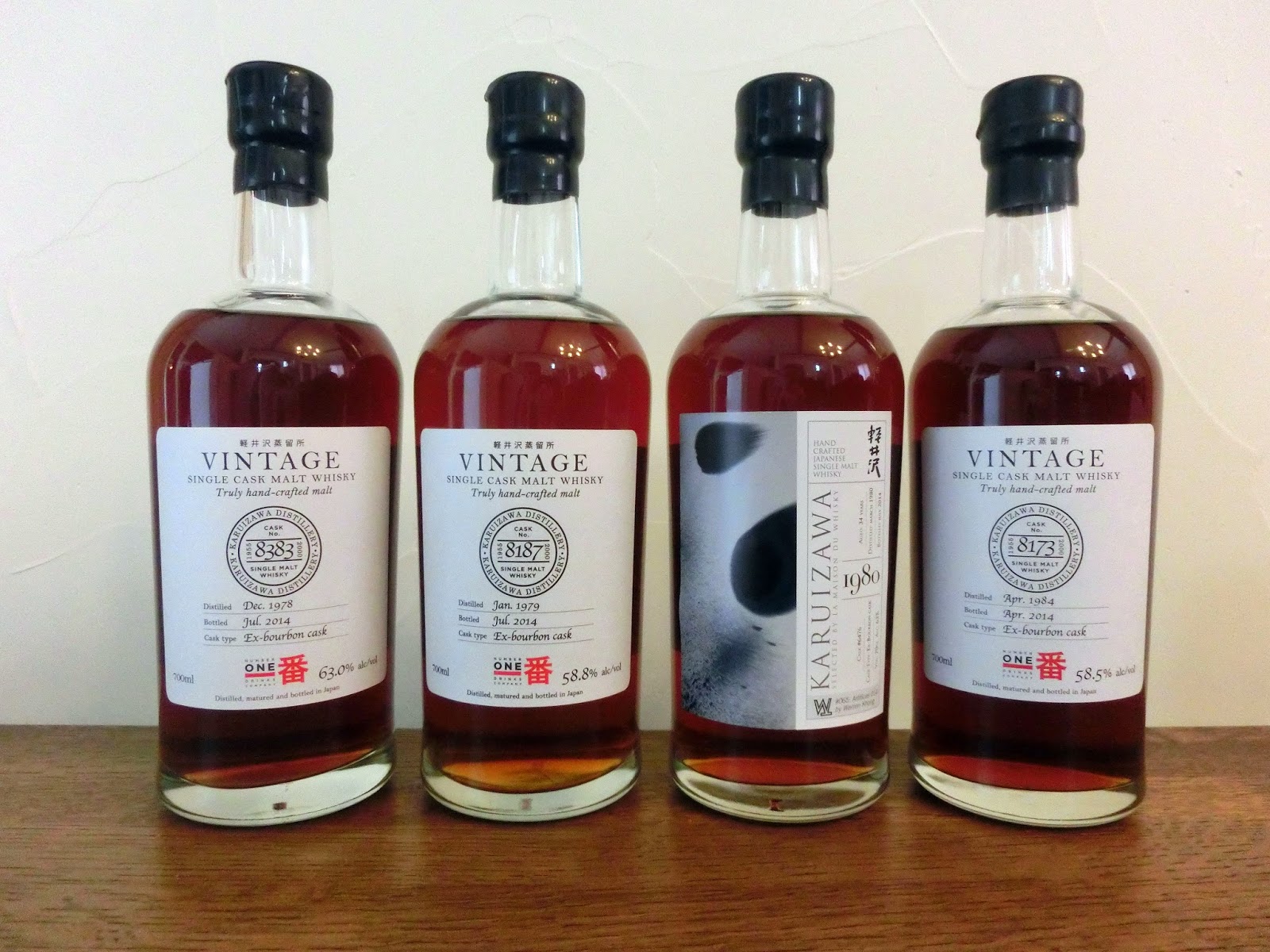 They are all fabulous drams, but our little exercise in ranking the nose, the palate and the finish separately illustrates why scores don’t really tell the whole story. These would all be whiskies that would get 91, 92 or 93 points – depending on who’s doing the scoring and what is valued about them – but they have different strengths and shine in different ways.

Great session you had there. I loved the 1978, but could not (yet) taste the other ones (just spotted a bar around the corner where they have the 1984, i'll have to check it out!).

It's a very nice way to compare those babies, having them all compared step by step, i'll have to try that. Though there is still a slight influence at least for the palate and finish, depending on the order in which you do taste them - how long do you wait in between each dram? get some water ?

From the photos, i guess you tasted samples since your bottles still seem to be closed ?

Can't wait for the next session - maybe you'll have something to say about general differences between bourbon/sherry Karui? This is a topic that make me wonder: blind, can you really say whether a Karui was matured in bourbon or sherry...?
March 10, 2015 at 5:31 PM

Stefan Van Eycken said…
What makes you think I only have one bottle of each of those? ;-) We try our best to post pictures that are as aesthetically pleasing as the whiskies we review...

With regards to your question as to how I compare them: this is done in two sessions (two consecutive days), whereby I go back and forth between the drams, first focusing on the nose (neat). Then, the same way for the palate and the finish, with lots of water - and sometimes also time - between going back and forth. Finally, I will add a bit of water, to see how the whiskies respond... And then, same story, the day after. So I don't finish one dram, then move on to the next, etc. but it is a continuous shuttling back and forth.
March 10, 2015 at 9:44 PM

Peter Dixon said…
Thanks Stefan, an enjoyable and thirst-inducing read. I have a suspicion I know what the follow-up piece will be about .....
March 11, 2015 at 6:35 PM

Unknown said…
Thank you for these tasting notes :)

I tasted the 1979 and 1978 but was less enthousiastic as you. I got a little sulphur in my glass. Tasted from a newly opened bottle and I hope it vanished now.

elsking last question is really interresting: how can these bourbon release be darker than the sherry ones ?
Do you still feel really disctinctive cask aroma bettween Sherry and Bourbon casks ?